Cholesterol is any of a class of certain organic molecules. A cholesterol is a sterol (or modified steroid), a type of lipid. Cholesterol is biosynthesized by all animal cells and is an essential structural component of animal cell membranes. When chemically isolated, it is a yellowish crystalline solid.

Cholesterol also serves as a precursor for the biosynthesis of steroid hormones, bile acid and vitamin D. Cholesterol is the principal sterol synthesized by all animals. In vertebrates, hepatic cells typically produce the greatest amounts. It is absent among prokaryotes (bacteria and archaea), although there are some exceptions, such as Mycoplasma, which require cholesterol for growth.

François Poulletier de la Salle first identified cholesterol in solid form in gallstones in 1769. However, it was not until 1815 that chemist Michel Eugène Chevreul named the compound "cholesterine". 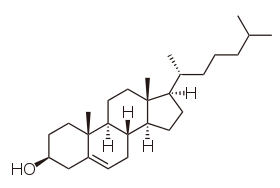 Title
Author
Date
Publisher
Description
Cholesterol levels are on the rise among Asians
June 6, 2020
Hindustan Times
The higher the levels of bad cholesterol in the body, the higher the incidence of blockages and heart attacks, that might also be fatal at times.
Cholesterol levels in the UK have dropped sharply since 1980
By Luke Andrews For Mailonline
June 3, 2020
Mail Online
The UK once had the 18th highest cholesterol level in the world for men and women. But, over 40 years, this has tumbled to 106th and 130th respectively.