Who is Charles Barkley?

Charles Wade Barkley is a former professional basketball player who is currently affiliated with the ‘Inside the NBA’ television show as one of its hosts. Regarded as one of National Basketball Association’s most dominant players, Barkley played professionally for 16 years, during which he appeared as part of three different NBA teams: Philadelphia 76ers, Phoenix Suns, and Houston Rockets. Barkley developed an interest in basketball when he was a child and played the sport through high school. Despite having a good record, he did not garner any significant interest from the college scouts until the state high school semi-finals where his performance ultimately earned him recruitment by the Auburn University. Barkley played three seasons of college football and made himself available for the NBA Draft in 1984. Over the course of his highly successful career, he was included in the All-NBA First Team five times, the All-NBA Second Team five times, and the All-NBA Third Team one time. In 1993, he was named NBA’s Most Valuable Player of the season. As part of the national squad, he won two gold medals at the 1992 and 1996 Summer Olympics and one gold medal at the 1992 FIBA Americas Championship. He retired in 2000 and since then, has built up a successful career as an NBA analyst. 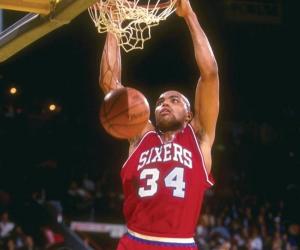 Charles Barkley enrolled at Auburn University in 1981, pursuing a degree in business administration. Smith immediately made him part of Auburn’s basketball program, the Auburn Tigers.

Barkley had problems controlling his weight throughout his college life, as he would have during his professional career. However, he excelled in the court and after three years, had the average of 14.8 points on 68.2% field goal shooting, 9.6 rebounds, 1.6 assists and 1.7 blocks per game.

In 1984, he appeared in the NCAA Tournament for the first and only time, scoring 23 points on 80% field goal shooting, 17 rebounds, four assists, two steals, and two blocks. About a year after his retirement from professional basketball, on March 3, 2001, Auburn honoured him by retiring his no. 34 jersey.

Some controversies about his time at Auburn arose many years after he left the college. In 2010, Barkley revealed that he had demanded, and was provided, money from sports agents.

He defended himself saying that the money he asked from the agents was “chump change” and then enquired, “Why can't an agent lend me some money and I'll pay him back when I graduate?" He has since maintained that he had paid back all the money he had gotten after he signed his first NBA contract.