For other uses, see Cauliflower (disambiguation).

Not to be confused with Cauliflory. 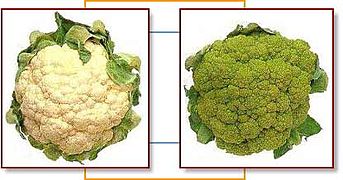 Cauliflower plants growing in a nursery

Cauliflower is one of several vegetables in the species Brassica oleracea in the genus Brassica, which is in the Brassicaceae (or Mustard) family. It is an annual plant that reproduces by seed. Typically, only the head is eaten – the edible white flesh sometimes called "curd" (with a similar appearance to cheese curd).[1] The cauliflower head is composed of a white inflorescence meristem. Cauliflower heads resemble those in broccoli, which differs in having flower buds as the edible portion. Brassica oleracea also includes broccoli, Brussels sprouts, cabbage, collard greens, and kale, collectively called "cole" crops,[2] though they are of different cultivar groups

Pliny the Elder included cyma among cultivated plants he described in Natural History: "Ex omnibus brassicae generibus suavissima est cyma,"[3] ("Of all the varieties of cabbage the most pleasant-tasted is cyma").[4] Pliny's description likely refers to the flowering heads of an earlier cultivated variety of Brassica oleracea.[5]

In the Middle Ages, early forms of cauliflower were associated with the island of Cyprus, with the 12th- and 13th-century Arab botanists Ibn al-'Awwam and Ibn al-Baitar, claiming its origin to be Cyprus.[6][7] This association continued into Western Europe, where cauliflowers were sometimes known as Cyprus colewort, and there was extensive trade in western Europe in cauliflower seeds from Cyprus, under the French Lusignan rulers of the island, until well into the 16th century.[8]

François Pierre La Varenne employed chouxfleurs in Le cuisinier françois.[9] They were introduced to France from Genoa in the 16th century, and are featured in Olivier de Serres' Théâtre de l'agriculture (1600), as cauli-fiori "as the Italians call it, which are still rather rare in France; they hold an honorable place in the garden because of their delicacy",[10] but they did not commonly appear on grand tables until the time of Louis XIV.[11] It was introduced to India in 1822 by the British.[12]

The word "cauliflower" derives from the Italian cavolfiore, meaning "cabbage flower".[13] The ultimate origin of the name is from the Latin words caulis (cabbage) and flōs (flower).[14]

Cauliflower is relatively difficult to grow compared to cabbage, with common problems such as an underdeveloped head and poor curd quality.[2] 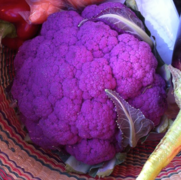 Because weather is a limiting factor for producing cauliflower, the plant grows best in moderate daytime temperatures 21–29 °C (70–85 °F), with plentiful sun, and moist soil conditions high in organic matter and sandy soils.[1] The earliest maturity possible for cauliflower is 7 to 12 weeks from transplanting.[2] In the northern hemisphere, fall season plantings in July may enable harvesting before autumn frost.[1]

Long periods of sun exposure in hot summer weather may cause cauliflower heads to discolor with a red-purple hue.[1]

Transplantable cauliflowers can be produced in containers as flats, hotbeds, or in the field. In soil that is loose, well-drained and fertile, field seedlings are shallow-planted 1 cm (1⁄2 in) and thinned by ample space – about 12 plants per 30 cm (1 ft).[1] Ideal growing temperatures are about 18 °C (65 °F) when seedlings are 25 to 35 days old.[1] Applications of fertilizer to developing seedlings begin when leaves appear, usually with a starter solution weekly.

Transplanting to the field normally begins late spring and may continue until mid-summer. Row spacing is about 38–46 cm (15–18 in). Rapid vegetative growth after transplanting may benefit from such procedures as avoiding spring frosts, using starter solutions high in phosphorus, irrigating weekly, and applying fertilizer.[1]

When cauliflower is mature, heads appear as clear white, compact, and 15–20 cm (6–8 in) in diameter, and should be cooled shortly after harvest.[1] Forced air cooling to remove heat from the field during hot weather may be needed for optimal preservation. Short-term storage is possible using cool, high-humidity storage conditions.[1]

Many species of blowflies, including Calliphora vomitoria, are known pollinators of cauliflower

There are four major groups of cauliflower.[16]

Italian: This specimen is diverse in appearance, biennial and annual in type. This group also includes white, Romanesco, various brown, green, purple, and yellow cultivars. This type is the ancestral form from which the others were derived.

Northern European annuals: Used in Europe and North America for summer and fall harvest, it was developed in Germany in the 18th century and includes the old cultivars Erfurt and Snowball.

Northwest European biennial: Used in Europe for winter and early spring harvest, this was developed in France in the 19th century and includes the old cultivars Angers and Roscoff.

Asian: A tropical cauliflower used in China and India, it was developed in India during the 19th century from the now-abandoned Cornish type[17] and includes old varieties Early Benaras and Early Patna.

There are hundreds of historic and current commercial varieties used around the world. A comprehensive list of about 80 North American varieties is maintained at North Carolina State University.[18]

The purple color in this cauliflower is caused by the presence of anthocyanins, water-soluble pigments that are found in many other plants and plant-based products, such as red cabbage and red wine.[20] Varieties include 'Graffiti' and 'Purple Cape'.

In Great Britain and southern Italy, a broccoli with tiny flower buds is sold as a vegetable under the name "purple cauliflower"; it is not the same as standard cauliflower with a purple head. 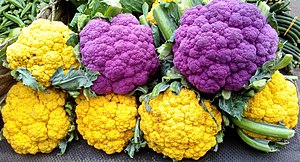 †Percentages are roughly approximated using US recommendations for adults.

Cauliflower has been noticed by mathematicians for its distinct fractal dimension,[29][30] calculated to be roughly 2.8.[31][32] One of the fractal properties of cauliflower is that every branch, or "module", is similar to the entire cauliflower. Another quality, also present in other plant species, is that the angle between "modules," as they become more distant from the center, is 360 degrees divided by the golden ratio.[33]