Catalysis (/kəˈtæləsɪs/) is the process of increasing the rate of a chemical reaction by adding a substance known as a catalyst (/ˈkætəlɪst/). Catalysts are not consumed in the reaction and remain unchanged after it. If the reaction is rapid and the catalyst recycles quickly, very small amounts of catalyst often suffice; mixing, surface area, and temperature are important factors in reaction rate. Catalysts generally react with one or more reactants to form intermediates that subsequently give the final reaction product, in the process regenerating the catalyst.

Catalysis is ubiquitous in chemical industry of all kinds. Estimates are that 90% of all commercially produced chemical products involve catalysts at some stage in the process of their manufacture.

The term "catalyst" is derived from Greek καταλύειν, katalúō, meaning "loosen" or "untie". The concept of catalysis was invented by chemist Elizabeth Fulhame, based on her novel work in oxidation-reduction experiments.

Illustrative is the disproportionation of hydrogen peroxide to water and oxygen:

The SI derived unit for measuring the catalytic activity of a catalyst is the katal, which is quantified in moles per second. The productivity of a catalyst can be described by the turnover number (or TON) and the catalytic activity by the turn over frequency (TOF), which is the TON per time unit. The biochemical equivalent is the enzyme unit. For more information on the efficiency of enzymatic catalysis, see the article on enzymes.

Catalysts generally react with one or more reactants to form intermediates that subsequently give the final reaction product. In the process, the catalyst is regenerated. In principle, often only small amounts of catalysts are required to increase the rate of the reaction. In practice, however, catalysts are sometimes slow or are even consumed in secondary processes. The catalyst does often appear in the rate equation.

As a simple example in the gas phase, the reaction 2 SO2 + O2 → 2 SO3 can be catalyzed by adding nitric oxide. The reaction mechanism occurs in two steps:

The overall reaction is the first equation plus twice the second reaction, so that the NO catalyst is regenerated and does not participate in the net reaction. The overall rate is the rate of the slow step

As an example of a detailed mechanism for heterogeneous catalysis at a surface, when oxygen and hydrogen combine on the surface of titanium dioxide (TiO2, or titania) to produce water. Scanning tunneling microscopy showed that the molecules undergo adsorption, dissociation, and diffusion before reacting. The intermediate reaction states were: HO2, H2O2, then H3O2 and the final reaction product (water molecule dimers), after which the water molecule desorbs from the catalyst surface.

Catalysts work by providing an (alternative) mechanism involving a different transition state and lower activation energy. Consequently, more molecular collisions have the energy needed to reach the transition state. Hence, catalysts can enable reactions that would otherwise be blocked or slowed by a kinetic barrier. The catalyst may increase reaction rate or selectivity, or enable the reaction at lower temperatures. This effect can be illustrated with an energy profile diagram.

In the catalyzed elementary reaction, catalysts do not change the extent of a reaction: they have no effect on the chemical equilibrium of a reaction because the rate of both the forward and the reverse reaction are both affected (see also thermodynamics). The second law of thermodynamics describes why a catalyst does not change the chemical equilibrium of a reaction. Suppose there was such a catalyst that shifted an equilibrium. Introducing the catalyst to the system would result in a reaction to move to the new equilibrium, producing energy. Production of energy is a necessary result since reactions are spontaneous only if Gibbs free energy is produced, and if there is no energy barrier, there is no need for a catalyst. Then, removing the catalyst would also result in reaction, producing energy; i.e. the addition and its reverse process, removal, would both produce energy. Thus, a catalyst that could change the equilibrium would be a perpetual motion machine, a contradiction to the laws of thermodynamics. Thus, catalyst does not alter the equilibrium constant. (A catalyst can however change the equilibrium concentrations by reacting in a subsequent step. It is then consumed as the reaction proceeds, and thus it is also a reactant. Illustrative is the base-catalyzed hydrolysis of esters, where the produced carboxylic acid immediately reacts with the base catalyst and thus the reaction equilibrium is shifted towards hydrolysis.) 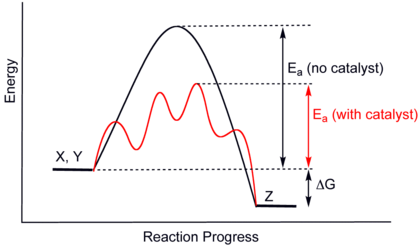 Generic potential energy diagram showing the effect of a catalyst in a hypothetical exothermic chemical reaction X + Y to give Z.

Some so-called catalysts are really precatalysts. Precatalysts convert to catalysts in the reaction. For example, Wilkinson's catalyst RhCl(PPh3)3 loses one triphenylphosphine ligand before entering the true catalytic cycle. Precatalysts are easier to store but are easily activated in situ. Because of this preactivation step, many catalytic reactions involve an induction period.

In tandem catalysis two or more different catalysts are coupled in a one-pot reaction.

In autocatalysis, the catalyst is a product of the overall reaction, in contrast to all other types of catalysis considered in this article. The simplest example of autocatalysis is a reaction of type A + B → 2 B, in one or in several steps. The overall reaction is just A → B, so that B is a product. But since B is also a reactant, it may be present in the rate equation and affect the reaction rate. As the reaction proceeds, the concentration of B increases and can accelerate the reaction as a catalyst. In effect, the reaction accelerates itself or is autocatalyzed. An example is the hydrolysis of an ester such as aspirin to a carboxylic acid and an alcohol. In the absence of added acid catalysts, the carboxylic acid product catalyzes the hydrolysis.