Refers to the recycling of waste carbon dioxide captured from industrial processes for new products. 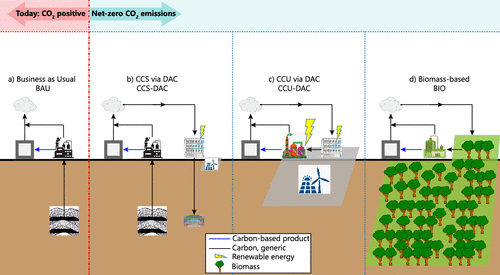 In recent years, several institutions and programs, such as the U.S. Department of Energy, the NRG COSIA Carbon X-PRIZE, Natural Resources Canada, and Emissions Reduction Alberta have expressed interest in, and supported, the development of new technologies using carbon dioxide emissions through funding and grant facilities. At the same time, there is an increased recognition of the importance of such technologies in the context of climate mitigation in academic, regulatory, and corporate environments.

There has also been an increase in the emergence of companies incorporating carbon dioxide emissions into their feedstock for polymers and concrete, among other products. These companies have emerged as the demand for low-carbon construction materials has expanded. The prospective use of waste carbon in the construction of those materials will increase and where these materials will find wider acceptance. Concrete is an example where low-carbon concrete, and low-carbon concrete aggregate, is used to decrease the overall environmental impact of the use of concrete and to market projects as low-carbon.

Carbon utilization technologies can transform waste streams of carbon into value-added products, including the development of enabling technologies such as life cycle analyses and the use of waste carbon for the production of hydrogen. The four main technological pathways from carbon utilization including carbon uptake, carbon conversion, carbon mineralization, and services. 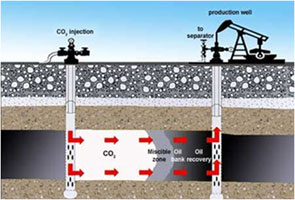 Services, or carbon direct use, describes the use of captured carbon dioxide without any conversion or technological manipulation and is the most widely practiced form of carbon utilization. Enhanced oil recovery (EOR) is one of the more common carbon direct uses. In EOR, the waste carbon dioxide is injected into an oil well to force out the crude oil and deplete the oil field. Other uses of captured waste carbon dioxide include making the bubbles in carbonated drinks, the foam in fire extinguishers and refrigerants, and use in the pharmaceutical industry and water treatment.

Carbon uptake is often done through algae or other efficient photosynthetic organisms. The biomass produced in algae systems can be processed and converted into a variety of products, including fuels, biofuels, specialty chemicals, soil supplements, and animal feed products. Carbon uptake is a technology that has reached commercial maturity. The technology has yielded small high value-added productions of pigments, omega 3, and have prospects for biological utilization.

Carbon conversion includes conversion pathways such as thermochemical, electrochemical, photochemical, and microbially-mediated approaches. Some technologies also require catalysts or integrated processes to lower the energy needed to drive these systems. Through conversion, waste carbon can be turned into synthetic fuels, chemicals, plastics, and solid carbon products. One of the main chemical utilizations of carbon dioxide is to produce urea, a substance used in nitrogen fertilizer in farming, and it can be used to produce salicylic acid, from which aspiring is derived. Captured and converted carbon dioxide can also be used in the manufacturing of polycarbonates and for hardening concrete.

Microalgae absorbs CO2 and can then be converted into proteins, fertilizers, and biomass for biofuels

Presents a competitive source of biofuel, can use flue gas directly, results in permanent storage and 1 tonne of algae can fix 1.8 tonnes of CO2

CO2 reacted with a mineral or industrial waste products. Resulting new compound can be used in construction, as a consumer product, or an alternative to Carbon Capture and Storage

Waste CO2 flue gas stream used to cure precast concrete. CO2 is stored as an unreactive limestone within the concrete.

This technology is low cost versus traditional curing, can use flue gas directly, offers a carbon offset opportunity, and offers the potential for low carbon consumer product capable of growing beyond a niche market

Produces potable water or treats process-affected water, can provide a revenue stream or opportunity to offset costs in a system committed to Carbon Capture and Storage.

CO2 is injected into partially depleted coal seams, where its absorbed by coal, in turn displacing methane to the surface for it to be captured and consumed as fuel

Through this technology, methane could replace more carbon-intensive fuel sources and provides the opportunity for permanent CO2 storage.

This technology can improve the efficiency of a clean energy resources and provides permanent CO2 storage.

CO2 injected into an existing oil well to increase pressure and reduce the viscosity of the oil, increasing the amount of oil can be recovered

This is a mature technology which offers permanent storage of CO2 and can offset the costs of carbon capture.

CO2 and hydrogen catalytically converted to methanol, which can be blended with gasoline

The energy carrier could replace fossil fuels, reducing dependence on conventional fuel for transport and other uses

The technology can use flue gas directly, offers a large potential use of CO2, diversity of possible products (including plastic bags, laminates, automobiles, and medical components), and can use existing infrastructure.

Ammonia and CO2 converted to urea for fertilizer

This is a mature technology already and the use of carbon dioxide reduces the emissions intensity of process.

Sandia National Laboratories is using waste carbon dioxide used in place of steam for turbine-generate electricity has gained interested. In the process, the carbon dioxide is heated and pressurized into a supercritical fluid (meaning between a liquid and a gas) that can replace steam. The supercritical carbon dioxide transfers heat more efficiently and requires less energy to compress, resulting in more electricity production for the same amount of energy input.

Researchers at UNIST in South Korea and the Georgia Institute of Technology has developed technology using seawater and sodium hydroxide which captures carbon dioxide, and as the acidity increases, the number of protons increase and draw electrons to create electrical energy and hydrogen. The researchers think the technology could eventually be used to create batteries converting carbon dioxide into energy.

C2CNT, a finalist of the NRG COSIA Carbon X-PRIZE, has found a way to produce carbon nanotubes more cheaply than usual. The technology uses low-cost nickel and steel electrodes and low voltage current to create carbon nanotubes from flue gas that conduct electricity better than copper. These nanotubes can be used in steel, aluminum, textiles, ceramics, cements, electronics, packaging, manufacturing, and construction.

DyeCoo, a Dutch Company, has begun using waste carbon dioxide in their dyeing process. The technology pressurizes carbon dioxide so that it becomes supercritical and allows dye to readily dissolve, meaning the dyes need no chemical processing and can enter easily into fabrics. The process uses no chemicals or water, produces no wastewater, and requires no drying time. And 95 percent of the carbon dioxide used is recaptured and reused, meaning the system is a largely closed loop system and costs are reduced by 40 to 60 percent. The technology is used in Nike, Ikea, Adidas and Peak Performance products.

There are several challenges to carbon utilization technology and the adoption of the technology, including high capital and operating costs, low practical carbon reduction and sequestration capacities, ecological side effects, performance uncertainties, low technology readiness levels, a lack of enforced carbon regulations and a lack of feasible scale deployment. All carbon utilization sectors face challenges to commercialization in terms of technology, cost, or market acceptance. Three main underlying challenges are:

Captured carbon dioxide as a raw material is technologically challenging. The capture of carbon dioxide is difficult, and to process and make the carbon dioxide feasible for use is more expensive than terrestrial and traditional carbon capture and mining efforts. The use of low-carbon materials, as well, such as those used in concrete and concrete aggregate, are not price competitive compared to traditional concrete and aggregate products. And for fuels, chemicals, and plastics, which can be put together due to the similarity of their production processes, is the technology and cost needed to operate at commercial scale.

A large challenge to the costs and difficulties for carbon utilization and its larger acceptance is the acceptance of carbon offsets and credits. The more popular version of this is reforestation projects, where company's can purchase these credits or offsets and are then enabled, in many jurisdictions, to label their products as "green" or "low-carbon".

Many of these challenges could be solved through support from governments. The support could come from government policy changes, financial enablement, research and development support, development of carbon dioxide transportation infrastructure, and a market preference for "green" or "low-carbon" labelling.

Capturing Carbon's Potential: These Companies Are Turning CO2 into Profits

Carbon Utilization - A Vital and Effective Pathway for Decarbonization

Climate change: pulling CO2 out of the air could be a trillion-dollar business

Novel Carbon Dioxide Utilization Technologies: A Means to an End

The technological and economic prospects for CO2 utilization and removal

Carbon Capture & Utilisation: How to close the carbon balance

Total - What is CCUS?