A city in northwestern Turkey and the administrative center of Bursa Province.

Bursa (Turkish pronunciation: [buɾsa]; Ottoman Turkish: بورسه, Latin: Prusa) is a city in northwestern Turkey and the administrative center of Bursa Province. The fourth-most populous city in Turkey and second-most populous in the Marmara Region, Bursa is one of the industrial centers of the country. Most of Turkey's automotive production takes place in Bursa.

Bursa was the first major and second overall capital of the Ottoman State between 1335 and 1363. The city was referred to as Hüdavendigar (خداوندگار, meaning "God's gift" in Ottoman Turkish, a name of Persian origin) during the Ottoman period, while a more recent nickname is Yeşil Bursa ("Green Bursa") in reference to the parks and gardens located across its urban fabric, as well as to the vast and richly varied forests of the surrounding region. Mount Uludağ, the ancient Mysian Olympus, towers over it, and has a well-known ski resort. Bursa has rather orderly urban growth and borders a fertile plain. The mausoleums of the early Ottoman sultans are located in Bursa, and the city's main landmarks include numerous edifices built throughout the Ottoman period. Bursa also has thermal baths, old Ottoman mansions, palaces, and several museums.

The shadow play characters Karagöz and Hacivat are based on historic personalities who lived and died in Bursa in the 14th century.

The earliest known human settlement near Bursa's current location was at Ilıpınar Höyüğü around 5200 BC. It was followed by the ancient Greek city of Cius, which Philip V of Macedon granted to Prusias I, the King of Bithynia, in 202 BC. King Prusias rebuilt the city with the advice of general Hannibal of Carthage, who took refuge with Prusias after losing the war with the Roman emperor and renamed it Prusa. (Ancient Greek: Προῦσα; sometimes rendered as Prussa). After 128 years of Bithynian rule, Nicomedes IV, the last King of Bithynia, bequeathed the entire kingdom to the Roman Empire in 74 BC. An early Roman Treasure was found in the vicinity of Bursa in the early 20th century. Composed of a woman's silver toilet articles, it is now in the British Museum.

Bursa (from the Greek "Prusa") became the first major capital city of the early Ottoman Empire following its capture from the Byzantines in 1326. As a result, the city witnessed a considerable amount of urban growth throughout the 14th century. After conquering Edirne (Adrianople) in East Thrace, the Ottomans turned it into the new capital city in 1363, but Bursa retained its spiritual and commercial importance in the Ottoman Empire. The Ottoman sultan Bayezid I built the Bayezid Külliyesi (Bayezid I theological complex) in Bursa between 1390 and 1395 and the Ulu Cami (Grand Mosque) between 1396 and 1400. After Bayezid was defeated in the Battle of Ankara by the forces Timur in 1402, the latter's grandson, Muhammad Sultan Mirza, had the city pillaged and burned. Despite this, Bursa remained to be the most important administrative and commercial centre in the empire until Mehmed II conquered Constantinople in 1453. The population of Bursa was 45,000 in 1487.

During the Ottoman period, Bursa continued to be the source of most royal silk products. Aside from the local silk production, the city imported raw silk from Iran, and occasionally from China, and was the main production centre for the kaftans, pillows, embroidery and other silk products for the Ottoman palaces until the 17th century. As it was a significant cultural and trade hub, traders, most of whom were Armenians, became very wealthy. However, this legacy of cultural pluralism in Bursa almost entirely ended due to the events that took place from 1895 to 1925, namely the Hamidian massacres, the Armenian genocide, and the population exchange. The most influential study of Bursa's silk trade and economic history is the work of Ottomanist Halil İnalcık.

Following the foundation of the Republic of Turkey in 1923, Bursa became one of the industrial centres of the country. The economic development of the city was followed by population growth and Bursa became the 4th most populous city in Turkey.

The city has traditionally been a pole of attraction, and was a major centre for refugees from various ethnic backgrounds who immigrated to Anatolia from the Balkans during the loss of the Ottoman territories in Europe between the late 19th and early 20th centuries. The most recent arrival of Balkan Turks took place between the 1940s and 1990s, when the People's Republic of Bulgaria expelled approximately 150,000 Bulgarian Turks to Turkey. About one-third of these 150,000 Bulgarian Turkish refugees eventually settled in Bursa (especially in the Hürriyet neighborhood). With the construction of new industrial zones in the period between 1980 and 2000, many people from the eastern provinces of Turkey came and settled in Bursa.

Bursa stands on the northwestern slopes of Mount Uludağ (known as the Mysian Olympus in classical antiquity), on the banks of the Nilüfer River, in the southern Marmara Region. It is the capital city of Bursa Province, which borders the Sea of Marmara and Yalova to the north; Kocaeli and Sakarya to the northeast; Bilecik to the east; and Kütahya and Balıkesir to the south.

Bursa has a Mediterranean climate (Köppen climate classification: Csa) under the Köppen classification, and dry-hot summer subtropical climate (Csa) under the Trewartha classification. The city has hot, dry summers that last from June until September. Winters are cool and damp, also containing the most rainfall. There can be snow on the ground which will last for a week or two. Air pollution is a chronic problem in Bursa.

Bursa is the largest production centre of the Turkish automotive industry.[18] Factories of motor vehicle producers like Fiat, Renault and Karsan, as well as automotive parts producers like Bosch, Mako, Valeo, Johnson Controls, Delphi have been active in the city for decades. The textile and food industries are equally strong, with Coca-Cola, Pepsi Cola and other beverage brands, as well as fresh and canned food industries being present in the city's organized industrial zones.

Apart from its large automotive industry, Bursa also produces a substantial amount of dairy products (by Sütaş), processed food (by Tat), and beverages (by Uludağ).

Traditionally, Bursa was famous for being the largest centre of silk trade in the Byzantine and later the Ottoman empires, during the period of the lucrative Silk Road. The city is still a major centre for textiles in Turkey and is home to the Bursa International Textiles and Trade Centre (Bursa Uluslararası Tekstil ve Ticaret Merkezi, or BUTTIM). Bursa was also known for its fertile soil and agricultural activities, which have decreased in the recent decades due to the heavy industrialization of the city.

Bursa is a major centre for tourism. One of the most popular skiing resorts of Turkey is located at Mount Uludağ, just next to the city proper. Bursa's thermal baths have been used for therapeutical purposes since Roman times. Apart from the baths that are operated by hotels, Uludağ University has a physical therapy centre which also makes use of thermal water.

Bursa has a metro (Bursaray), trams and bus system for inner-city public transport, while taxi cabs are also available. Bursa's Yenişehir Airport is 20 mi (32 km) away from the city centre. The citizens of Bursa also prefer Istanbul's airports such as Istanbul Airport and Sabiha Gökçen International Airport for flights to foreign countries, due to Istanbul's proximity to Bursa. There are numerous daily bus and ferry services between the two cities.

The only railway station in Bursa is the Harmancık station on the Balıkesir-Kütahya railway, which was opened in 1930.

Istanbul Commerce University has opened graduate programs in Bursa in 2013.

The Bursa Sports High School is located in Osmangazi district.

The city has one professional football club, Bursaspor, which formerly competed in the Süper Lig (Super League), the top-tier of Turkish football, until finishing 16th at the end of the 2018–19 Süper Lig season and being relegated to the TFF First League. A few years earlier, Bursaspor had managed to become the Turkish champions at the end of the 2009–10 Süper Lig season, thereby becoming the second Anatolian club to ever win the Süper Lig championship title after Trabzonspor. Henceforth, Bursaspor was often considered to be one of the five biggest football clubs in Turkey, along with Galatasaray, Fenerbahçe, Beşiktaş and Trabzonspor. The club's relegation to the TFF First League at the end of the 2018–19 season was a major shock for its fans and became a first in the history of Turkish football: Never before a club which had won the Süper Lig championship title was relegated.

Bursaspor plays its home games at the Timsah Arena (meaning "Crocodile Arena", crocodile being the mascot of the team), which has a seating capacity of 45,000.

The city has a professional basketball team in the Turkish Basketball League, Tofaş S.K., which is among the most successful teams. The club plays its games at the Tofaş Nilüfer Sports Hall.

The current Mayor of the Bursa Metropolitan Municipality is Alinur Aktaş from the Justice and Development Party (AKP), in office since 2019, the AKP coalition won 49.6% of the vote against the CHP coalition which got 47% of the vote.

Ulu Cami is the largest mosque in Bursa and a landmark of early Ottoman architecture, which incorporated many elements from Seljuk architecture. Ordered by Sultan Bayezid I, the mosque was designed and built by architect Ali Neccar in 1396–1400. It is a large and rectangular building, with a total of twenty domes that are arranged in four rows of five, and are supported by 12 columns. Supposedly the twenty domes were built instead of the twenty separate mosques which Sultan Bayezid I had promised for winning the Battle of Nicopolis in 1396. The mosque has two minarets.

Inside the mosque there are 192 monumental wall inscriptions written by the famous calligraphers of that period. There is also a fountain (şadırvan) where worshipers can perform ritual ablutions before prayer; the dome over the şadırvan is capped by a skylight which creates a soft, serene light below; thus playing an important role in the illumination of the large building.

The horizontally spacious and dimly lit interior is designed to feel peaceful and contemplative. The subdivisions of space formed by multiple domes and pillars create a sense of privacy and even intimacy. This atmosphere contrasts with the later Ottoman mosques (see for example the works of Suleiman the Magnificent's chief architect Mimar Sinan.) The mosques that were built after the conquest of Constantinople (Istanbul) by the Ottoman Turks in 1453, and influenced by the design of the 6th century Byzantine basilica of Hagia Sophia, had increasingly elevated and large central domes, which create a vertical emphasis that is intended to be more overwhelming; in order to convey the divine power of Allah, the majesty of the Ottoman Sultan, and the governmental authority of the Ottoman State.

Bayezid I Mosque and külliye 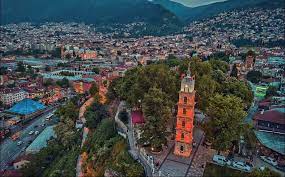 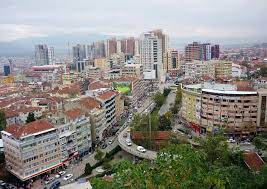 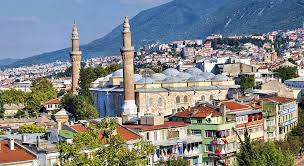 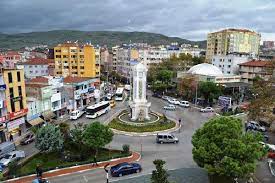 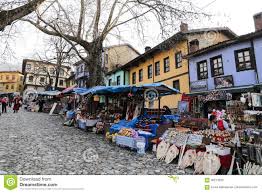 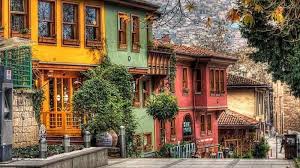 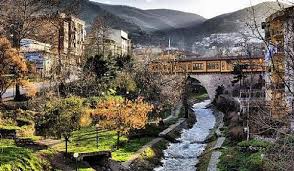 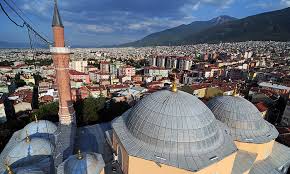 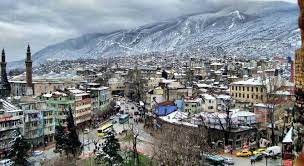