Pandemic in europe and asia in the 1300s

The Black Death (also known as the Pestilence, the Great Mortality or the Plague[a]) was a bubonic plague pandemic occurring in Afro-Eurasia from 1346 to 1353. It is the most fatal pandemic recorded in human history, causing the death of 75–200 million people in Eurasia and North Africa, peaking in Europe from 1347 to 1351. Bubonic plague is caused by the bacterium Yersinia pestis spread by fleas, but it can also take a secondary form where it is spread person-to-person contact via aerosols causing septicaemic or pneumonic plagues

The Black Death was the beginning of the second plague pandemic. The plague created religious, social and economic upheavals, with profound effects on the course of European history.

The origin of the Black Death is disputed. The pandemic originated either in Central Asia or East Asia but its first definitive appearance was in Crimea in 1347. From Crimea, it was most likely carried by fleas living on the black rats that travelled on Genoese ships, spreading through the Mediterranean Basin and reaching Africa, Western Asia and the rest of Europe via Constantinople, Sicily and the Italian Peninsula. There is evidence that once it came ashore, the Black Death mainly spread person-to-person as pneumonic plague, thus explaining the quick inland spread of the epidemic, which was faster than would be expected if the primary vector was rat fleas causing bubonic plague.

The Black Death was the second great natural disaster to strike Europe during the Late Middle Ages (the first one being the Great Famine of 1315–1317) and is estimated to have killed 30 percent to 60 percent of the European populationThe plague might have reduced the world population from c.  475 million to 350–375 million in the 14th century. There were further outbreaks throughout the Late Middle Ages and, with other contributing factors (the Crisis of the Late Middle Ages), the European population did not regain its level in 1300 until 1500. Outbreaks of the plague recurred around the world until the early 19th century. 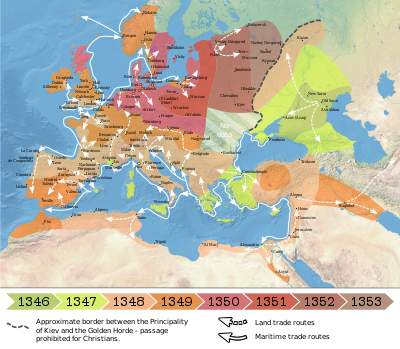 European writers contemporary with the plague described the disease in Latin as pestis or pestilentia, 'pestilence'; epidemia, 'epidemic'; mortalitas, 'mortality'.In English prior to the 18th century, the event was called the "pestilence" or "great pestilence", "the plague" or the "great death". Subsequent to the pandemic "the furste moreyn" (first murrain) or "first pestilence" was applied, to distinguish the mid-14th century phenomenon from other infectious diseases and epidemics of plague. The 1347 pandemic plague was not referred to specifically as "black" in the 14th or 15th[contradictory] centuries in any European language, though the expression "black death" had occasionally been applied to fatal disease beforehand. 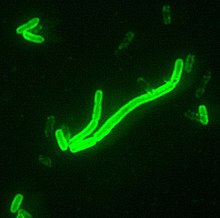 "Black death" was not used to describe the plague pandemic in English until the 1750s; the term is first attested in 1755, where it translated Danish: den sorte død, lit. 'the black death'.This expression as a proper name for the pandemic had been popularized by Swedish and Danish chroniclers in the 15th and early 16th centuries, and in the 16th and 17th centuries was transferred to other languages as a calque: Icelandic: svarti dauði, German: der schwarze Tod, and French: la mort noire. Previously, most European languages had named the pandemic a variant or calque of the Latin: magna mortalitas, lit. 'Great Death'

The phrase 'black death' – describing Death as black – is very old. Homer used it in the Odyssey to describe the monstrous Scylla, with her mouths "full of black Death" (Ancient Greek: πλεῖοι μέλανος Θανάτοιο, romanized: pleîoi mélanos Thanátoio). Seneca the Younger may have been the first to describe an epidemic as 'black death', (Latin: mors atra) but only in reference to the acute lethality and dark prognosis of disease. The 12th–13th century French physician Gilles de Corbeil had already used atra mors to refer to a "pestilential fever" (febris pestilentialis) in his work On the Signs and Symptoms of Diseases (De signis et symptomatibus aegritudium). The phrase mors nigra, 'black death', was used in 1350 by Simon de Covino (or Couvin), a Belgian astronomer, in his poem "On the Judgement of the Sun at a Feast of Saturn" (De judicio Solis in convivio Saturni), which attributes the plague to an astrological conjunction of Jupiter and Saturn. His use of the phrase is not connected unambiguously with the plague pandemic of 1347 and appears to refer to the fatal outcome of disease.[

The historian Cardinal Francis Aidan Gasquet wrote about the Great Pestilence in 1893[ and suggested that it had been "some form of the ordinary Eastern or bubonic plague".[c] In 1908, Gasquet claimed that use of the name atra mors for the 14th-century epidemic first appeared in a 1631 book on Danish history by J. I. Pontanus: "Commonly and from its effects, they called it the black death" (Vulgo & ab effectu atram mortem vocitabant

Encyclopedia of Plague and Pestilence

Was the Black Death in India and China?

Search on Google News
Search on Bing News
Title
Author
Date
Publisher
Description
5,000-year-old bacteria is the oldest strain of plague ever seen. Scientists found it in the ancient bones of a Stone Age man.
Aylin Woodward
June 29, 2021
news.yahoo.com
The oldest version of the plague that we know of infected a Stone Age hunter-gatherer millennia before the Black Death, a new study shows.
What the History of Pandemics Can Teach Us About Resilience
Anna North
April 1, 2021
www.nytimes.com
Widespread disease outbreaks have the potential to shock societies into new ways of living.
Owning databases that we help build: Can it end capitalism as we know it?
Andy Mukherjee | Bloomberg
December 28, 2020
@bsindia
Sacrificing some more of our freedom to eternal state surveillance could become a deal with a devil were growing to know only too well
Will the Coronavirus Evolve to Be Less Deadly?
Wendy Orent, Undark
November 16, 2020
Smithsonian Magazine
History and science suggest many possible pathways for pandemics, but questions remain about how this one will end
How do pandemics end? In different ways, but it's never quick and never neat
Mark Honigsbaum
October 18, 2020
the Guardian
Just like the Black Death, influenza and smallpox, Covid-19 will affect almost every aspect of our of lives - even after a vaccine turns up
SHOW MORE