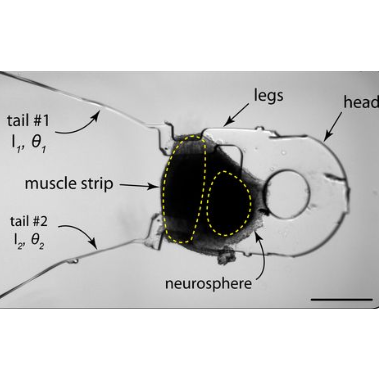 Researchers at University of Illinois developed soft robotic devices driven by neuromuscular tissue that triggers when stimulated by light using optogenetics, which was published in 2019 in PNAS. In 2014, the team developed self-propelled biohybrid swimming and walking biobots that uses cardiac muscle cells from rats, which beat on their own, as motors. Their swimming biobots were modeled after sperm, with a single tail. In the 2019 version, optogenetic neuron cells, derived from mouse stem cells, were added to their device. The biobots self assemble since neurons advanced towards the muscle and formed neuromuscular junctions. The resulting neuromuscular tissue worked with their synthetic biobot skeletons. Muscle activity is controlled by neuron activity, which is controlled by exposure to light using optogenetics.