Automatic Doors are doors that open automatically upon sensing approach of a person.

Automatic door or auto door is a door that opens automatically when sensing the approach of a person. Automatic doors effectively contribute to energy saving and reduce annual heating and cooling costs. Doors open only when activated and automatically close so to eliminate the doors being left open. They also prevent air-conditioning from escaping and outside air and dust from entering.

Historians believe that Heron of Alexandria, a Greek mathematician and engineer, invented the first automatic doors in 1st century AD. He used a hydraulic system that relied on heavy water displacement to move the doors of a Greek temple in Alexandria.

In the 17th century, according to historian Joseph Needham, a foot sensor-activated automatic door was constructed in the royal library of China during the of Emperor Yang of Sui in 604 to 618.

In 1954, Americans Dee Horton and Lew Hewitt were credited as the inventors of the first automatic doors. They used a mat actuator and installed the first automatic door in 1960 in Corpus Christi, Texas. The first commercial automatic sliding doors appeared on the market the same year. Automatic sliding doors became widespread in commercial buildings such as banks, hotels, and public buildings.

In the 1970s, motion detectors were invented to activate sliding doors.

Active infrared presence sensors were introduced in the 1990s. The automatic revolving doors and the first automatic folding doors were launched and motion detector activation became a standard for sliding doors.

Today, automatic doors are triggered by optic or motion sensors to ensure that they open as soon as we approach them.

Automatic door opens when the door controller receives an activation signal by the sensor and activate the gear motor to drive the belt and pulley. When no one is detected inside the activation area, the door starts closing after a designated period of time. 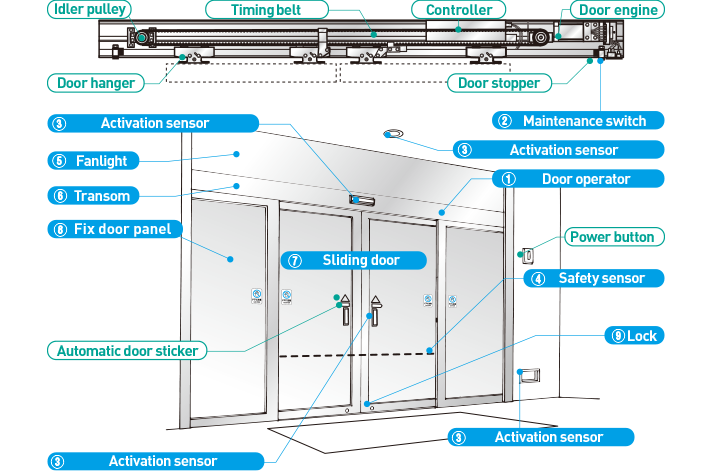 Parts of an Automatic Sliding Door