Since 1999, he began to play for the reserve team of Zenit. At the age of 19, he made his debut in the main squad. On August 2, 2000, Yuri Morozov released him as a substitute instead of Andrei Kobelev in an away match of the Intertoto Cup against English Bradford City (3-0).

Arshavin spent the 2001 season in the main squad, playing in 29 matches. In an away match with Voronezh "Torch" scored the first goal of his career. At the end of the season, he won bronze medals with Zenit and entered the list of the 33 best football players of the Russian championship. From 2001 to 2006, Arshavin formed, together with another pupil of Morozov, Alexander Kerzhakov, a "golden bunch" at Zenit, which broke up after Kerzhakov left for Sevilla. Many experts called this bundle the best in the championship at that time.

In 2002, he could have ended up in Spartak Moscow, but negotiations ended when Spartak head coach Oleg Romantsev told Arshavin that he saw him only in the position of right midfielder.

On November 1, 2003, Arshavin scored his first career hat-trick in a match against Saturn near Moscow. The match ended with a score of 3:1. In 2003, Arshavin gave ten assists in the Russian championship (the team won silver medals based on its results), after which Andrey gained a reputation as one of the best assistants of the Russian championship. At the end of the 2004 season, Arshavin became the best assistant of the Russian championship, giving 16 assists (sharing this achievement with Dmitry Loskov from Lokomotiv). Despite the fact that in 2006 Zenit became only the fourth in the championship, Arshavin spent the season at a high level and according to its results was recognized as the footballer of the year in three versions at once: the RFU, the Sports Express and Football editions.

In the 2007 season, Arshavin, together with Pavel Pogrebnyak, formed a new attacking bundle at Zenit and helped his team become the champion of Russia for the first time in 23 years. Andrey himself again became the best assistant of the tournament that season (giving 13 assists) and scored 10 goals, becoming one of the top scorers of the championship (Pogrebnyak, who became the top scorer of Zenit that season, managed to distinguish himself 11 times). During the season, Arshavin briefly became the captain of Zenit, but soon the captain's armband passed to Anatoly Tymoshchuk. In the match for the Russian Super Cup against Lokomotiv, Andrey first opened the account, taking advantage of a mistake by the goalkeeper of the "railwaymen" Ivan Levenets, and then gave an assist to Pogrebyanka, bringing his team a victory with a score of 2:1. Following the results of the match, the midfielder was recognized as his best player.

The peak of Arshavin's performance at Zenit was the game in the winning UEFA Cup for the St. Petersburg team. The team passed strong opponents by European standards step by step at the playoff stage, and Arshavin was the leader of the blue-white-blue attacks, scoring several important goals (one of them at the 1/8 finals stage against Olympique Marseille, which allowed to turn the tide of the confrontation in the return match) and giving a number of key assists. In the final match against the Scottish Rangers, Arshavin first gave an assist to Igor Denisov, and then participated in the combination that led to Konstantin Zyryanov's goal. The match ended with Zenit winning 2-0, and Arshavin was recognized as the best player of the match. In the same year, Arshavin won the European Super Cup.

After a successful performance in the UEFA Cup and at Euro 2008, Arshavin became one of the contenders for the Golden Ball according to France Football magazine and took 6th place, which is the best result for a Russian football player after the collapse of the USSR. In the voting, Arshavin was ahead of such players as Cristiano Ronaldo, Lionel Messi, Fernando Torres, Iker Casillas and Xavi. Arshavin's outstanding performance attracted the attention of the leading top clubs in Europe.

He scored his last goal for Zenit on October 18, 2008 in the match of the 25th round of the Russian Championship against Spartak Nalchik, and on December 10 he played his last match for the club in the Champions League group stage match against Real Madrid. In just nine seasons with Zenit, Arshavin played 310 official matches, scoring 71 goals and won five trophies with the team.

A few minutes before the closing of the winter transfer window in the English Premier League, he signed a contract with Arsenal in London, the transfer amount was 15 million pounds, the agreement was calculated until June 2012.[source not specified 74 days]

Arshavin made his Arsenal debut on February 21, 2009 in a home match with Sunderland (0:0). On March 14, 2009, in an English Premier League match against Blackburn, he scored his first goal for Arsenal in the 65th minute, although in the first half he was injured as a result of a collision with Blackburn defender Oyer: eight stitches were applied to Arshavin during the break.

On April 21, 2009, Andrey Arshavin scored 4 goals in an away Premier League match against Liverpool and became the first player who managed to make poker at the Anfield Road stadium in the framework of the English Championship in the last 63 years. The game ended with a score of 4:4. 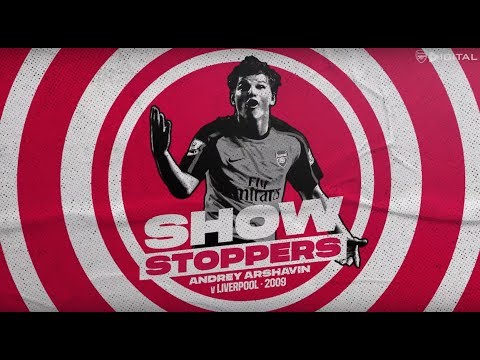 On May 2, Arsenal's semi-reserve squad came out against Portsmouth, as the team had a second leg of the Champions League semi-final three days later. Arshavin did not participate in this semi-final, because he had already played for Zenit in the Champions League and was not eligible to play with Manchester United. In the game with Portsmouth, Arshavin came out as the captain of the team. The match ended with the victory of the Gunners (3-0). On May 8, he was recognized as the best player of the Premier League in April. Arshavin became the second Russian legionnaire to ever receive this award. Before him, this was achieved by Andrei Kanchelskis in April 1996.

Arshavin takes a corner in April 2009

In May 2009, a number of media outlets spread the news that Arshavin allegedly intends to seek an increase in his salary, since when signing the contract he was not aware of some features of English legislation (in particular, tax increases up to 50%) and as a result receives less than he expected. In June, Andrey clarified that his difficulties were not related to taxes, and he hopes to solve certain problems within the next two weeks. A little later it was reported that Arshavin refused the services of his agent.

On August 26, 2009, Andrey Arshavin scored his first goal in the Champions League, entering the field in the 72nd minute and hitting the Celtic goal in the 74th. On August 29, Manchester United hosted Arsenal in the fourth round of the English Championship. The first half ended with a score of 0:1 in favor of the Gunners, the author of the ball was Arshavin. However, a penalty goal and Diaby's own goal did not allow Arsenal to take points in this match, which ended with a score of 2:1. Arshavin spent 81 minutes on the field, after which he was replaced. Later it became known that Andrei was playing with an injury, because of which he could not spend the entire 90 minutes on the field.

On November 4, in the home match of the 4th round of the Champions League group stage against the Dutch champion AZ Arshavin made 3 assists that helped Arsenal win with a score of 4:1. Arsene Wenger praised Andrey's performance in this match: "Arshavin showed an outstanding game. Throughout the match, he made great passes. This is a sign of high class."

On November 7, 2009, in an away match with Wolverhampton, Arshavin scored his 10th goal in the English Premier League in the 66th minute. It took him 21 matches to do this. On December 5, in a match with Stoke City, he scored his hundredth goal at the highest level, thereby getting into the "Club 100".

Arshavin started the 2010/11 season as a strong foundation player, but by the middle of the season, with the return of a number of Gunners players, Andrei began to start matches from the bench. In total, he scored 6 goals and gave 11 assists in the championship (becoming one of the leaders in this indicator). In the 1/8 finals of the Champions League 2010/11 in the first match against Barcelona, Arshavin came on as a substitute and scored the winning goal, but Arsenal failed to reach the next round, losing 3:4 on aggregate. Nevertheless, since 2011, Arshavin has ceased to be a player in the main squad of the Gunners, mostly coming on as a substitute at the end of matches and often receiving low marks for the game.

Arshavin celebrates a goal for Zenit with a "heart" gesture

On February 24, 2012, two minutes before the closing of the transfer window in Russia, Arshavin was loaned to Zenit until the end of the 2011/2012 championship. Information about the transition on their official websites was confirmed by Arshavin and Zenit. At the same time, Zenit will pay Arshavin's salary in full and will pay Arsenal 1 million euros.

Arshavin's debut match after his return was the meeting of the 33rd round of the Russian Championship against CSKA, which ended with a score of 2:2. Andrey himself did not show anything useful and was replaced in the 55th minute.

In the match of the 39th round against CSKA, Arshavin came on as a substitute in the second half, first starting a combination, after which Vladimir Bystrov opened the score, and at the end of the match he scored himself after Alexander Kerzhakov's submission, which Andrey closed with a rally kick. Zenit won 2-0 and practically guaranteed itself the title of champion of Russia. In the next match against Kuban, Arshavin again managed to score a goal and start another scoring attack of the team, which helped Zenit achieve a draw. Arshavin scored the last goal for the club against Rubin Kazan in the match of the 42nd round. In the same match, Andrey scored an assist. The last match for the club was played in the match of the 44th round against Anzhi Makhachkala, in which Zenit won a landslide victory, and Arshavin himself scored an assist for Alexander Bukharov.

Master of Sports of the USSR
Occupation