Amino acids are biologically important organic compounds that contain amino (-NH2) and carboxyl (-COOH) functional groups, along with a side chain (R group) specific to each amino acid. Amino acids are the building blocks of proteins and also function in cellular metabolism and comminication between cells.

Amino acids are organic compounds that contain amino (-NH2) and carboxyl (-COOH) functional groups, along with a side chain (R group) specific to each amino acid. The elements present in every amino acid are carbon (C), hydrogen (H), oxygen (O), and nitrogen (N); in addition, sulfur (S) is present in the side chains of cysteine and methionine. Selenium is an essential trace element in the amino acid selenocysteine, which is incorporated into 25 human proteins (selenoproteins). Amino acids are used by biological organisms in cellular metabolism and synthesis of protein. Amino acids function as energy metabolites and in communication between cells. More than 500 amino acids have been discovered in nature, but only 22 of them participate in translation, the synthesis of protein from the nucleic acid code in mRNA. Twenty amino acids are used in proteins in all living organisms but selenocysteine and pyrrolysine are not used by all organisms. The human body needs 20 different types of amino acids to function property, 9 of which the body cannot synthesize. These are called essential amino acids, because they must be acquired from food.

Amino acids join together in long chains to form proteins, which are polymers of alpha-amino acids. Proteins assemble via amide bonds known as peptide linkages. Different proteins have different compositions and arrangements of amino acids. 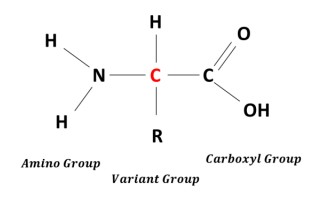 The 20 naturally occurring acids used in protein synthesis are represented by the generic formula above (image from Aouniti, A. et al. (2017). Amino acid compounds as eco-friendly corrosion inhibitor in acidic media-Review). The alpha carbon (α-carbon or Cα) shown in the centre connects the amino group to the acid carboxyl group. The alpha carbon is the point of attachment for the side chains of 19 out of 20 amino acids used to build proteins. Glycine, the only amino acid with no side chain, has a hydrogen atom in the location of the side chain in other amino acids. When incorporated into protein, all of these 20 amino acids are L-isomer, alpha-amino acids with an R-absolute configuration, except glycine (no chiral center) and cysteine, which has an S-absolute configuration due to the sulfur-containing R-group. Selenocysteine and pyrrolysine are considered the twenty-first and twenty-second amino acids. Humans use selenocysteine, but not pyrrolysine. Both of these more recently discovered amino acids are thought to be incorporated into protein during ribosomal protein synthesis, which is different than the other 20.

All of the canonical amino acids, except glycine, exist in two optically active forms, D- and L-, which are called enantiomers, meaning they are mirror images of each other. D- (dextrorotatory) and L- (levorotatory) forms of amino acids have different physiological and biological activities. L-Amino acids are the building blocks of proteins in all kingdoms of life. D-Amino acids have fundamental roles in microbial physiology as key constituents of peptidoglycan, part of the bacterial cell wall. Diverse bacterial species release non-canonical D-amino acids into the environment, and these regulate cellular processes in the producer and other bacteria within the niche.

Histidine participates in synthesizing the neurotransmitter histamine, which functions in the immune system, digestion, sleep, and sexual function.

Leucine assists in the production of growth hormones, muscle growth and repair, wound healing, and energy production as an involvement in calcium and immune function.

Methionine is involved in tissue growth, metabolism, and detoxification as well as absorption of essential minerals such as zinc and selenium.

Threonine has a role in collagen and elastin production needed for skin and connective tissue, blood clot formation, fat metabolism, and immune function.

Tryptophan is involved in nitrogen balance in the body and in the production of the neurotransmitter serotonin.

Valine is involved in muscle growth, tissue regeneration, and the production of energy.