Amber is a type of bright, golden fossil resin. Hardly ever worked by jewelers. In ancient times, Aristotle, followed by Theophrastus and Pliny the Elder, supposed that the formation of this stone was connected with the resin of pine trees.

In the 18th century, the Swedish naturalist Carl Linnaeus and the Russian scientist Mikhail Lomonosov proved scientifically that amber really does come from the resin of ancient conifers.

The scientific description, origin and classification of amber (white amber, yellow amber) was given in 1807 by academician Vasily Severgin in his book "A Detailed Dictionary of Mineralogy". 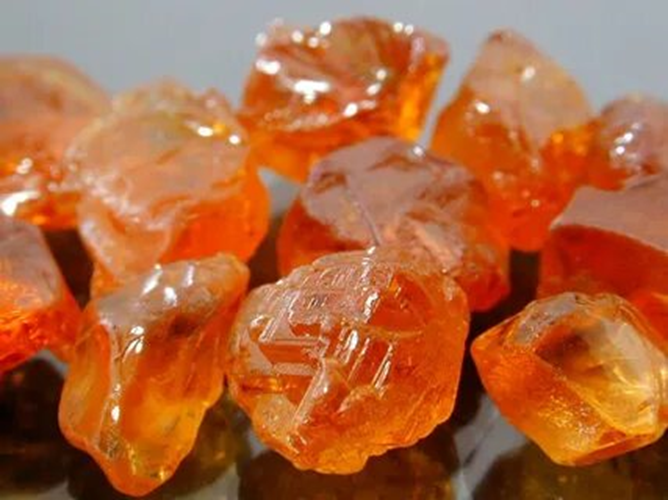 The original act in the formation of amber was the abundant release of resin from coniferous trees. The reasons for it are varied. Pine tree

The original act in the formation of amber was the abundant release of resin from coniferous trees. The reasons for it are varied. Pine trees were also sensitive to external influences. During thunderstorms, hurricanes and the like, they secreted resin-vivarium, which had a protective function: quickly solidified, the resin dried on the affected area, protecting the tree from infection through the wound. The bulk of the resin flowed from trees that were broken during spring storms. Equally abundant resin flowed when various forest pests gnawed, pierced and chiseled the bark. The trees were forced to heal their wounds. The thick, sticky resin formed nodules, clots, bunches, and drops on the trees, which, unable to bear their own weight, fell to the ground. Sometimes the process of tarring was interrupted and resumed after some time, which contributed to the formation of multilayered resin secretions. Insects would land on the resin and stick to it. Unable to free themselves from the sticky mass, they remained in it forever.

At the second stage, the resin was buried in the forest soils. It was accompanied by a number of physical and chemical transformations of the resin, the nature of which largely depended on the conditions in which this resin got. In dry, well-aerated soil, the resin was transformed with the participation of oxygen. The stability of the resin increased, and its hardness increased. In waterlogged areas, in an anaerobic environment, the resin retained its brittleness. 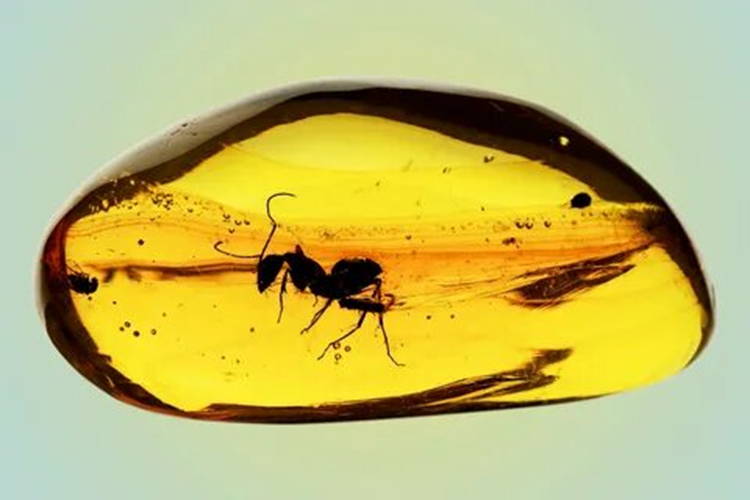 The third stage in amber formation was marked by erosion, transfer and deposition of fossil tar in the water basin. The conditions favorable for the emergence and accumulation of amber are associated with the geochemical and hydrodynamic specificity of the basin.

Transformation of resin into amber occurs with the participation of oxygen-containing, potassium-rich alkaline silt waters, which, when interacting with resin, facilitate emergence of amber acid and its esters. At the final stages of this process, not only amber is formed, but also glauconite, a mineral that constantly accompanies amber accumulations; in other words, the transformation of fossil tar into amber and formation of glauconite occur in one oxidation-reduction environment. The finding of glauconite is evidence of a weakly alkaline and weakly reducing environment. The absence of this mineral in the rock is additional evidence of intense aeration of sediments.

The French name for amber (ambre) was borrowed from Arabic. The Arabs thought of the stone as hardened dew that fell from the sky. After transformation into amber, the word entered many modern Romance and Germanic languages.

In Germany, amber was given the German name amber. Bernstein, from the German. Brennenstein (inflammable stone): it is easily ignited and burns with a beautiful flame, while emitting a fragrance.

The Greeks called amber after the star Elektra in the Pleiades family of the Taurus constellation. The ancient Greeks were particularly interested in amber because of its ability to electrify. In fact, the Greek word for amber is the origin of the word electricity.

In Ukraine, it was called Ukr. "gory stone" or Ukr. "burshtin".

Birefringence, dispersion, pleochroism are absent. Absorption spectrum cannot be interpreted. Luminescence is bluish-white to yellow-green, at bermite - blue. It is flammable, it catches fire from a match flame. It is electrified with friction. The stone can be polished very well. In the open air it oxidizes (grows old), which with the lapse of time will change its chemical composition, color, shade, and vitality.

Amber is also characterized by the degree of transparency connected with different concentration of microscopic hollows in its body. According to this characteristic, amber may be called:

"transparent" - without voids, of the highest quality, 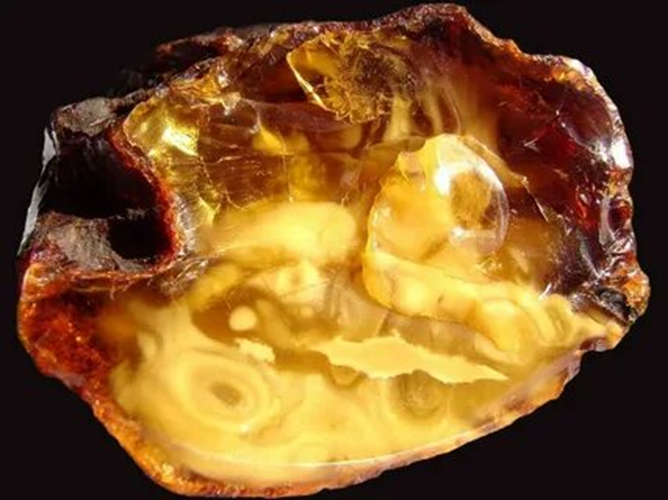 There are as many shades of amber as there are colors in the spectrum. The reason for such diversity is usually the presence in the body of amber of substances and minerals extraneous to the resin. For example, sulfuric pyrite or algae give amber a greenish hue. Some minerals can even make amber have a peculiar silvery hue.

"foamy" - opaque, resembling sea foam in appearance, with a variety of cavities from the smallest to very large, several millimeters.

Amber has been used since ancient times for making all kinds of jewelry, souvenirs and household items. Not only was it used for wearable jewelry, but also for practical objects, such as cigarette cases, ashtrays, boxes, chests, and even clocks.

The famous Amber Room occupies a special place in art. 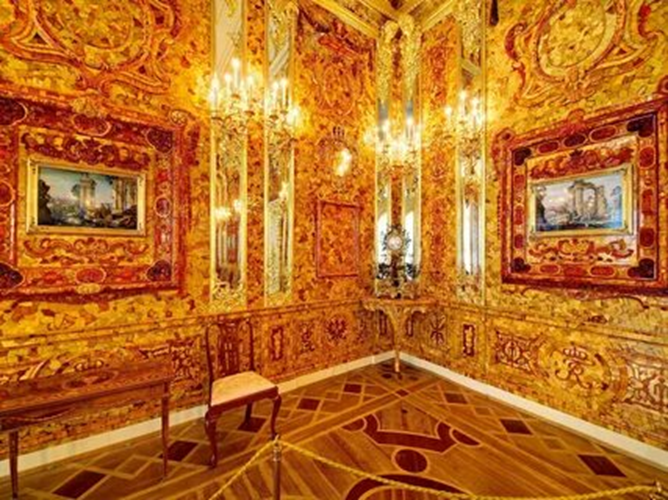 Small grains, jewelry waste, and contaminated amber are valuable chemical raw materials for the production of amber acids, oil, and rosin, which are used in the perfume, pharmaceutical, and paint-and-varnish industries.

The sea emits especially much stone during storms. The most productive ones are called amber storms:

- In 1800 on the Polish coast of the Baltic Sea during one stormy day 150 barrels of amber came ashore.

- In the fall of 1862, about two tons of amber were collected on the shore after a night storm.

- On the night of December 22-23, 1878, during a storm near Palmniken, the waves brought such a mass of amber ashore that the locals collected it for several years.

According to a rough estimate, every year the waves of the sea wash from the bottom and extract 36-38 tons of amber to the shore. Over three millennia, 125 thousand tons of amber have been collected on the shores of the Baltic Sea. Sizes of pieces varied - from fractions of a gram to several kilos.

In Poland, the collection of amber, thrown on the shore and fished out at sea, is up to 4 tons every year. The biggest amount of amber is washed ashore near the Vistula Spit. Amber landed is sometimes called maritime amber.

Secrets of amber. How is amber extracted and found?