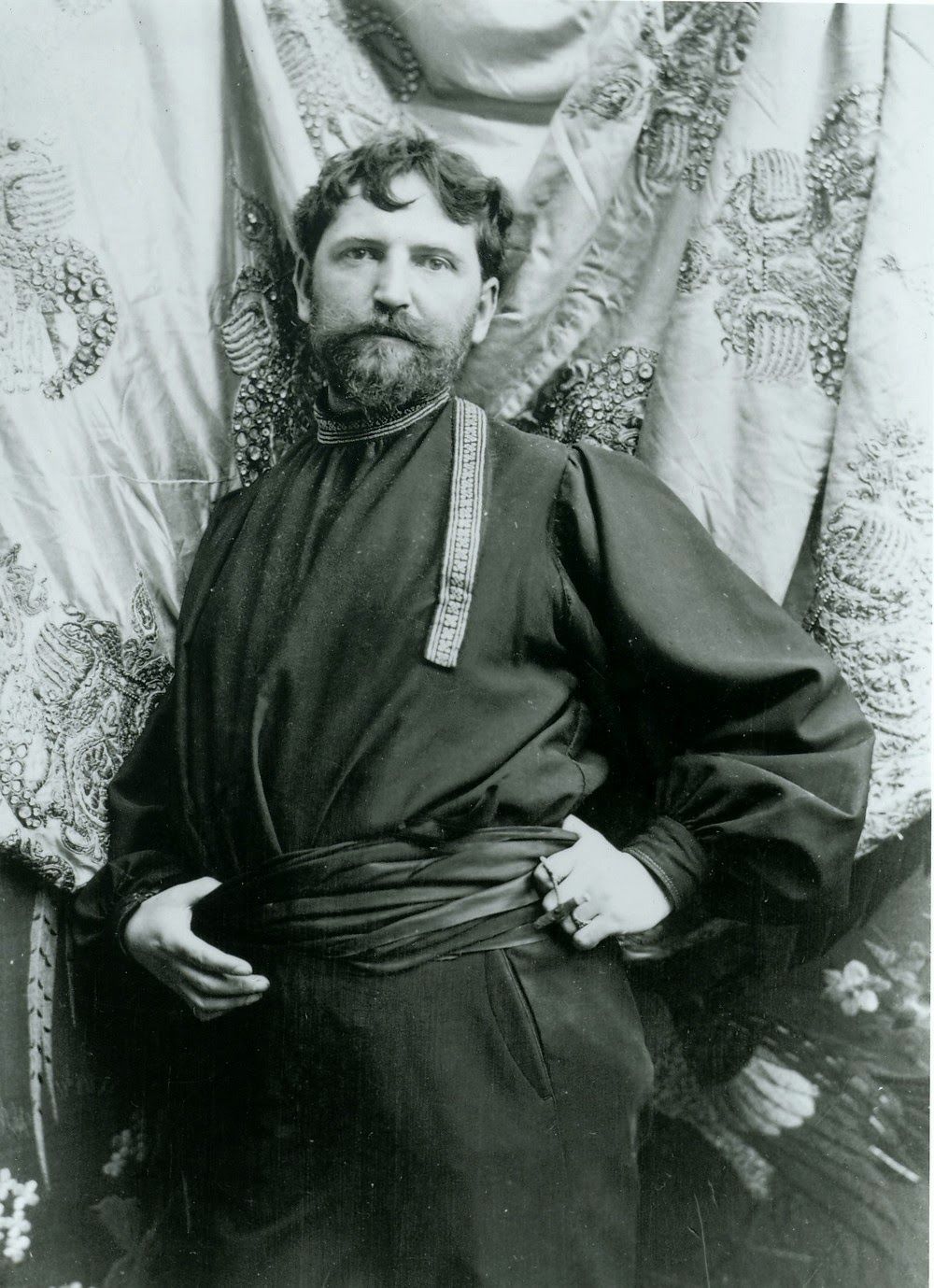 Alphonse Mucha is one of the most famous Czech painters and representatives of the Art Nouveau style.

To make ends meet, A. Mukha worked part-time creating posters. That's what led him to fame. On the eve of Christmas, he received the usual order from the Renaissance Theater for a poster for the performance of "Gismond". This work made him almost the most popular artist in Paris. Sarah Bernhardt, one of the actresses of that performance, immediately wished to meet the artist personally, and later promoted his career (he became the main decorator of the theater). During the following years, he painted many posters for the most famous performances: "Hamlet", "The Lady with Camellias", "Medea", etc.

This poster is called one of the best works of the artist. It embodies all the characteristic features of his style: elegance, compositional precision, a clear profile contour, wavy folds of clothing. The inscription seems to repeat the curves of the clothes and emphasizes the background of the poster. The color scheme creates a sense of mysterious romanticism, the upcoming drama in the fates of the characters.

Reviews about this poster were not the best. Critics suggest that such an exhaustion of the artist's imagination could arise from monotony. There is also an assumption that this was influenced by a change in the writing process. A. Mukha was forced to switch from full-scale sketches to repeating photographs taken with scenes from the play. S. Bernard was, of course, a great actress, but in all the photos her poses were played, so the hero of the poster stands in a rather strange pose. Nevertheless, his image remains classic, and hints of the events of the production are depicted in the background.

This is another of the great works of the artist. She is distinguished by a completely new mood: the heroine's face depicts a tragic fright, a nightmare. A. The fly catches and portrays Medea at the most intense moment of the performance, when the heroine kills her own children out of jealousy. The heroine's pose is so tense that her condition is also transmitted to the viewer: an elongated neck, tightly clenched hands, and especially the right hand with a dagger, horror in her eyes. At the same time, she is dressed in dark tones, reminiscent of muddy water or the sea during a storm, in which her dead children seem to lie. By the way, S. Bernard liked the unusual bracelet of the heroine so much that she asked the artist to make a sketch and ordered jewelry from one of the best masters in Paris. It was then that a new stage of A. Mucha's career as a jewelry designer began with the collaboration with the famous jeweler George Fouquet. 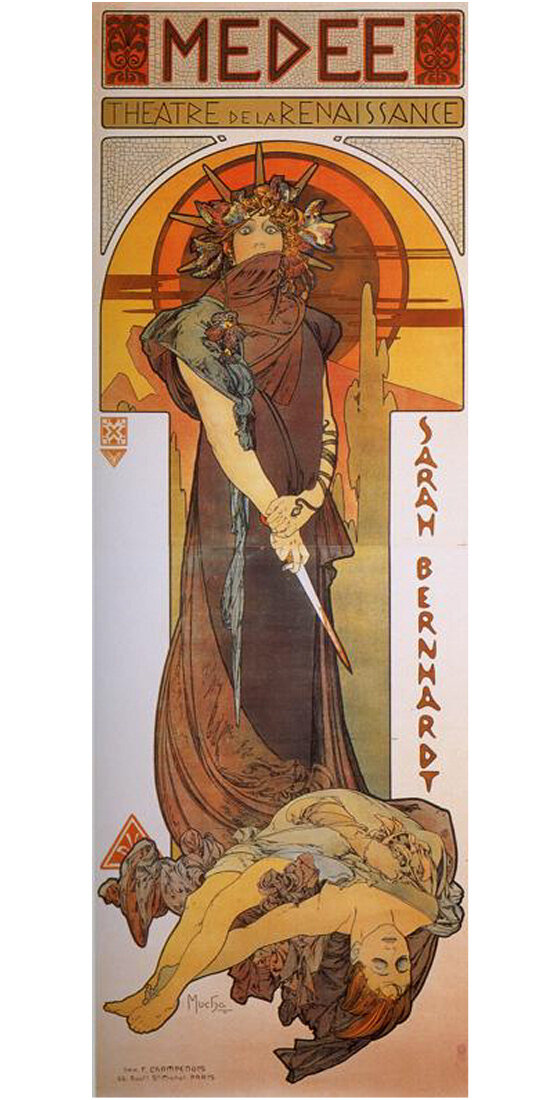 Bracelet in the form of a snake

This bracelet has become one of S. Bernard's favorite jewelry. He fit perfectly into the images of the femme fatales of that time. The snake was wrapped around the arm, and from its head there were chains to rings. Various precious stones were used in the bracelet: rubies, diamonds and opals. 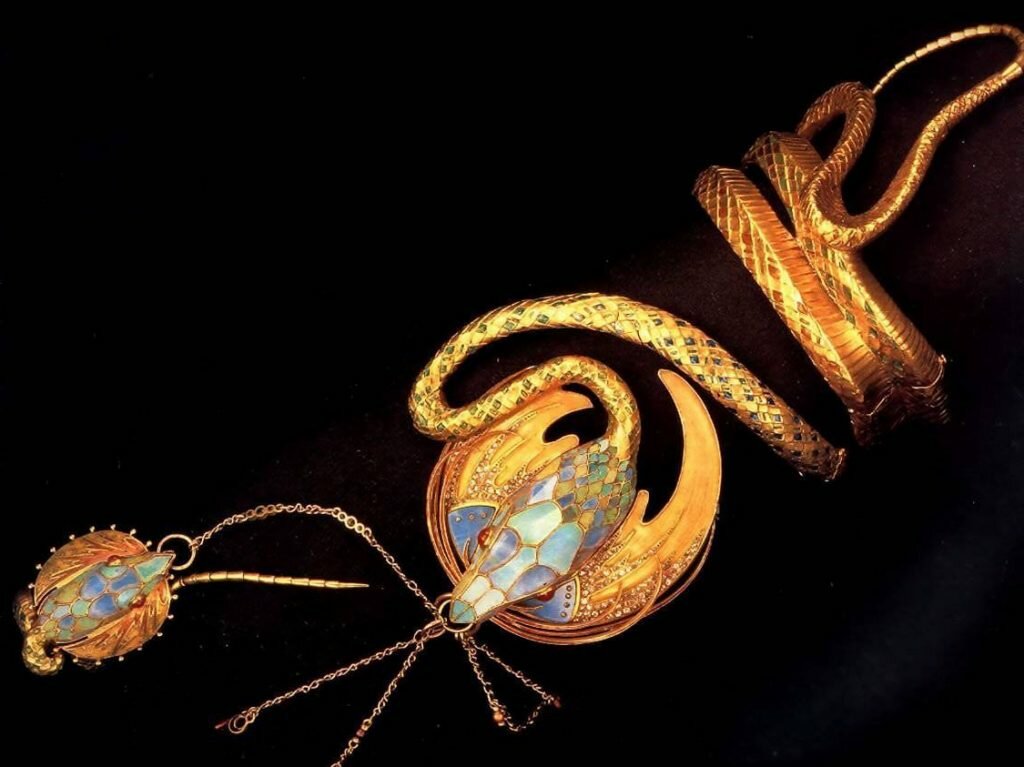 Bracelet in the form of a snake

Decorations for the "Princess of Dreams" 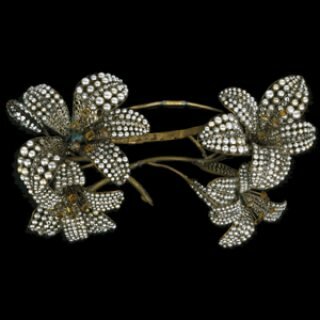 When S. Bernard played Melisinda from the play "The Princess of Dreams", she again asked the artist to help. According to his sketch, a beautiful tiara with lilies and a pendant were created.It would seem that at the peak of his fame, A. Mukha created colorful graphic series, including the famous "Seasons".

This painting was created using flat printing: a complex technique consisting of several stages. "Summer" stands out from the whole series with its "juiciness", that is, the brightness of the color palette. The depicted girl is clearly languishing from the heat: a light dress falls off her shoulders, she leans on a plant resembling wild grapes, and looks tired, as evidenced by her posture; hanging her legs in the water, the girl tries to cool off. It is impossible not to pay attention to the wreath of poppies on her head. In combination with the languid and slightly playful expression of the girl's face, these flowers, known for their dope, give a hazy mood to the whole picture. The color scheme used to paint the girl and the landscape background contrasts interestingly: the blue sky with sunset clouds attracts the viewer's attention to the face of the girl depicted in warm pastel colors. She looks like a young, capricious and audacious seductress.

This painting depicts a girl with red hair, honey-colored, slightly tanned skin tone and bright red lips, which emphasizes the main colors of the season itself. A very light, airy pale blue dress seems to remind us of the upcoming fogs and rains, but gold inserts add bright leaves to the sad autumn landscape familiar to us. Already withering leaves are depicted around the girl. In her left hand she holds a saucer, and with her right she collects berries, which symbolizes the time of harvest. At the same time, she looks calm and joyful, as if reminding about the upcoming holidays. 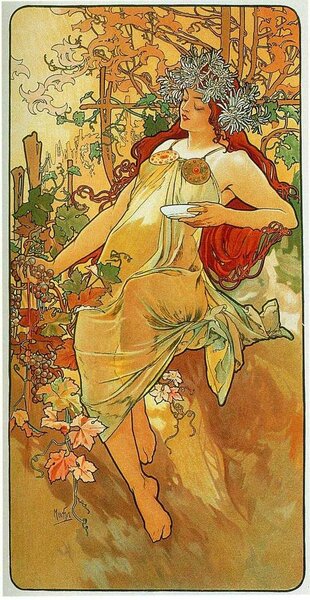 "Winter" embodies all human feelings during these cold months. The painting depicts a cowering girl. It's like she's trying to keep warm, but she can't do it. Despite the warm shades, reminiscent of the color of the setting sun, of the background, the viewer feels cold from the picture itself: a girl sitting on a branch of a snow-covered tree, as if trying to warm up, but neither the thin blanket in which she is wrapped, nor the dried leaves that she presses to her face, do not help. 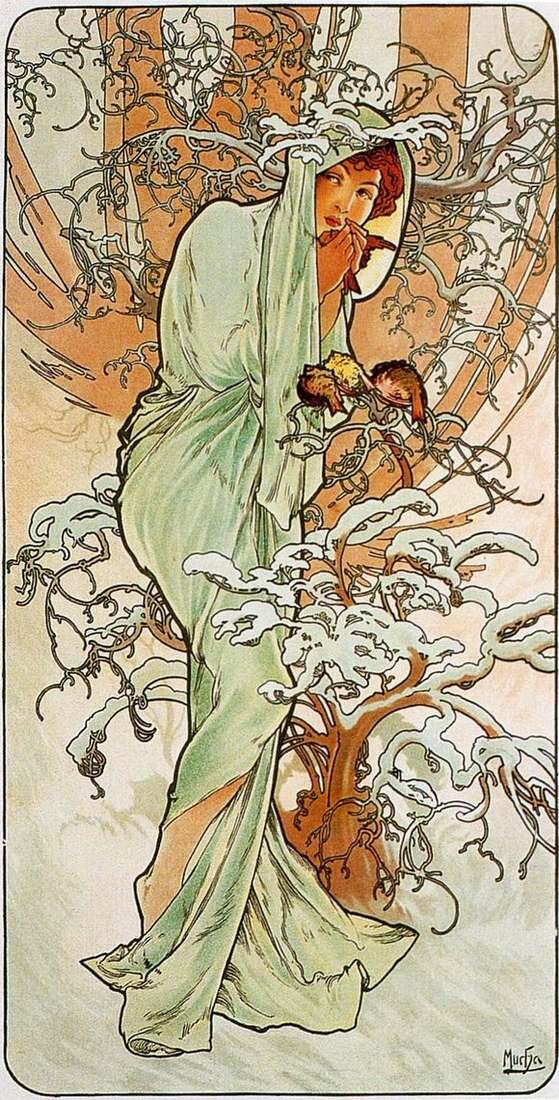 The lithograph "Spring" depicts a girl with long blonde hair playing a lyre from a green branch. Her light light dress, bare feet, a wreath of flowers on her head and flowing hair resembling the sun's rays personify the warmth that has come. The background consists of a warm green color of different shades, so reminiscent of grass. The birds that have returned from the south are sitting on the lyre and seem not to be afraid of the girl at all. Unlike "Summer", she does not flirt with the viewer, she reads only the calmness and triumph of life. 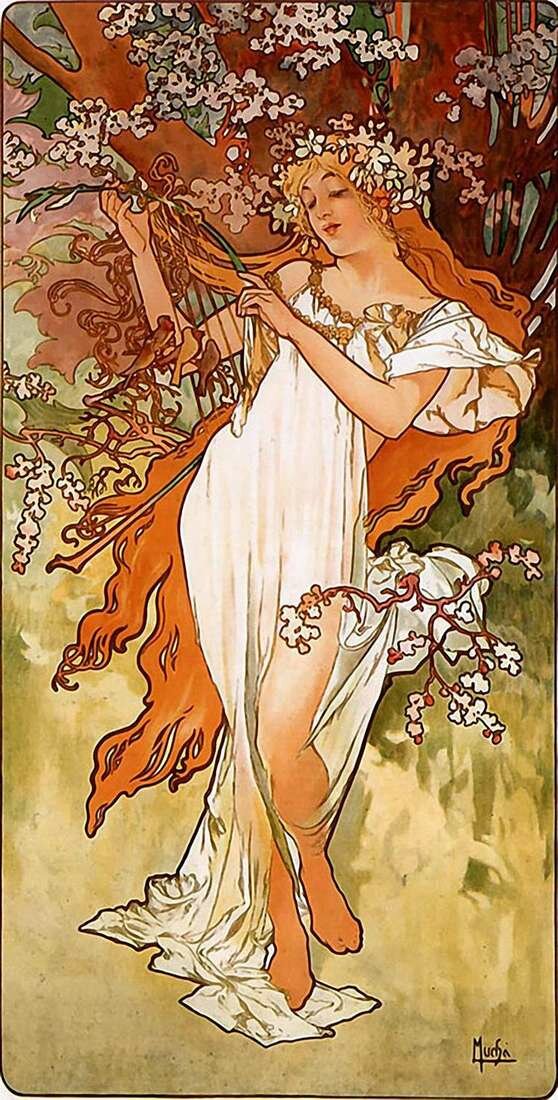 Alphonse Mucha was born in Ivančice.

Title
Date
Link
muchafoundation.org
Is a