An area of machine learning focusing on how machines and software agents react in a specific context to maximize performance and achieve reward known as reinforcement signal.

Reinforcement learning is an area of machine learning concerned with how software agents ought to take actions in an environment so as to maximize some notion of cumulative reward. It allows machines and software agents to automatically determine the ideal behavior within a specific context, in order to maximize its performance. Simple reward feedback is required for the agent to learn its behavior; this is known as the reinforcement signal.

The simplest context in which to think about reinforcement learning is in games with a clear objective and a point system. 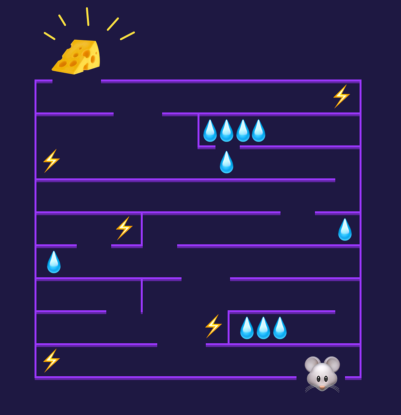 For example, a game where a mouse is looking for the cheese at the end of the maze (+500 points), or the lesser reward of water along the way (+10 points). Meanwhile, mouse tries to avoid electric shock (-100 points).

The reward is not always immediate. Here, the robot-mouse will go to a long stretch of the maze. It has to walk through the paths and face several decision points before reaching the cheese.

With the advance of neural networks, deep reinforcement learning, a strategy that uses neural networks to evaluate the states (e.g. Q-values), becomes more popular. It allows researchers and engineers to create agents that does well in more complex enviroments.

Due to its generality, it is studied in many other disciplines, such as game theory, control theory, operations research, information theory, simulation-based optimization, multi-agent systems, swarm intelligence, statistics and genetic algorithms. In the operations research and control literature.