We make it easy for you to earn cryptocurrency for your time and data while engaging with the web as you normally do.

Over the past decade, the Internet has become unfair. Today's digital economy, dominated by big technology data monopolies, is driven by aggressive competition to collect profile data to sell to third parties for targeted advertising. The tactics that fueled Web 2.0—the surveillance, exploitation, and monetization of personal data—are now deeply ingrained, and the centralization and cross-party use of data without meaningful human consent is firmly rooted in the business model of the Internet.

Permission.io was created to end the destructive, exploitative economy that created Web 2.0 and give people back ownership of their time and information. With the creation of the Permission Coin (ticker ASK), Permission has developed a unit of exchange that allows people's time and data to be properly valued and allowed within a transparent market system. In doing so, the company is building a fully decentralized permissive economy that allows people around the world to own, control and profit from their participation.

Permission allows advertisers to offer value in sharing data and interacting with consumers. Permission allows people to grant advertisers and other market participants permission to access their peer-to-peer data. Consumers are encouraged and compensated for participating in ASK, while advertisers benefit from "own" data obtained as a result of obtaining permission to participate. This proprietary data is the backbone of the permissions economy and allows advertisers to build trust, achieve 1:1 interactions, and increase ROI. By returning value to the individual consumer, away from centralization and data consumption by big technologies, Permission brings the necessary changes to the current business model of the Internet.

Fundamental to the mission of Permission.io and creating value for all stakeholders is its ability to provide permissioned visibility to the entire dataset of an individual. Currently, personal data is stored in vaults and applications, suppressing e-commerce ads and reinforcing the dominance of big technology. The native Permission query engine ("PermissionQE"), based on proprietary technology using data algebra, provides a mechanism for ensuring that individual data can be shared and used securely. By applying innovations in data algebra, advertisers can now obtain permissioned access to data across different databases, including third-party sources, ensuring data interoperability. People achieve true data sovereignty and the ability to “allow” and be compensated for their data throughout the digital ecosystem.

The rise of decentralized applications and distributed ledger technologies points to a new web economy that respects and allows the monetization of people's time and data. As these new technologies mature and become scalable, the Web 2.0 Internet leadership economy will be replaced by an open, transparent, and distributed permissions economy. ASK, made possible worldwide by permission-based applications activated over the Internet, will be the currency that supports this economy and will be the backbone of its growth. To realize this ambitious vision, developers are creating applications and incentives that encourage mathematicians, technologists, developers, businesses, and consumers to create, contribute, and expand the permissions ecosystem. Developers envision many vertical use cases (e.g., e-commerce, entertainment, gaming, travel). , health and insurance, recruitment, market research, etc.) that are built on permission standards and supported by ASK.

Permission.io is the core experience and entry to the platform. Individuals register to become a member and receive a wallet to be used on Permission.io and other third party applications. Members agree to register their interests, demographics and other key data. For the continued sharing of data and for granting permission to receive invited ads aimed at their curiosity, desire to learn and buy, members are awarded ASK. Members are also rewarded for integrating personal data that already exists on Facebook, Instagram, LinkedIn, Google, and eventually any other site that stores their personal data. Members can HODL, exchange or spend ASK on the platform and/or other third party sites that accept ASK.

A key aspect of interaction with members is viewing ads. Members earn by participating in ads of various lengths and formats, including shorter, gamified, rewarded or subscription-based value exchange ads and/or movies ranging in length from a couple of minutes to a couple of hours. Users will be able to directly monetize their data collected while interacting with content, unlike regular platforms that sell their information to third parties. Over time, the platform will offer other opportunities for members to earn from their data by interacting with news, polls, video games, premium content, and more.

At the time of this writing, the Permission ecosystem is capable of compensating consumers for association with advertisers from the world's top brands. Currently, its community consists of people in 156 countries. The platform successfully exited beta testing in August 2020 and has over 350,000 registered ASK wallets. While the core elements of the platform have been developed by a core group of engineers, the developers expect significant future development to come from the growing open source community.

The total supply of ASK tokens is 100 billion. Of this total, 40% of tokens are allocated to users, 25% to Buyers and Backers, 20% to developer incentives and advisors, and 15% to the team. The big offer is intended for mass adoption by users around the world. 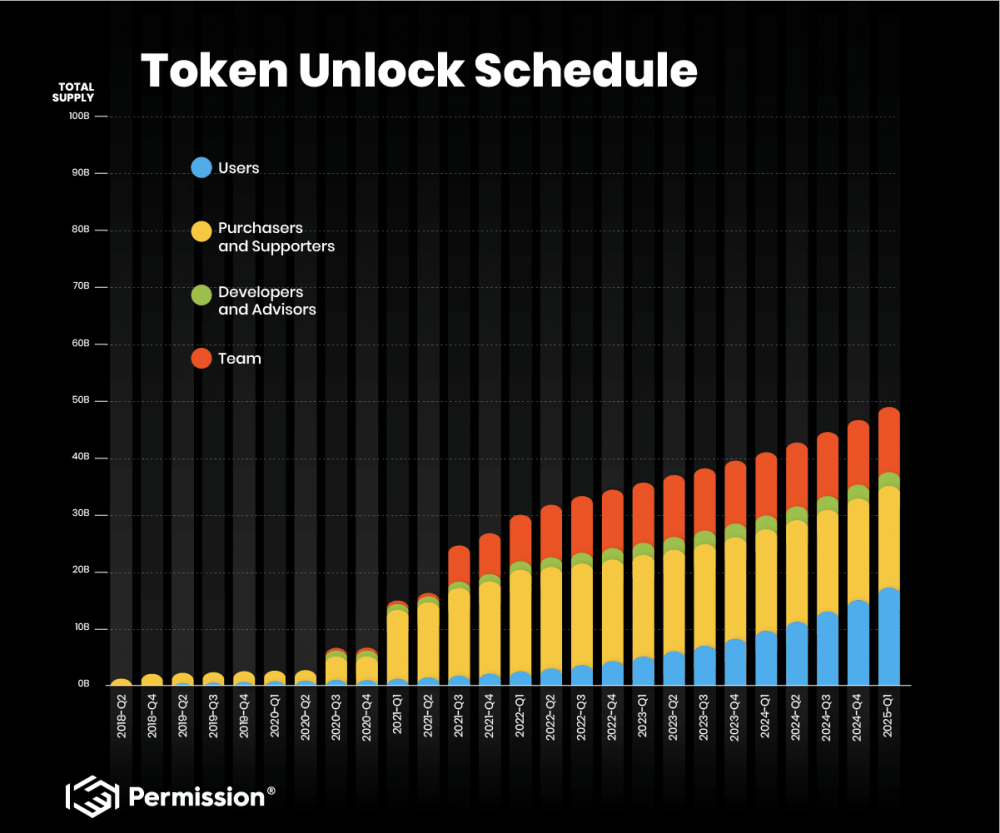 Here is some additional information about the circulating supply:

Two billion tokens allocated to Series B-1 investors and team. Even though these tokens have been unlocked, some of the investors are showing their long-term support for the permit by agreeing to keep these tokens off the market for additional years.

All current members of the team are on a four-year schedule for vesting their ASK. Initial team members, such as seed token holders such as founder and CEO Charlie Silver, are fully vested with tokens, but are subject to a one-year lockup from the main listing date, which began on the exchange’s first listing date. In addition, all team members are subject to a restriction on the sale of their tokens; that is, they cannot sell more than 25% of their tokens in any three-month period.

Nearly all employees, board members, consultants, and most buyers and supporters are subject to the same annual cap from the date of the main listing.

What is a permission coin? [ASK]

"ASK" is a permission currency and in order to use it, it is necessary to provide a global digital advertising system based on valid data and voluntary participation.

The project primarily aims to provide a solution to some of Web 2's most serious problems, such as data snooping, data exploitation, and interruptive marketing, by enabling users to securely grant permissions and monetize their data online. , as well as an opportunity for an enterprise solution for marketers looking for a better return on advertising spend.

Get Started Building with Permission