Respiratory source control refers to the use of masks to protect others by covering the mouth and nose to reduce the spread of large respiratory droplets to others.

Most randomised controlled trials of face coverings have taken place in healthcare environments where their efficacy was addressed with respect to protecting the wearer from infection and not as a source control measure. While medical-grade masks that protect the wearer must meet stringent filtration standards to block tiny aerosolised particles, source control face coverings have potential to be effective at reducing transmission even if they only block larger droplet particles. 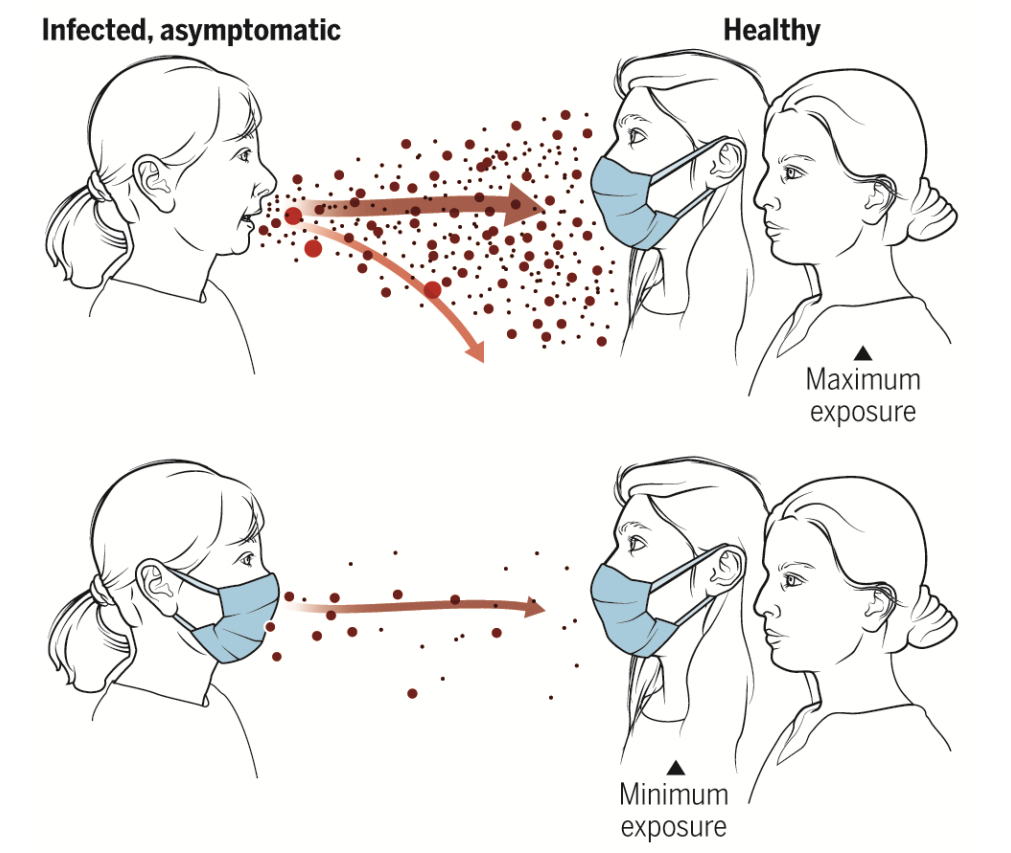 The above illustration shows how a mask worn as source control will act as a barrier to reduce the amount of virus-laden droplets released outward from an infected individual. 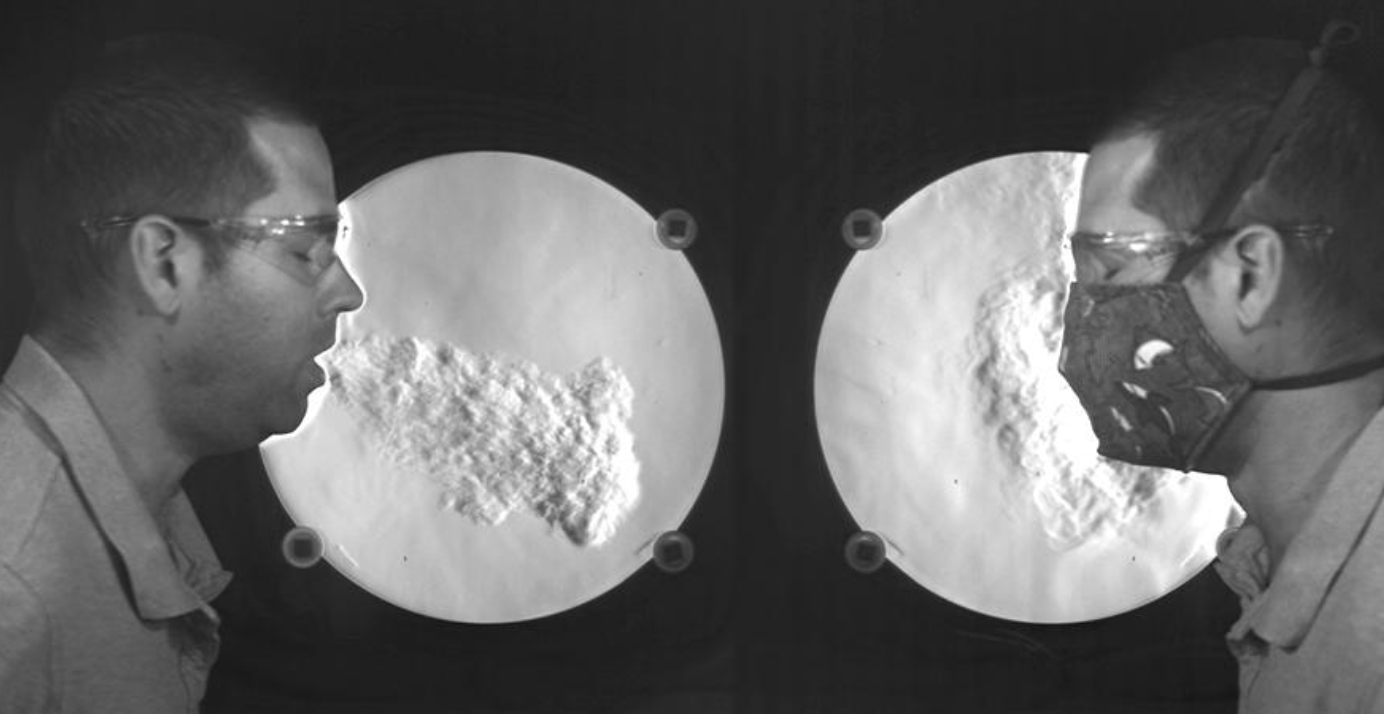 The above is a photo from a high-speed visualization that illustrates airflow when coughing. It shows that the cough stays closer to the face when a person wears a face covering. The illustration does not show the movement of virus particles but is a technique that shows the differences in airflow between not wearing a mask and wearing a mask. Mathew E. Staymates, a NIST researcher used his technique to visualize airflow for a variety of face coverings worn by people during coughing. The group observed that wearing many types of face covering reduced airflow velocity when people were talking. See section "Reducing distance air travels from mouth".

In vitro evaluation of masks

The following are experimental evaluations of masks as respiratory source control done using equipment and materials to mimic a person breathing through a mask. Further details about protocols and procedures are found on the mask testing protocols page.

To simulate an infected patient (source) and a receiver which may represent a healthcare worker, ventilation was fed through mannequin heads and exposure of the source to radioactive aerosols was measured under different scenarios. Masks placed on the receiver provided minimal exposure protection except when sealed with Vaseline. Any mask applied to the source mannequin significantly reduced exposure to the receiver and was more effective than a Vaseline-sealed N96 respirator worn by the receiver.

Researchers at the Department of Ocean and Mechanical Engineering at Florida Atlantic University examined the blocking of emulated coughs and sneezes by different mask materials and designs using qualitative visualizations of vapors creating by a fog machine. The research showed that loosely folded face masks and bandana-style covering provided minimal blockage and well-fitted homemade mask with multiple layers of quilting fabric and off-the-shelf cone style masks were most effective at reducing droplet dispersal.

Researchers from Duke University measured droplet transmission through masks of different materials when a speaker wearing the mask speaks into the direction of a laser beam. The group intended to describe their mask testing methods and did not complete a comprehensive survey of all possible mask designs. However the researchers noted that some masks such as the neck gaiter dispersed large droplets into smaller droplets, which may be counterproductive as these smaller particles could more easily be airborne. For N95 masks, the valve which opens for strong outward airflow, does not compromise the protection of the wearer but does decrease protection for those surrounding the wearer. In their study, the non-valved N95 mask was far superior for respiratory source control. A fitted N95 mask showed 0.1% droplet transmission versus 110% (above 100% due to large droplets dispersed into smaller ones).

NIST researchers produced a video comprised of high-speed visualizations that illustrate airflow when breathing and coughing using homemade face coverings. The research team found that most face covering stopped much of the cough from landing on someone else and that a good seal around the nose, chin and cheeks prevents leaking. They were able to visualize that a surprising amount of air comes out of the nose during a cough, indicating that covering the nose if important.

Mathematical modelling research from Hong Kong Baptist University suggested that if face coverings that were 60% effective at blocking viral transmission were worn by 60% of the population the transmission rate R0 would be reduced to below 1.0.

A small randomized clinical study was conducted in France to investigate the effectiveness of surgical masks for reducing spread of influenza A in the household. The index case of each household who tested positive for influenza A was randomised to wear or not wear a mask. The study tested the association between the intervention (mask wearing) and the proportion of household contacts that developed an influenza-like illness. The study did not find a trend suggesting the effectiveness of face masks but the authors stated that there was a lack of statistical power.

A study on household interventions to prevent upper respiratory tract infections was conducted by researchers at Columbia University, New York, found that mask wearing was associated with reduced secondary transmission.

Researchers at The Beijing Centre for Disease Prevention and Control conducted a cluster randomised controlled trial where the index patient with influenza-like illness either did or did not wear a mask for a period and the transmission of the illness to household members was assessed. A potential benefit to medical masks for source control was indicated but did not reach statistical significance. The authors stated that larger trials were needed to confirm efficacy of medical masks as source control.

Researchers at the University of Hong Kong concluded that community-wide mask wearing may contribute to the control of COVID-19. Over the period from December 31, 2019 to April 8, 2020, the compliance of face mask usage was 96.6% in HKSAR and incidence of COVID-19 in HKSAR was significantly lower than that in other countries such as Spain and the U.S. where compliance for face masks was low.

Notable examples where mask-wearers did not transmit COVID-19

The lack of transmission of COVID-19 was reported on a flight with 350 passengers when one person was symptomatic and later diagnosed with COVID-19 during a 15-hour flight from Guangzhou to Toronto. It was suggested that transmission was mitigated by mild symptoms and masking during the flight.

In a hair salon in Springfield, Missouri, it was reported that 139 clients were exposed to two hair stylists with confirmed COVID-19 while both the stylist and client wore masks and there were no symptomatic secondary cases reported. 67 of the exposed clients were tested for SARS-CoV-2 and tested negative.

COVID-19: WHY WE SHOULD ALL WEAR MASKS -- THERE IS NEW SCIENTIFIC RATIONALE