Pipilotti Rist is an artist, cinematographer, and screenwriter, based in California and Switzerland.

Pipilotti Rist is a contemporary artist, best known for her experimental video and installation art. Her creations have been described as surreal, intimate, abstract, and often categorized as feminist art. She often performs in her own video productions, and much of her art features self portraits of some kind.

Installation view of Pipilotti Rist: Big Heartedness, Be My Neighbor, September 12, 2021–June 6, 2022 at The Geffen Contemporary at MOCA.

More recent exhibits include New Museum (2016), New York; Museum of Fine Arts (2017), Houston; and Louisiana Museum of Art, Humlebæk, Denmark (2019). Her current exhibition Big Heartedness, Be My Neighbor is at The Geffen Contemporary at MOCA, in Las Angeles. (September 2021 - June 2022) 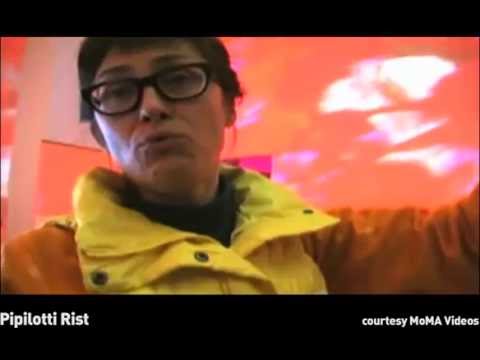 The following are some of her video installation pieces:

Pipilotti Rist was born on June 21, 1962 in Garbs, Switzerland. Her name was originally Elisabeth Charlotte Rist; her self-given name is inspired by her nickname and the storybook character Pippi Longstocking. She studied art at the University of Applied Arts in Vienna from 1982 to 1986 and the Basel School of Design from 1986 to 1988. During her studies, she began focusing on video and installation art, though she also experimented with animated cartoons and scenery for pop music concerts. She produced her first video, I’m Not the Girl Who Misses Much, in 1986.In addition to visual art, Pipilotti Rist is also a musician, playing both bass and drums in Les Reines Prochaines, or The Next Queens, from 1988 to 1994.In 1997, she was the recipient of a Premio 2000 award for the video Ever Is Over All (1997), which features a woman smashing car windows with a larger flower. Rist was a visiting professor at UCLA, Los Angeles CA, 2002 – 2003.

Pepperminta, Rist's first feature film is premiered at the Venice Film Festival.
Rist is awarded a Premio 2000 for the video Ever Is Over All (1997)
Pipilotti Rist produces her first video, I’m Not the Girl Who Misses Much.

The video features Rist bouncing up and down as she falls out of her dress, while repeatedly singing the title line which she derived from the lyrics to a Beatles song.

Pipilotti Rist was born in Switzerland.