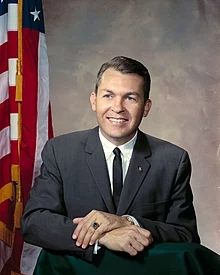 See received an appointment to the United States Merchant Marine Academy in 1945. He graduated in 1949 with a Bachelor of Science degree in marine engineering and a United States Navy Reserve commission, and joined the Aircraft Gas Turbine Division of General Electric as an engineer. He was called to active duty as a naval aviator during the Korean War, and flew Grumman F9F Panther fighters with Fighter Squadron 144 (VF-144) from the aircraft carrier USS Randolph in the Mediterranean, and USS Boxer in the Western Pacific. He married Marilyn Denahy in 1954, and they had three children.

See rejoined General Electric (GE) in 1956 as a flight test engineer after his tour of duty, and became a group leader and experimental test pilot at Edwards Air Force Base, where he flew the latest jet aircraft with GE engines. He also obtained a Master of Science degree in aeronautical engineering from UCLA.

Selected in NASA's second group of astronauts in 1962, See was the prime command pilot for what would have been his first space flight, Gemini 9. He was killed along with Charles Bassett, his Gemini 9 crewmate, in a NASA jet crash at the St. Louis McDonnell Aircraft plant, where they were to undergo two weeks of space rendezvous simulator training.

Elliot See was born in Dallas.

Clipping from The Philadelphia Inquirer - Newspapers.com

Search on Google
Search on Bing
en.wikipedia.org/wiki/Elliot_See
Is a

University of Texas at Austin