BlueConduit is a company that developed an artificial intelligence (AI) and machine learning (ML)-powered predictive modeling and analysis tool to find lead pipes that are contaminating freshwater supplies. The company was launched after the ML algorithms for the product were developed by Eric Schwartz and Jake Abernethy to address the Flint Water Crisis in June 2019. The model predicts lead pipes' location through various data points, including ages of homes, neighborhood location, the proximity of other houses where lead pipes were found, utility records, and more.

BlueConduit was founded in 2016 by Eric Schwartz and Jake Abernethy, former University of Michigan researchers. The company launched as a for-profit social venture leveraging data science and machine learning to find and implement the removal of lead piping used for potable water supplies. As of January 2021, Jake Abernethy reported that BlueConduit had developed relationships with various organizations responsible for overseeing the replacement lead pipes in over 50 cities. 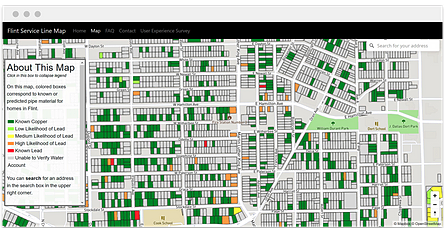 In 2016, BlueConduit joined the efforts to solve Flint's water crisis caused by issues related to lead pipes bleeding toxins into the city's water supply. On June 25, 2020, BlueConduit released the Flint Service Line Map that allowed users to see the probability that a residence is connected to a lead service line and view the progress updates for pipe replacement. Although the results of BlueConduit's use in Flint were promising, Flint's politics were complicated, and BlueConduit's contract was terminated in the city, and a Los Angeles company called AECOM took over. Flint's shift to working with AECOM over BlueConduit caused the success rate in locating lead pipes to decline from 70% accuracy to 15%, resulting in a rising frustration and distrust in government authority from Flint residents. The city has since resumed BlueConduit's map model for locating the lead pipes for replacement. By the end of 2020, nearly 10,000 pipes had been replaced.

According to a 2016 report, the city of Toledo, OH, reported elevated lead levels in as many as 19,000 children, which prompted the city to reach out to BlueConduit to locate and replace the estimated 30,000 lead pipes in use throughout the city. Toledo officials committed to a 30-year plan after local non-profits and activists received a $200,000 grant to locate and remove the lines with BlueConduit's technology.