Who is Ruby Rose?

Ruby Rose is an Australian model, television host, actor, DJ, recording artist, and amateur boxer. She worked as a VJ on ‘MTV’ Australia, a role which brought her recognition in the entertainment industry. She started her career as a model, featuring on prestigious magazines and representing renowned fashion brands, such as ‘Maybelline’ and ‘Nike.’ She became a television host for ‘MTV’ as the job allowed her to be herself, in contrast to her previous work as a model. She later appeared as a guest on many television shows, and was cast to play the role of ‘Stella Carlin’ in ‘Orange Is the New Black.’ She showed her acting prowess while playing ‘Stella Carlin,’ and subsequently, landed important roles in blockbuster movies, such as 'Resident Evil: The Final Chapter,' 'xXx: Return of Xander Cage,' and 'John Wick: Chapter 2.' Apart from her modeling, hosting, and acting roles, she also established herself in the field of music with the release of her single 'Guilty Pleasure.' She later wrote and directed the single 'On Your Side' by ‘The Veronicas.’ Ruby Rose, who is also known for her charity work, posed for a photoshoot as part of PETA’s ‘I'd Rather Go Naked Than Wear Fur’ campaign, showcasing her love for animals and tattoos. 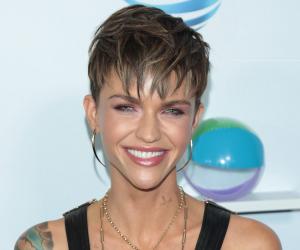 Ruby Rose first gained recognition in 2002 when she joined the 'Girlfriend Model Search' competition, organized by the Australian magazine 'Girlfriend.' She was one of the finalists, and finished second after Catherine McNeil.

After a short break from modeling, she released her own capsule fashion line from the Australian fashion label ‘Milk and Honey’ in 2010. She also collaborated with the street footwear brand ‘Gallaz.’

In 2014, she designed and released ethical street-wears under the clothing range 'Faircloth Lane,' in collaboration with her then partner Phoebe Dahl. She went on to feature on a number of leading magazines, such as 'Vogue Australia,' 'InStyle Magazine,' 'Maxim,' and 'New York's Inked Magazine.'

In 2007, Ruby Rose decided to shift from modeling to television, and participated in the national 'MTV VJ Search' along with 2000 other contestants. She was hired at the end of the three-week program, and went on to host 'MTV Australia' till 2011.

During 2009, she appeared as a guest in the TV series 'Talkin' 'Bout Your Generation,' in which she represented ‘Generation Y’ along with comedian Josh Thomas. The same year, she was a guest judge on the episode 'Media Virgins' of 'Australia's Next Top Model.' She also appeared as a correspondent for the live finale of the show.

She was a co-host on the Australian television news talk show 'The 7pm Project' from 2009 to 2011, after which she left the program. She also hosted the red carpet event at 'MTV Australia Awards 2009.'

In 2010, she was the host of the Australian version of 'Ultimate School Musical,' which follows a group of school-going teenagers for six weeks as they attempt to produce high quality music. That year, she became an official correspondent of ‘Foxtel’ for the ‘Vancouver Winter Olympics’ after hosting the ‘Foxtel Mardi Gras’ for three years straight.

She reportedly stayed unemployed for two years before landing her breakthrough acting opportunity in the ‘Netflix’ drama series 'Orange Is the New Black' in 2015. Casting agent Jennifer Euston selected her for the recurring role of ‘Stella Carlin,’ whom she portrayed throughout season three and season four of the show.

In 2015, she also appeared in the guest role of ‘service robot Wendy’ in the science fiction series 'Dark Matter' and co-hosted the 'MTV Europe Music Awards.'

In January 2017, she made a guest appearance on 'The Ellen DeGeneres Show.' Later in the year, she appeared as a contestant on the musical reality competition 'Lip Sync Battle.'

Who is Ruby Rose? Everything You Need to Know

Who is Ruby Rose? Everything You Need to Know