Apparatus designed for carrying out executions by beheading

A guillotine is an apparatus designed for efficiently carrying out executions by beheading. The device consists of a tall, upright frame with a weighted and angled blade suspended at the top. The condemned person is secured with stocks at the bottom of the frame, positioning the neck directly below the blade. The blade is then released, swiftly and forcefully decapitating the victim with a single, clean pass so that the head falls into a basket or other receptacle below.Guillotine 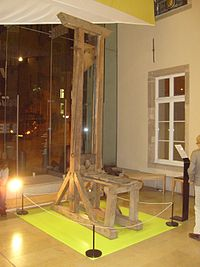 The guillotine is best known for its use in France, particularly during the French Revolution, where the revolution's supporters celebrated it as the people's avenger and the revolution's opponents vilified it as the pre-eminent symbol of the violence of the Reign of Terror. While the name "guillotine" itself dates from this period, similar devices had been in use elsewhere in Europe over several centuries. The use of an oblique blade and the stocks set this type of guillotine apart from others. The display of severed heads had long been one of the most common ways European sovereigns exhibited their power to their subjects.

The guillotine was invented with the intention of making capital punishment less painful in accordance with Enlightenment thought. Prior to the guillotine, France had previously used beheading along with many other methods of execution, many of which were substantially more gruesome and required some skill to be done properly. After its adoption, the device remained France's standard method of judicial execution until the abolition of capital punishment in 1981.

1853 edition of a work by John Wilson Croker

The French Revolution in Three Volumes, Volume 3: The Guillotine.