Atomic battery refers to an energy storage device that uses the energy from the decay of a radioisotope to generate electricity.

Nuclear battery technology began in 1913, when Henry Moseley first demonstrated the beta cell. The field received considerable research attention for the possibility of a long-life power source for space exploration needs during the 1950s and 1960s. In 1954 RCA researched a small atomic battery for small receivers and hearing aids.

Since that time, many types and methods have been designed to extract electrical energy from nuclear sources. The scientific principles are well known, but modern nano-scale technology and new wide-bandgap semiconductors have created new devices and interesting material properties previously unavailable. 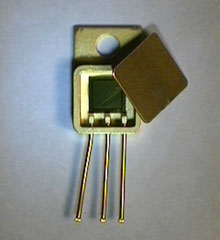 In 2009, Widetronix began working with Lockheed Martin to develop nuclear batteries for military applications. The batteries were expected to power electrical circuits that protect military planes and missiles from tampering, by destroying information stored in the systems or by sending out a warning signal to a military center. The batteries were also expected to last twenty five years. The battery was developed on the concept of betavoltaics and paired with benign isotopes such as tritium.

Moscow Institute of Physics and Technology 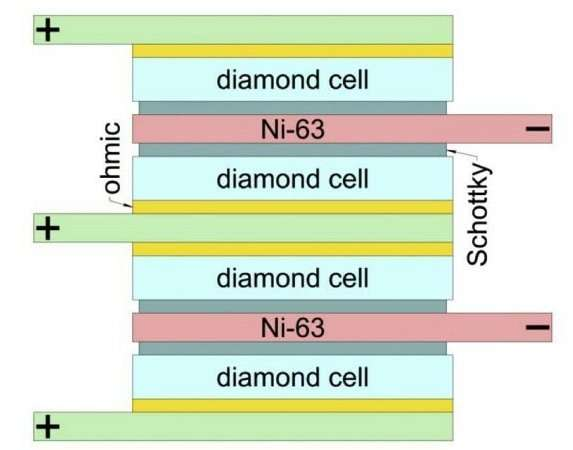 Researchers from the Moscow Institute of Physics and Technology (MIPT), the Technological Institute of Superhard and Novel Carbon Materials (TISNCM), and the National University of Science and Technology have optimized the design of a nuclear battery generating power from the beta decay of radioactive isotope nickel-63. The prototype packs about 3,300 milliwatt-hours of energy per gram, about ten times more than commercial chemical cells. The research team developed a way of increasing the power density of a nuclear battery almost tenfold. They developed and manufactured a betavoltaic battery using nickel-63 as the source of radiation and Schottky barrier-based diamond diodes for energy conversion.

Nano Diamond Battery (NDB) is developing a diamond nuclear-powered battery that is expected to last for up to 28,000 years. To build the nano diamond battery, NDB uses radioactive isotopes from nuclear waste with layers of paneled nano diamonds. The micro-sized single crystal diamonds rapidly move heat away from the radioactive isotope materials, and it is this transaction of thermal energy that generates electricity. The first prototype diamond nuclear voltaic battery concept using waste graphite from a graphite-cooled nuclear reactor was developed with heat-conducting diamonds pulling energy into electricity, a similar concept to NDB's, but with layers of the diamond and radioactive waste panels to generate higher amounts of energy. The challenge with these batteries is that the battery cell produces a small amount of energy and has to be combined in large numbers to power consumer devices.

Conversion techniques can be grouped into two types: thermal and non-thermal.

The Advanced Stirling radioisotope generator (ASRG) produces electricity by a triple energy transformation: It first turns the thermal energy from the hot radioisotope fuel into the high-speed kinetic motion of a small piston and its companion displacer. Development of ASRG flight units was in process until they were cancelled in 2013.

Radioisotope thermoelectric conversion systems convert heat generated by the natural decay of radioactive isotopes into electric power. The system works by converting thermal energy into electrical energy through devices known as thermocouples. The decay of radioactive isotopes produces heat that is then transferred to one side of the thermocouple. The temperature difference between the fuel and the atmosphere allows the device to convert this heat into electricity.

A thermionic conversion or converter is a device that converts heat into electricity using thermionic emission rather than first changing it to some other form of energy. A thermionic power converter has two electrodes. One of these electrodes is raised to a sufficiently high temperature to become a thermionic electron emitter. The other electrode, called a collector because it receives the emitted electrons, is operated at a significantly lower temperature. The space between the electrodes is sometimes a vacuum but is normally filled with a vapor or gas at low pressure.

Non-thermal converters output power is not a function of temperature difference. They extract a fraction of the nuclear energy as it is being degraded into heat rather than using thermal energy to run electrons in a cycle.

Electrostatic conversion extracts energy from emitted charged particles when their charge builds up in a conductor, thus creating electrostatic potential. Without a dissipation mode, the voltage can increase up to the energy of the radiated particles, which may range from several kilovolts up to megavolts. The built up energy can be turned into usable energy through direct-charging generators and electromechanical conversion.

In direct-charging generators, the primary generator consists of a capacitor charged by the current of charged particles from a radioactive layer deposited on one side of the electrodes. Spacing can either be vacuum or dielectric. Negatively charged beta particles or positively charged alpha particles, positrons, or fission fragments may be utilized. This form of nuclear-electric generator dates to 1913, but few applications have been found for the low currents and high voltages, provided by direct-charging generators. Oscillators or transformers are used to regulate the voltages and the current.

Electromechanical conversion batteries use the buildup of charge between two plates to pull one bendable plate towards the other, until the two plates touch, discharge, equalizing the electrostatic buildup, and spring back. The mechanical motion produced can be used to produce electricity through flexing of a piezoelectric material or through a linear generator.

Optoelectric nuclear batteries have also been proposed by researchers of the Kurchatov Institute in Moscow. A beta-emitter would simulate an excimer mixture and the light would power a photocell. The battery would consist of an excimer mixture of argon and xenon in a pressure vessel with an internal mirror surface, finely divided Tc-99, and an intermittent ultrasonic stirrer, illuminating a photocell with a bandgap tuned for the excimer. The advantage of this design is that precision electrode assemblies are not needed and most beta particles escape the finely divided bulk material and contribute to the battery's net power.

Radiovoltaic conversion is a device that converts the energy of ionizing radiation into electricity using a semiconductor junction, similar to the conversion of photons into electricity in a photovoltaic cell. Depending on the type of radiation targeted, these devices are called alphavoltaic, betavoltaic, or gammavoltaic. Betavoltaics often find the most attention because they emit the least amount of radiative damage, allowing longer lives with lower shielding.

Alphavoltaic conversion are devices that use a semiconductor junction to produce electrical energy from energetic alpha particles.

Betavoltaic conversion devices use a semiconductor junction to produce electrical energy from energetic beta particles. A commonly used source is the hydrogen isotope tritium. These devices are particularly well-suited to low-power electrical applications where long life of the energy source is needed, such as implantable medical devices or military and space applications.

Gammavoltaic conversion devices use a semiconductor junction to produce electrical energy from energetic gamma particles and have only been considered since the 2010s. Gammavoltaic devices have been researched using diamond or Schottky diodes.

While radioisotopes that have been used in atomic batteries include:

US startup NDB unveils a nano-diamond battery made from nuclear waste, that could last up to 28,000 years.
Researchers are developing a new battery powered by lab-grown gems made from reformed nuclear waste. If it works, it will last thousands of years.
Prototype nuclear battery packs are show to have times more power.
New atomic effect promises to potential isotopic battery, with the project using a different way to control the high-speed release of energy stored in isotopes of materials.
A twenty-five year battery: long-lived nuclear batteries powered by hydrogen isotopes are in testing for military applications.

The Radioactive Diamond Battery That Will Run For 28,000 Years

US startup unveils battery made from nuclear waste that could last up to 28,000 years - Energy Live News