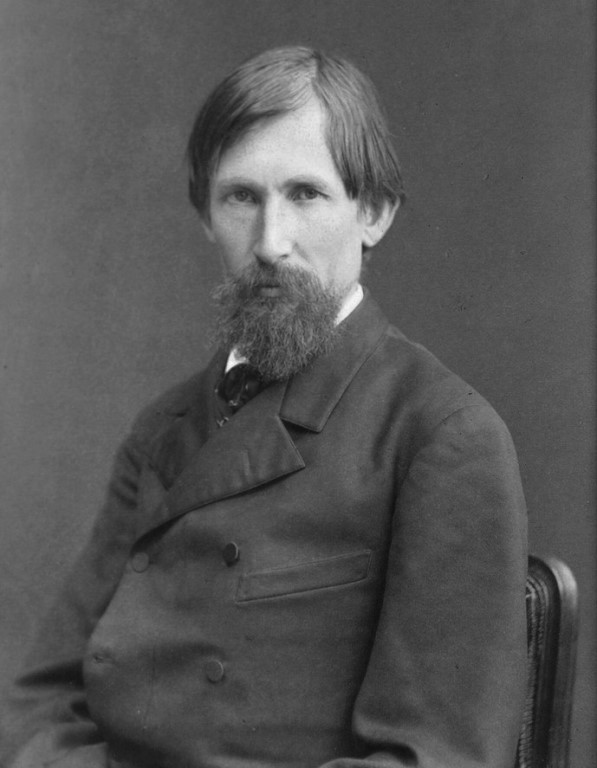 one of the most famous Russian artists. His paintings such as "Ivan Tsarevich on the Gray Wolf" and "The Knight at the Crossroads" are considered classics and are studied at school.Vasnetsov was born in Vyatka province and spent his entire childhood in Vyatka. This realm of truly Russian nature and folklore could not but leave a mark on the soul of the future artist, therefore, landscape always plays an important role in his paintings.

During his studies in St. Petersburg (at the Academy of Fine Arts), he often illustrated books. Subsequently, these works became "drafts" of his masterpieces, because it was then that he tried to depict the plots of folk tales. Nevertheless, at that time, the everyday genre reigned in art, and Vasnetsov succumbed to the current.

"After the massacre of Igor Svyatoslavich with the Polovtsy"

His first famous painting was "After the massacre of Igor Svyatoslavich with the Polovtsy" (1880). It caused disapproving criticism: much of it was unusual. Its main feature was that the artist focused not on the events, but on the essence of the "Words about Igor's regiment". That is why the fallen Russian army is depicted here. We see quite a lot of bodies on the plain. Polovtsy lie in very unnatural poses face down. According to legend, because of this situation, the souls of fighters will never be able to leave their bodies and find peace. Russians, on the contrary, are shown pacified, and their bodies seem to continue to cover and protect the earth. 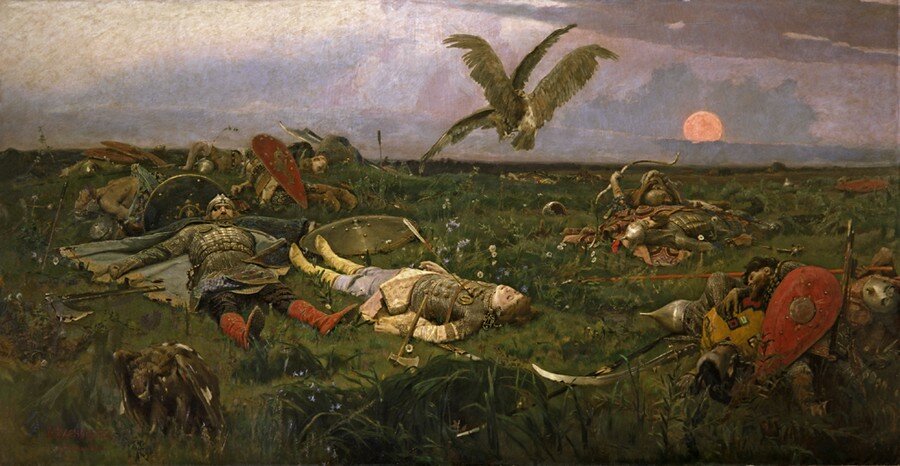 "After the massacre of Igor Svyatoslavich with the Polovtsy" 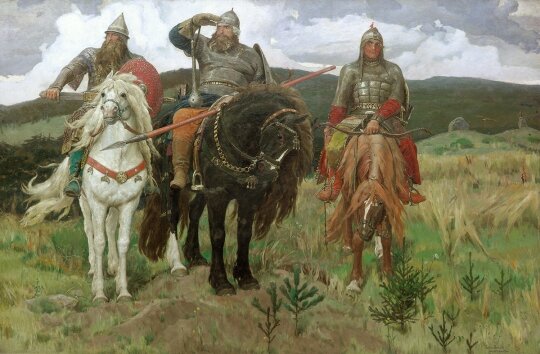 Vasnetsov's most famous canvas is undoubtedly the "Bogatyrs" (1898). In this painting, Vasnetsov slightly raises the horizon line, and the viewer looks at the riders from below, whose clear silhouettes stand out against the background of light clouds. Ilya Muromets is depicted in the center. There is a confident and calm strength in him. Alyosha Popovich, on the right, looks crafty. This shows that the youngest of the heroes takes not only by force, but also by cunning and ingenuity. In addition, a psaltery is attached to his saddle, which emphasizes his cheerful character. Dobrynya Nikitich is located to the left of all. His image shows thoughtfulness and peace, which is emphasized by the sword half-drawn from the scabbard. 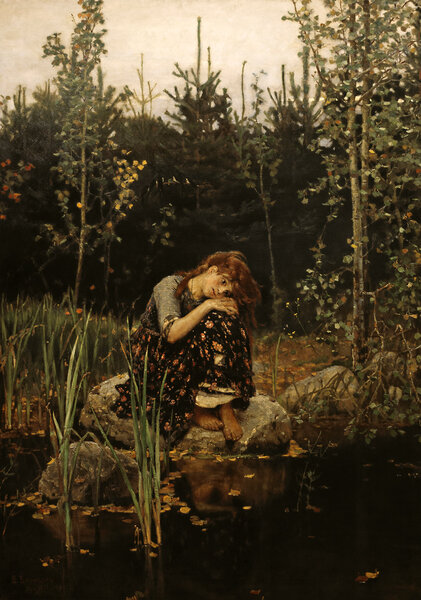 Vasnetsov was inspired to "Alyonushka" (1881) in the woods near the Akhtyrka estate. There he often painted landscapes, thinking over the future picture. Alyonushka herself became a peasant woman who met the artist on the path. The girl, heartbroken, sat by the pond with an extinct and wistful look. The pale gray sky, the dark surface of the water and the fallen aspens emphasize the depressed state of the heroine.

In the painting "The Flying Carpet" (1880), the motifs of Arabic and Russian fairy tales are surprisingly intertwined. We see the proud Ivan Tsarevich returning home from the next task of the tsar. He is dressed in a national festive silk-lined suit and flies on an airplane carpet with an ancient Russian ornament. The feeling of flight is created thanks to the developing carpet, which is compared to the birds in the lower left corner of the picture. Against the background of a foggy landscape, Prince Ivan stands out. The color scheme contrasts strongly, making the hero look especially victorious. By the way, if you look closely, you can see not a fire in the lantern, but a Firebird.Vasnetsov's creativity, subject to the law of ancient Russian beauty, is an important stage in the development of the art direction (neo-Russian style). The artist died at his home in Moscow on 23.06.1926. His paintings still remain a national treasure, reflecting the heroism and soul of the Russian people. 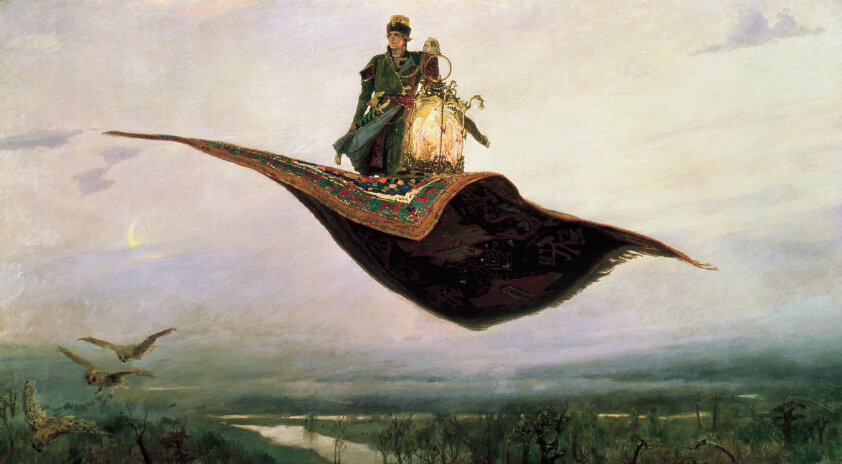 Viktor Vasnetsov was born in Kirov.