The White House is the official residence and office of the president of the United States. Located at 1600 Pennsylvania Avenue N.W. in Washington, D.C., it is one of the most famous and recognizable houses in the world. The White House and its grounds occupy 18 acres and has been occupied by the president of the United States since the administration of George Washington (1789-97). The building is 55,00 square feet with six floors and 132 rooms, 16 of which are family guest rooms, along with 35 bathrooms. In the house are 28 fireplaces, 412 doors, 147 windows, multiple staircases, and three elevators. The kitchen is equipped to serve full dinner for up to 140 guests and hors d'oeuvres for 1,000 plus visitors. When painted, the exterior requires 570 gallons of paint. 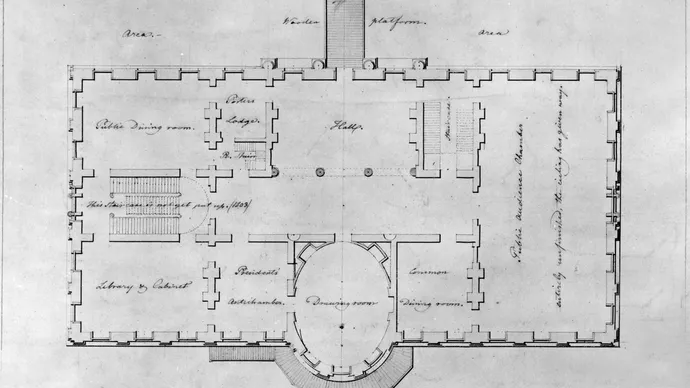 Original plan of the White House.

The Oval Office has, since 1909, been the primary workspace for the president since President William Howard Taft first used the early iteration of the Oval Office. Previous to the Oval Offices, other offices were used, such as the southwest corner of the second floor, used by Thomas Jefferson, and since turned into the State Dining Room. Presidents from Quincy Adams to William McKinley used the east side of the second floor for themselves and their staff. 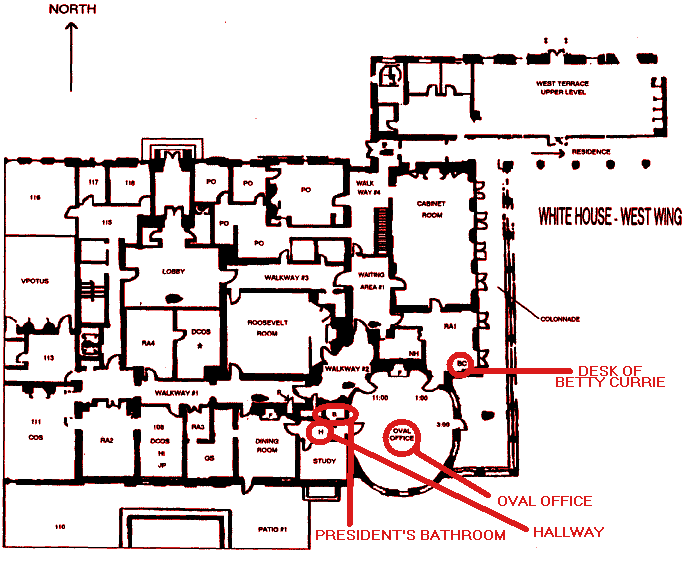 Map of the West Wing.

The West Wing, constructed during the Theodore Roosevelt administration, was later expanded by William Howard Taft and is the house for the offices of the president, containing the Oval Office, Cabinet Room, Situation Room, and the Roosevelt Room. The Oval Office was moved to the southeast corner of the West Wing by Theodore Roosevelt, overlooking the Rose Garden, which has been used by every president since. 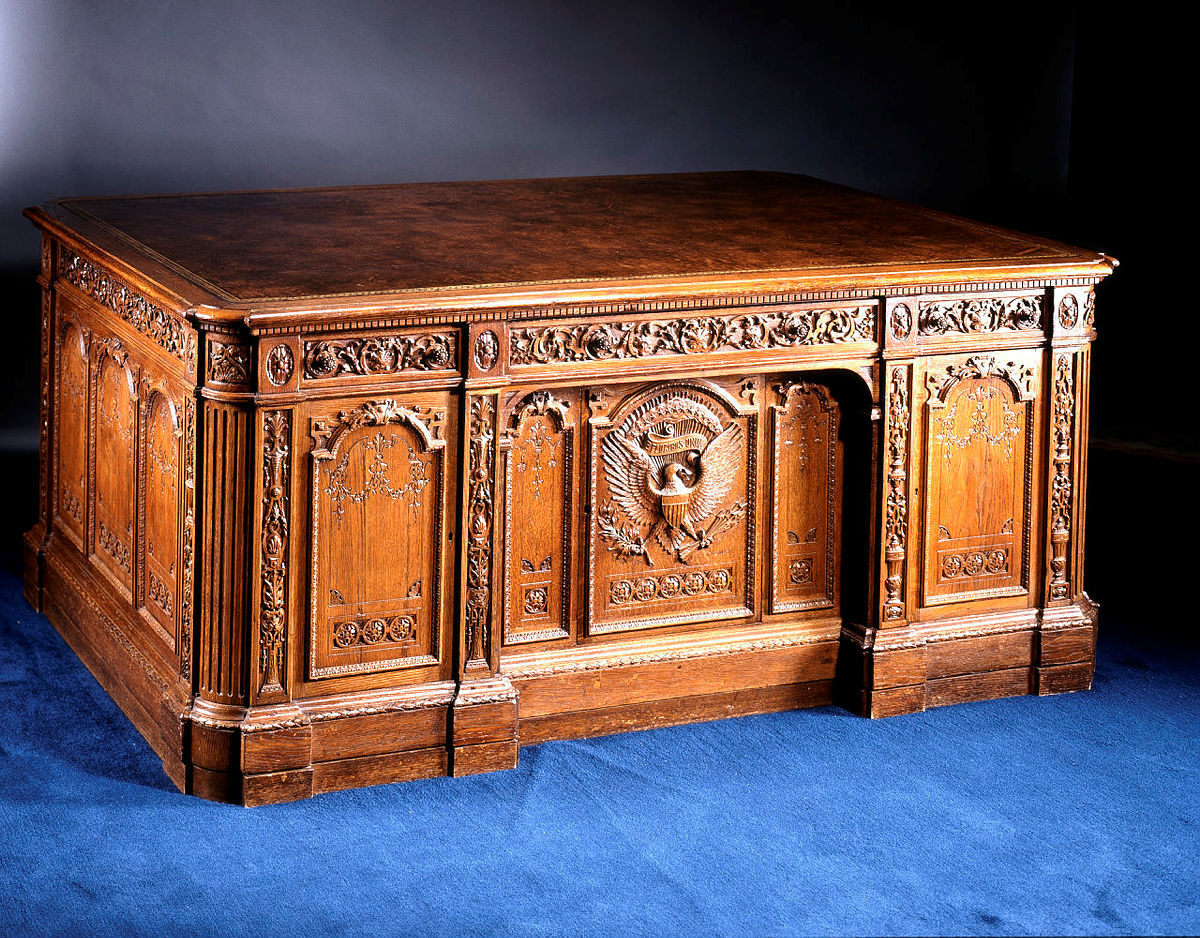 The Resolute Desk is a double pedestal desk made from the oak timbers of the British ship H.M.S. Resolute. The desk was a gift to President Rutherford B. Hayes by Queen Victoria in 1880, and since that time the desk has been used by almost every president, with some exceptions including presidents Lyndon B. Johnson, Richard Nixon, and Gerald R. Ford. The desk was modified by President Franklin D. Roosevelt, with his request being that the desk's rear kneehole be fitted with a panel carved with the Presidential Coat-of-Arms. It would not be fitted until 1945, and Roosevelt would not live to see it installed. 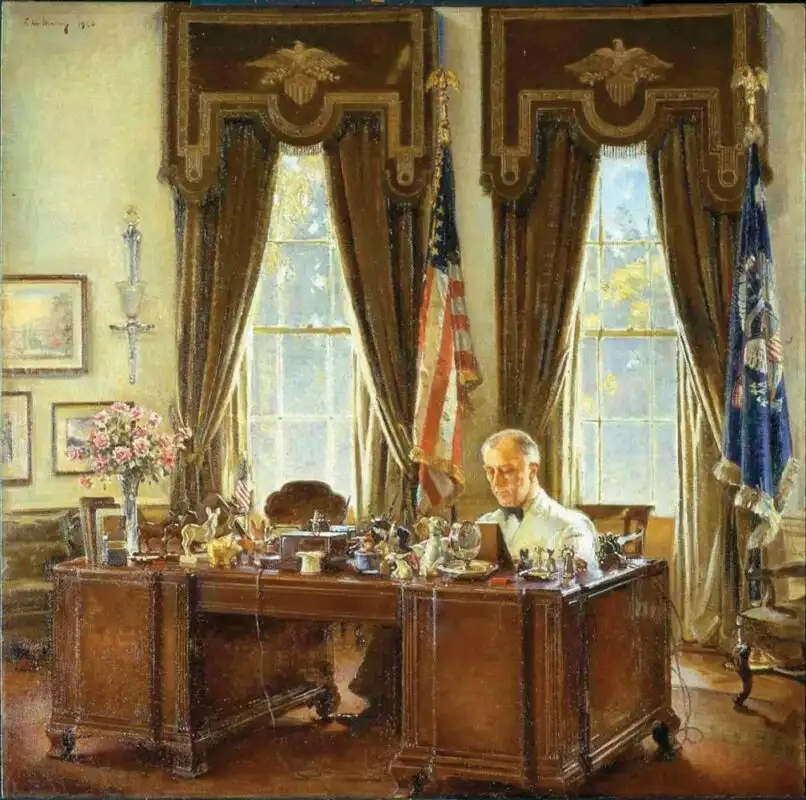 Painting of Franklin D. Roosevelt at the Resolute Desk without the kneehold covered.

The desk was first used in the Oval Office during the presidency of John F. Kennedy. President Lyndon B. Johnson selected a different desk for the Oval Office, and the Resolute Desk went on to The Smithsonian, where it was displayed from 1966 to 1977. In 1977, President Jimmy Carter requested the desk be returned to the Oval Office, and since then it has been used by every president.

The popular misconception is that the White House was first painted white to cover the burn marks left after British soldiers burned the house on August 14, 1814, during the War of 1812. However, it was first painted white in a lime-based whitewash in 1798 to protect the sandstone exterior from moisture and cracking during winter freezing. Initially, the White House was known as the "President's Palace" before it was renamed the "Executive Mansion" and eventually would be changed to the "White House" by President Theodore Roosevelt.

James Hoban was an Irish immigrant to America and an ambitious architect located in Charleston, South Carolina, where his Georgian style of architecture became popular. Initially, French-born architect, Pierre Charles L'Enfant, was chosen by President George Washington to build the president's house. However, L'Enfant wanted to build an extravagant and palatial building, which led to disagreements. The president wanted a conservative design and invited Hoban to submit drawings. This was the design chosen by President Washington.

The White House took eight years to be built. Despite the amount of work Hoban had elsewhere, he would return to the White House in 1814, after the building was burned, to lead the restoration of the building. In 1902, a major renovation of the White House was undertaken by President Theodore Roosevelt, including the relocation of the president's offices from the second floor to the newly constructed temporary Executive Office Building, now known as the West Wing.

Less than fifty years after this renovation, there were signs of structural weakness, and President Harry S. Truman undertook another renovation of the building, in which everything but the outer walls was dismantled. This renovation was finished by 1952, at which point the Truman family moved back into the White House.

The Secret Life of the White House

Title
Author
Date
Publisher
Description
Biden order would make US government carbon neutral by 2050
By MATTHEW DALY
December 8, 2021
AP NEWS
WASHINGTON (AP) -- President Joe Biden on Wednesday signed an executive order to make the federal government carbon-neutral by 2050, aiming for a 65% reduction in planet-warming greenhouse gas emissions by 2030 and an all-electric fleet of car and trucks five years later.
New COVID variant threat causes worldwide scramble
By RAF CASERT and CALVIN WOODWARD
November 27, 2021
AP NEWS
BRUSSELS (AP) -- Nearly two years into the COVID-19 pandemic, the world is racing to contain a new coronavirus variant potentially more dangerous than the one that has fueled relentless waves of infection on nearly every continent.
Many environmentalists back Biden's move to tap oil reserve
By MATTHEW DALY
November 24, 2021
AP NEWS
WASHINGTON (AP) -- Democrats and climate activists generally supported President Joe Biden's decision to release a record 50 million barrels of oil from America's strategic reserve, even as the move appeared to contradict his long-term vision of combating climate change.
GOP embraces natural immunity as substitute for vaccines
By ANTHONY IZAGUIRRE
November 21, 2021
AP NEWS
TALLAHASSEE, Fla. (AP) -- Republicans fighting President Joe Biden's coronavirus vaccine mandates are wielding a new weapon against the White House rules: natural immunity.They contend that people who have recovered from the virus have enough immunity and antibodies to not need COVID-19 vaccines, and the concept has been invoked by Republicans as a sort of stand-in for vaccines.
New hurdle for COVID-19 home testing -- the holiday season
By MATTHEW PERRONE
November 20, 2021
AP NEWS
WASHINGTON (AP) -- Millions more home tests for COVID-19 are hitting store shelves, but will there be enough for Americans hoping to screen themselves before holiday gatherings?Gone are last year's long lines to get tested, thanks to nearly a year of vaccinations, increased testing supplies and quicker options.
SHOW MORE