Ship designed to transport liquid or gas cargo in tanks.

For loading and discharging of goods on/from tankers, a special pumping system is used and there are tanks for the transported cargo. The hull of such a vessel is sheathed with special metal sheets that give shape to the tanker and divide it into separate compartments that are filled with liquid cargo. The double metal bottom and thick board of the vessel provide safe transportation conditions and protection of cargo from spillage, damage and water penetration. The main part of tankers for liquid cargo transportation is universal, which makes it possible to simultaneously transport various liquid cargo. Heavy-duty vessels can transport about 320,000 tons of oil products at one time.

Tankers developed as a separate type of vessel in the second half of the 19th century, this was due to the development of liquid fuel oil and necessity of transportation it from place of origin in large volumes. Before the advent of tankers, oil transported, as a rule, on small sailing vessels in barrels which were placed in the holds or on decks.

The first specialized vessel for carrying liquids as a tanker "Zoroaster" was built in 1876 in Sweden with deadweith 250 tons. This tanker made by order of russian company "The Petroleum Production Company Nobel Brothers".

After the First World War, during which many tankers were sunk by German submarines, the growth in tonnage of the tanker fleet accelerated. From 1924 to 1939, the average deadweight increased from 7,000 to 12,000 tons and the speed from 10-11 knots to 16-19 knots.

The largest supertanker in the world Knock Nevis was built 1976. The tanker went out of service in 2010. Length was 458 meters, and the displacement was 657 thousand tons. 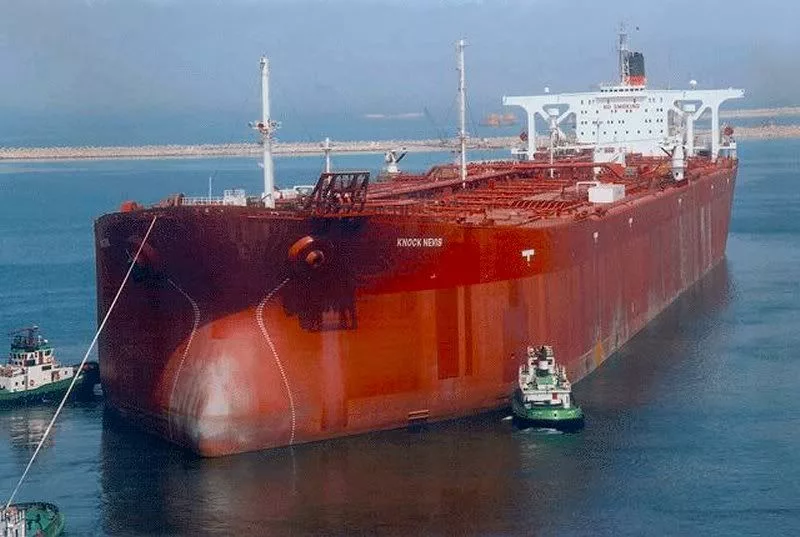 The development of medium and small tankers in the world is going evenly, at the same time, tanker building depends on the situation on the world oil market, world politics and changes in shipping rules. The most significant transportation of oil by tankers is carried out from the Persian Gulf region to the industrialized centers of the world: Europe, Japan, the USA and others.

The crisis of the 1970s, associated with the temporary closure of the Suez Canal and a sharp decline in world oil production, had a great impact on the tanker fleet. Many tankers were scrapped, converted to floating oil storage facilities (FSOs) or never completed. This was followed by tougher environmental requirements and the appearance of double-hulled vessels, which increased the cost of building a tanker. Currently, there is a growing interest in tankers and gas carriers of the Arctic navigation, due to the development of hydrocarbon production in the northern seas.

Large- capacity tankers are considered to have a deadweight of more than 45,000 tons, and they account for the main load for transporting oil by sea. River-sea deadweight tankers are used to transport oil along river arteries 2 000 – 5 000 tons.

The impressive size is explained by the economic «scale effect». The cost of transporting one barrel of oil on sea vessels is inversely proportional to their size. In addition, the number of crew members of a large and medium-sized tanker is approximately the same. Therefore, the giant ships significantly reduce the company’s transportation costs. However, not all seaports are able to host a super tanker. Such giants need deep-water ports. For example, most Russian ports are not able to accept tankers with a deadweight of more than 130-150 thousand tons due to fairway restrictions. Cargo areas of the tanker are divided by several transverse and one to three longitudinal bulkheads into tank tanks. Some of them only serve for receiving water ballast. Access to the tanks you can get from the deck through the neck of a small size with tight lids.

In order to reduce the risk of oil and petroleum product leaks as a result of accidents, in 2003 the international Maritime organization approved EU proposals to accelerate the demolition of single-hulled oil tankers. Since April 2008, transportation of all heavy fuels on vessels not equipped with a double hull has been prohibited. Oil and petroleum products are loaded into tankers from the shore, and unloading is carried out using ship pumps and pipelines laid in the tanks and along the deck. However, supertankers with a deadweight of more than 250 thousand tons, as a rule, simply can not enter the port, being fully loaded. They are filled from offshore terminal platforms and unloaded by pumping the liquid contents to smaller tankers.

Today, more than 4,000 tankers sail in the world’s seas and oceans. Most of them are owned by independent shipping companies. Oil corporations enter into chartering agreements with them, obtaining the right to use the vessel.

Title
Date
Link
topships.org/fleet
Is a