Who is NBA YoungBoy?

NBA YoungBoy is an American rapper who first came to limelight in 2016 as one of the promising stars of the current generation. Immensely talented, Gaulden took to rapping and recording early in his life. Inspired by local artist, he came up with his debut album in 2015, at the age of 16. He soon followed it with release of ‘Mind of a Menace’ trilogy. Just when everything seemed to be perfectly in sync, destiny brought a major jolt in life as he was arrested on suspicion of first degree attempted murder and his surging career took a dip. However, not taking it slow, YoungBoy did not put a stop to his music career and instead got himself deeply involved in it. The uncertainty behind the future of his burgeoning career was overruled by the release of his hit singles while in prison. ‘Win or Lose’ was a major hit and made him an overnight sensation. Some of his later hits include ‘Untouchables’, ‘No Smoke’ and ‘Outside Today’, each of which charted at different positions on Billboard Hot 100. 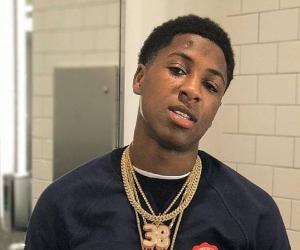 A phenomenal American rapper, NBA YoungBoy first began producing music when he was merely fourteen years of age. In 2014, he released his first mixtape, ‘Life Before Fame’ as NBA YoungBoy. He followed it with a string of mixtapes including ‘Mind of a Menace’, ‘Mind of a Menace 2’, and ‘Mind of a Menace 3’. In 2016, YoungBoy first came to limelight with his super hit mixtape ’38 Baby’, which received millions of view on YouTube. He followed it with a ‘song-for-song rap beef’ with fellow Baton Rouge rapper Scotty Cain. The song attracted a lot of attention due to its ‘death-threatening’ lyrics.

Just when his music career was soaring upwards, YoungBoy faced a blip in his personal life—he was arrested in Austin, Texas on suspicion of first-degree murder. While in jail, YoungBoy released several songs including ‘Win or Lose’, ‘Don't Matter’ and ‘Too Much’, all of which were big hits. ‘Win or Lose’ went viral and made YoungBoy a household name.

In 2018, YoungBoy’s career took a meteoric rise as his single ‘Outside Today’ became the highest charting song of his career, peaking at number 35 on Billboard Hit 100. YoungBoy’s upcoming releases include his debut studio album ‘Until Death Call My Name’ which is expected to release in April 2018. Recently, in February 2018, YoungBoy was arrested before a concert at The Moon nightclub in Tallahassee on the charges of committing assault, weapons violations and kidnapping.

Who is NBA YoungBoy? Everything You Need to Know

Title
Date
Link
youngboynba.com
Is a