Migi (ミギー Migī, "Righty"), (pronounced mee-gee) is the name chosen by the parasite that infested Shinichi Izumi's right hand. Migi is unlike most other parasites in the series. Due to not consuming the brain of the host (which also allowed Shinichi to retain his individuality), he did not develop the urge to eat humans. He is one of the main protagonists along with Shinichi.

Migi is usually shaped like a right hand in order to blend in with Shinichi's body. However, he can change his forms depending on the situation. He can shapeshift into weapons, such as bladed tentacles, or create human-like eyes and a mouth to communicate. As parasites are limited to only being able to mutate the area in the body they merged with, Migi is only able to transform the right arm of Shinichi. He originally infested all the way to his shoulder, but after losing 30% of his body, now only controls slightly past the elbow.

When not hiding, he has hazel eyes and a humanlike mouth and lips. 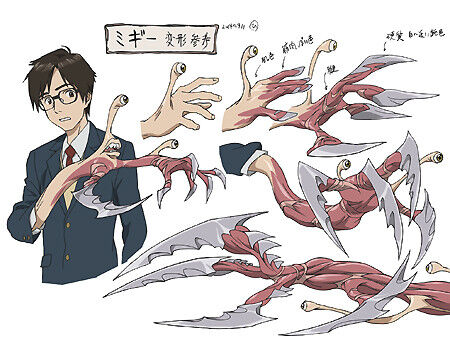 Migi is a parasite and as such lacks the emotions of a human being. His main purpose is to keep him and his host (Shinichi) alive, even if that means killing his own kind, valuing self-preservation above all else. He also isn't above threatening Shinichi at times, such as when he threatened to gouge out his eyes and ears. Migi often thinks of Shinichi as a threat because he is always getting into fights to save others, and he once threatened to harm him to stop him from getting them in any danger.

Due to his curious nature and the reading it leads to, it can be argued that Migi is quite intelligent. This is further solidified by the fact he learned Japanese in "one day." Shinichi also stated that his right hand was more intelligent than his brain. He is also a capable strategist and can easily think of ways to combat Parasites. Despite, or perhaps because of, his lack of emotions, Migi is very logical and fully capable of listening to reason, and is in fact that one who proposes that he and Shinichi work together in order to survive. He can also be manipulative, such as when he convinces Shirou Kuramori to keep their situation secret by telling him about Shinichi's hardships and appealing to his emotions.

Migi is shown frequently to have a low opinion of humanity. He claims that, out of all life on Earth, humans are the closest things to demons, since humans eat many different kinds of lifeforms in order to survive, while his kind only eats one or two. He also expresses disdain for humanity's egocentricity in claiming they are helping the Earth. As such, Migi refuses to co-operate with Shinichi to take down Parasites, saying he is an ally to no-one but himself. Due to this cynical nature, Migi frequently warns Shinichi that he will kill his friends if they find out about him.

Despite his lack of feeling for either parasite or human, he has been frequently impressed with other parasites' intelligence and capabilities as well as curious towards his own species and the way they develop.

After fusing himself with Shinichi to save his life, Migi slowly starts to gain more human-like aspects, sometimes even showing respect towards others, while Shinichi becomes more like him. Migi is also interested in how humans reproduce, asking Shinichi if he can cause an erection in his sexual organ, and even becoming disappointed when Shinichi doesn't have sex with Murano.

Although Migi usually has no qualms for killing either human or parasite, after being absorbed by Gotou he refuses to kill the other parasite. He states it would be equivalent to a human's concept of murder for him to kill Gotou, though he is perfectly willing to leave the decision to Shinichi. At the same time, the merge opened up new perspectives for him and he soon decides to go dormant indefinitely in order to analyze the experience.

Migi considers Shinichi to be his friend and states that he's "glad [he] failed to take over his brain." When Migi visits Shinichi in his dream, before going to sleep for an indefinite amount of time, he thanks Shinichi for all their experiences together and that he was fortunate enough to make a friend. In the end, Migi's final judgement of humanity is that they are wonderful for having time to spare for others.