Who is Kayla Phillips?

Kayla Phillips is a renowned American model and social media star. Besides this, she is the girlfriend of famous NFL player DeSean Jackson. She rose to fame through her Vine channel ‘imKaylaPhillips’ which had more than 143K followers at the time the app was disabled. She also gained much popularity with her Instagram posts, and today has 852K dedicated fans on the photo and video sharing site. Besides her social media fame, Phillips is popular as a model. She has modeled for various companies. Her well-known works include modeling for the clothing collection ‘Civil Women’s Fall Hear Us Roar’ which she also promoted on her social media accounts. Possessing hot body measurements of 35-24-26, this American beauty routinely shares her life on the social media platforms. The young diva has also appeared on her BF’s docu-series titled ‘DeSean Jackson: Home Team’. Kayla Phillips is also extremely popular on Twitter. As April 2017, she has 30.4K fans on her Twitter handle. 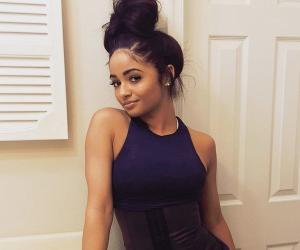 The Meteoric Rise To Stardom

Kayla Phillips created an account on Vine with the name ‘imKaylaPhillips’ and started creating videos for it. She uploaded her first video in May 2013 and by February of 2014, she had become a frequent Viner. She started uploading more and more videos and this made her earn a greater number of fans. Her fame reached newer heights after she posted a video of hers dancing in Zendaya’s music video ‘My Jame’. After this clip was launched, around 700K people started following her. After that, she started creating Vine videos with Melvin Gregg. People found the clips made by the pair really interesting and even started sharing their videos on social platforms. This made Phillips earn even more name and fame. Apart from making videos, she frequently used Instagram to post her hot pictures and videos and gained 852K dedicated fans on the site (as of April 2017). Besides her career as a social media star, the 26-year-old is also a model. She has worked for ‘Civil Women’s Fall Hear Us Roar’ – a clothing line which she also promoted herself after climbing the online media ladder. Today, Kayla Phillips has thousands of fans and followers on Vine, Instagram and Twitter.

Who is Kayla Phillips? Everything You Need to Know