Gigan (Japanese: ガイガン, Hepburn: Gaigan) is a kaiju from Toho's Godzilla franchise who first appeared in Godzilla vs. Gigan. Gigan is a space monster resembling a species of reptile who was turned into a cyborg by the Nebulans. Gigan sports a huge buzzsaw in its frontal abdominal region and large metallic hooks for hands. Gigan is considered one of Godzilla's most brutal and violent opponents, and the first kaiju in the Toho sci-fi series to make him bleed. Complex listed the character as No. 2 on its "The 15 Most Badass Kaiju Monsters of All Time" list.

Gigan debuts in the 1972 film Godzilla vs. Gigan, in which it and King Ghidorah are summoned to Earth by the M Space Hunter Nebula aliens, insect-like aliens whose planet had been ravaged by another race and wish to subjugate the Earth in order to create a utopia of "perfect peace". However, the monsters are challenged and defeated by Godzilla and Anguirus. In the 1973 film, Godzilla vs. Megalon, Gigan is sent by the Nebulans to assist the people of Seatopia in their assault on humanity by aiding their god, Megalon, in a battle against Godzilla and Jet Jaguar. After having its arm broken by Jet Jaguar however, Gigan retreats into space, leaving Megalon to face Godzilla and Jet Jaguar alone. In the same year, Gigan also makes an appearance in Toho's television series Zone Fighter. After his battle with Godzilla and Jet Jaguar, Gigan is captured by aliens called the Garogans and sent back to Earth to prevent Godzilla from rescuing Zone Fighter. It was temporarily defeated by the former, but revived once Godzilla left and faced Zone Fighter, who eventually killed Gigan. 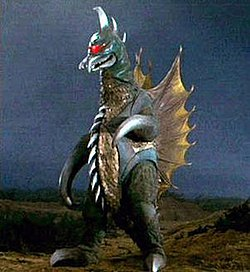 Gigan as featured in Godzilla vs. Gigan

After a 31-year absence, Gigan returned in the film Godzilla: Final Wars. Millennia prior, it had fought Mothra for the fate of the Earth and was defeated. In the present, its mummified body is discovered in Hokkaido and revealed to be a weapon used by the alien Xiliens, who awaken Gigan to assist them in destroying Earth and destroy the flying battleship the Gotengo to stop its human occupants from awakening Godzilla. While the cyborg disables the battleship, the crew succeed. Gigan faces Godzilla in battle, but is defeated. The Xiliens recover and upgrade Gigan with new weapons to assist Monster X in fighting Godzilla and Mothra. Gigan faces Mothra once more and seemingly kills her, but inadvertently decapitates itself with its razor disks before a burning Mothra destroys it.

Godzilla: Save the Earth