Frances Elena Farmer was born on September 19, 1913 in Seattle. Third child of Ernest and Lillian Farmer, Frances has a sister Edith, a brother Wesley but also a half-sister Rita.

Frances Farmer arouses controversy at a very young age. In 1931, she won a prize for an essay entitled "God Dies". The local press headlines: "Seattle Girl Denies God and Wins Prize". Many reproaches and accusations that she will confide, later, in her autobiography, to have lived very badly, this episode plunging her into disarray and loneliness.

In September 1931, she joined the University of Washington to train as a journalist before turning to playwriting.

She became a member of the Dramatic Theatre and met Professor Sophie Rosenstein. She excelled in many plays.

In 1935, a new competition she won allowed her to travel to the USSR. A trip that will be seen in a very bad light. She is unjustly suspected of being a communist. 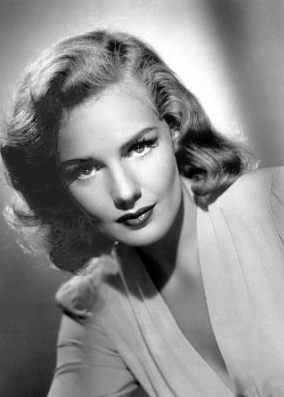 Return to the United States in New York where she signed a contract for seven years with Paramount and then joined Hollywood. At the same time, she became involved with the politician Harry York who will remain close to her.

In 1936, it was her first film: "Too many parents" by Robert F. McGowan with Leif Erickson.

She follows with "Rhythm on the Rarge" which she shares the star with the famous Bing Crosby and which will remain her biggest success in the cinema.

On the private side, she married the young first, Leiff Erickson, a brief and unhappy marriage.

In 1936, she also turns "The Vandal" ("Come and Get It") directed by Howard Hawks, which remains for many her most beautiful role. She follows with "The Toast of New-York" with Cary Grant. A nice success.

The critics are full of praise and see in her a new star, some even comparing her to Greta Garbo.

Frances Farmer rebelled against Paramount refusing to give in to all the demands of this studio considering her as a banal starlet ready to do anything to succeed and she also opposed any use of her private life.

She then moves away from Hollywood to devote herself to her true passion, the stage.

She met Clifford Odets who offered her the lead role in the play "Golden Boy" which was a huge success in New York. The public loves it, the critics are more mixed, sometimes talking about casting error.

France Farmer has a tormented relationship with Clifford Odets. Despite the success of the play, she is excluded from the European tour. She then appears in two other plays in New York that go unnoticed.

It is also during this period that she begins to indulge in excessive consumption of alcohol and drugs.

Threatened with a breach of contract by Paramount, which was impatient, she returned to Hollywood.

She is forced to accept to turn in films of second plan.

In 1942, she was only the second female role in the film "The Knight of Vengeance" ("Son of Fury") alongside Tyrone Power.

That same year, arrested in a state of drunkenness and without a license, she was sentenced to a suspended prison sentence. The nightmare is just beginning.

In 1943, following an aggressive behavior, she is again arrested, dismissed by Paramount and locked up in the sanatorium La Crescenta. She underwent a shock treatment with injections of massive doses of Insulin. She ran away.

When she refused to go back to the movies and thought she was crazy, her own mother had her re-interred at Steilacoon (in Washington).

For many years, she will undergo the worst tortures: electroshock, hydrotherapy (naked diving for six to eight hours in ice water baths), drug experimentation, rape. One will even evoke a lobotomy but this remains uncertain.

Frances Farmer will write in her autobiography: "I was raped by plantons, eaten by rats and poisoned by spoiled food. I was chained in cells, locked in straitjackets and half-drowned in ice baths."

In 1950, she was allowed to move to Seattle where she cared for her parents. She worked as a hotel clerk. Cruelty of fate, it was the hotel in which she had celebrated the world premiere of "Come and Get It" in 1936.

In 1953, recognized as sane, she recovers all her rights, thus escaping the guardianship exercised by her mother.

In 1954 she married Alfred Lobley. She moved to California where she worked anonymously as a secretary in a photo studio.

In 1958, she returned to her acting career. She appeared in various TV series including "This is Your Life" and "Tongues of Angeles". In 1958, it is also her last film for the cinema, "The Party Crashers".

She married Lee Mikesell and separated a few years later.

From 1958 to 1964 she hosted a television show, "Frances Farmer Present" in Indianapolis. Broadcast in the afternoon, this program will remain during six years number 1 in the audiences.

At the same time, Frances Farmer unfortunately returned to her unhealthy habits with alcohol, which led her to new excessive behavior and will cause her to stop her show in 1964. In 1968, she began writing her autobiography.

Too Many Parents - by Robert F. McGowan with Henry Travers

Rhythm on the Range - by Norman Taurog with Bing Crosby

The Gold and the Woman ( The Toast of New York ) by Rowland V. Lee with Cary Grant

Badlands of Dakota - by Alfred E. Green with Broderick Crawford

Among the living by Stuart Heisler with Albert Dekker

The party crashers - by Bernard Girard with Bobby Driscoll

Frances Farmer was born in Seattle.