Who is Elsa Pataky?

Elsa Pataky is a Spanish actor, model, and film producer. She is best known on the international stage as ‘Elena Neves,’ which was the name of her character in the ‘The Fast and the Furious’ franchise for several years. Pataky first appeared in ‘Fast Five’ and reprised her role in ‘Fast & Furious 6,’ ‘Furious 7,’ and ‘The Fate of the Furious.’ She has also appeared in Hollywood films such as ‘Snakes on a Plane’ (2006), ‘Giallo’ (2009), and ‘Give 'Em Hell, Malone’ (2009). However, although she now lives in Australia with her husband, Chris Hemsworth, and their three children, she remains a popular star in her native country, Spain, through her many starring roles in both TV series and native Spanish films. She starred in the 2010 Spanish film ‘Di Di Hollywood.’ She now spends most of her time in Australia, where she has recently appeared in the Australian TV series ‘Tidelands.’ 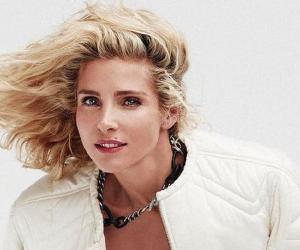 Elsa Pataky’s success in Spain has been nothing short of phenomenal, with roles in more than 18 films and three TV series. She has also been part of innumerable national endorsements and has made many celebrity appearances.

Elsa’s first film, ‘El Arte de Morir,’ (2000) was a major hit in Spain. She worked consistently in a wide range of film genres, including comedy, action, drama, and thriller. Her title role in the comedy film ‘NINETTE’ (2005), which was written and directed by ‘Academy Award’-winning José Luis Garci, brought her unanimous critical acclaim. It also established Pataky as a rising star and a potential leading lady.

Pataky has appeared in many Spanish films. She has co-starred in the French film ‘Iznogood’ and has appeared in ‘Manuale d'amore 2’ (2007). The latter had the second-biggest box-office opening weekend ever in Italy. In 2008, Elsa appeared in another French movie, ‘Skate or Die,’ directed by Miguel Courtois. However, she found international fame in Hollywood.

Elsa launched her Hollywood film career in 2006, in a supporting role in the film ‘Snakes on A Plane,’ appearing alongside Samuel L Jackson. She became famous after playing ‘Officer Elena Neves’ in the 2011 movie ‘Fast Five,’ with Dwayne Johnson as her partner, ‘Luke Hobbs.’ Pataky reprised her role as ‘Neves’ in ‘Fast & Furious 6’ (2013), ‘Furious 7’ (2015), and ‘The Fate of the Furious’ (2017), the sixth, seventh, and eighth installments of ‘The Fast and the Furious’ franchise.

In 2010, Pataky became the face of ‘Time Force's first jewelry collection, ‘Ultimate Jewel,’ appearing in the promotional campaign alongside footballer Cristiano Ronaldo. Following this, ‘NextMovie.com’ named her one of the “Breakout Stars to Watch For in 2011.”

She produced the 2013 romantic drama ‘The Wine of Summer.’

Elsa Pataky was born in Madrid.

Who is Elsa Pataky? Everything You Need to Know

Who is Elsa Pataky? Everything You Need to Know