Cyanea capillata can be found in the cooler regions of the Atlantic, Pacific, North Sea and Baltic. They are especially prevalent near the east coast of Britain. (Grzimek 1972, Nichols 1979). 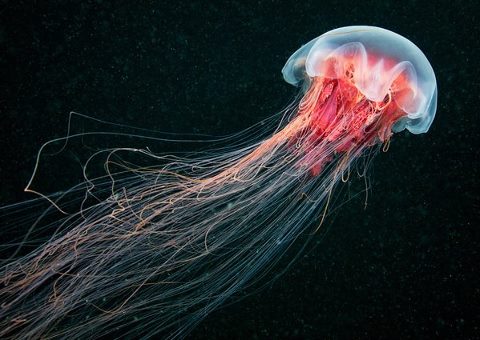 The Lion's Mane Jellyfish is found in the cooler regions of the Atlantic, Pacific, North Sea, and Baltic Sea. They are especially common along the East coast of Britain. They are found in the pelagic zone as medusae and then benthic zone as polyps. (Grzimek 1972, Nichols 1979).

Jellyfish are composed of 94% water and are radially symmetrical. It is dibloblastic, which means that it has two tissue layers. This member of the giant jellyfish has a hemispherical bell with scalloped edges. The bell is divided into eight obvious lobes by eight indentations with second order indentations. Some lobes contain sense organs including odor pits, balance organs, and simple light receptors. Its bell normally ranges in diameter from 30 to 80 cm, with some individuals growing up to a maximum of 180 cm. The oral arms are purple with reddish or yellow tentacles, hence the common name "Lion's Mane". The bell may be pink to reddish-gold or brownish-violet. The jellyfish has no fringing tentacles around the edge of its bell, but it has eight groups of 150 tentacles each on the underside of its umbrella. These tentacles contain very effective nematocysts, as does the upper surface of the jellyfish. (Banister and Campbell 1985, Grzimek 1972, Nichols 1979, Stachowitsch 1992)

The medusa form of the jellyfish reproduces sexually and has separate sexes. The ova and sperm are produced in baglike projections of the stomach wall. The sex cells are relased through the mouth for external fertilization. In the case of Cyanea, the eggs are held in the oral tentacles until the planula larvae develop. The planula larvae then settle on the substrate and develop into polyps. These scyphopolyps reproduce asexually by horizontal division (strobilation) and are then termed strobila. With each division, a small disk forms, and when multiple disks have formed, the uppermost one detaches and swims off as a ephyra. The ephyra develops into the recognized medusa form of the jellyfish. (Grzimek 1972)

Cyanea capillata are continual swimmers that can reach speeds of up to several km per hour and can cover great distances with the aid of marine currents. They are known to form shoals. Kilometer long assemblies can be seen off the coast of Norway and in the North Sea. Cyanea can be dangerous to swimmers when contact occurs, but they do not actively hunt humans. (Grzimek 1972)

Cyanea capillata feeds mainly on fish. It catches its prey by sinking slowly with its tentacles spread in a circle around it. The prey is captured in the "net" of tentacles and stunned by the nematocysts. (Grzimek 1972)

Cyanea capillata is in no danger of extinction.

One of the most distingulishing features of Cyanea capillata is its coloration. Its tendency to form shoals is also fairly unusual. The extremely effective nematocysts are also a prominent feature. Even a dead animal or a detached tentacle is capable of stinging. (Grzimek 1972)

The Encyclopedia of Aquatic Life.

The Invertebrates: An Illustrated Glossary

The Oxford Book of Invertebrates