Who is Steve Nash?

Steve Nash is a Canadian former basketball player who played in the ‘National Basketball Association’ (NBA). With a humble beginning as a university level player, he was not considered talented enough to make it big in the world of sports. However, Nash proved everyone wrong with his outstanding performance while playing for the ‘Phoenix Suns.’ The fact that he was included in the list of ‘100 Most Influential people’ by ‘Time’ bears testimony to the popularity of this great sportsman. He is a proud recipient of the MVP titles and has played for teams like the ‘Los Angeles Lakers’ and ‘Dallas Mavericks.’ He is known for his calm and humorous personality and is often found poking fun at his contemporaries. Nash, who likes to stay away from the limelight, is also a philanthropic individual with a charitable organization of his own. He endorses several campaigns and has been involved with other charitable organizations as well. He is also a passionate filmmaker; he surprised everyone at the ‘Toronto Film Festival’ with a documentary on Canadian athlete Terry Fox, which he co-directed with his cousin Ezra Holland, a filmmaker. 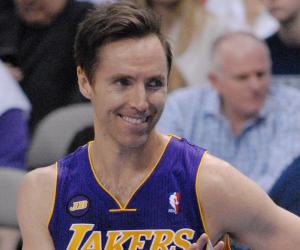 He went to ‘Santa Clara University,’ and played for his college in the NCAA tournament, where he was the first freshman to be named the ‘Most Valuable Player.’ In 1996, after graduation, he was selected by the ‘Phoenix Suns’ during the first round of the 1996 NBA Draft.

He played with the ‘Phoenix Suns’ for two years. After the 1998 NBA Draft, he went on to join the ‘Dallas Mavericks.’

For a brief period, his performance went down a little. Nash, who was a free agent after the 2003–04 season, signed with the ‘Phoenix Suns’ once again for the 2004–05 seasons.

Nash announced in July 2014 that the 2014–15 season would be his last. On 23 October, less than a week before the start of the 19th year for Nash in the NBA, he was ruled out for the season due to a recurring back injury.

On 21 March 2015, Nash announced his retirement from playing. The same year, it was confirmed that Nash would take on part-time consulting duties for the ‘Golden State Warriors.’

Nash landed the role of a senior advisor and was succeeded as general manager by Rowan Barrett, his former national teammate, on 5 March 2019.

Steve Nash was born in Johannesburg.

Who is Steve Nash? Everything You Need to Know