Moonshine is high-proof liquor that is produced illegally. The name was derived from a tradition of creating the alcohol during the nighttime, thereby avoiding detection. In recent years commercial producers increasingly label some of their products as "moonshine".

Moonshine is high-proof liquor that is produced illegally.The name was derived from a tradition of creating the alcohol during the nighttime, thereby avoiding detection.

In recent years commercial producers increasingly label some of their products as "moonshine". 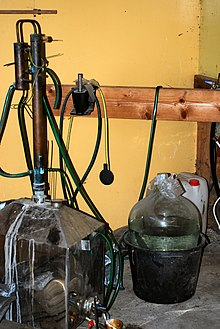 The ethanol may be concentrated in fermented beverages by means of freezing. For example, the name applejack derives from the traditional method of producing the drink, jacking, the process of freezing fermented cider and then removing the ice, increasing the alcohol content. Starting with the fermented juice, with an alcohol content of less than ten percent, the concentrated result can contain 25–40% alcohol.

In some countries, moonshine stills are illegal to sell, import, and own without permission. However, enthusiasts explain on internet forums how to obtain equipment and assemble it a still.To cut costs, stainless steel vessels are often replaced with plastic (e.g. polypropylene) vessels that can withstand heat, a concept of the plastic still. 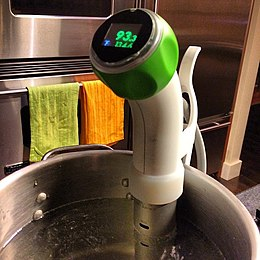 A column still, or a spiral still, can achieve a vapor alcohol content of 95% ABV.

Moonshine is usually distilled to 40% ABV, and seldom above 66% based on 48 samples.For example, a conventional pot stills commonly produce 40% ABV, and top out between 60 and 80% ABV after multiple distillations. However, ethanol can be dried to 95% ABV by heating 3A molecular sieves such as 3A zeolite.

The preferred heat source for plastic stills or spiral stills are sous vide sticks to control temperature, time, and circulation, and are therefore preferred over immersion heaters. Multiple units can be used to increase the wattage. Also, sous vides sticks, commonly sold in 1200w and generally temperature regulated up to 90 °C (ethanol boils at 78 °C), will evaporate the ethanol faster than an immersion heater, commonly sold in 300w. Electrical injury may occur if immersion heaters are modified; For example, if a 35 °C thermostat is removed from an aquarium heater because it may break their waterproofing, or if an immersion heater is disassembled from an electric water boiler.

A plastic still is a device for distillation specially adapted for separating ethanol and water.Plastic stills are common because they are cheap and easy to manufacture. The principle is that a smaller amount of liquid is placed in an open smaller vessel inside a larger one that is closed. A cheap 100w immersion heater is typically used as heat source, but a thermal immersion circulator, like a sous vide stick is ideal because it comes with a temperature controller. The liquid is kept heated at about 50 °C (122 °F) which slowly evaporates the ethanol to 40% ABV that condense on the inner walls of the outer vessel. The condensation that accumulates in the bottom of the vessel can then be diverted directly down through a filter containing activated carbon. The final product has approximately twice as much alcohol content as the starting liquid and can be distilled several times if stronger distillate is desired. The method is slow, and is not suitable for large-scale production.

A column still, also called a continuous still, patent still or Coffey still, is a variety of still consisting of two columns. A column still can achieve a vapor alcohol content of 95% ABV.

A spiral still is a type of column still with a simple slow air-cooled distillation apparatus, commonly used for bootlegging.Column and cooler consist of a 5-foot-long (1.5 m) copper tube wound in spiral form. The tube first goes up to act as a simple column, and then down to cool the product. Cookware usually consists of a 30-litre (6.6 imp gal; 7.9 US gal) wine bucket in pp plastic. The heat source is typically a thermal immersion circulator (commonly runs at 1200w), like a sous vide stick because it's hard to find 300w immersion heaters, and it's risky to disassemble the immersion heater from an electric water boiler because it may cause electrical injury. The spiral burner is popular because, despite its simple construction and low manufacturing cost, it can provide 95% ABV.

A pot still is a type of distillation apparatus or still used to distill flavored liquors such as whisky or cognac, but not rectified spirit because they are bad at separating congeners. Pot stills operate on a batch distillation basis (as opposed to a Coffey or column stills which operate on a continuous basis). Traditionally constructed from copper, pot stills are made in a range of shapes and sizes depending on quantity and style of spirit. Geographic variations in still design exist, with certain stills gaining popularity in regions of Appalachia.

Spirits distilled in pots is commonly 40% ABV, and top out between 60 and 80% after multiple distillations.

Poorly produced moonshine can be contaminated, mainly from materials used in the construction of the still. Stills employing automotive radiators as condensers are particularly dangerous; in some cases, glycol produced from antifreeze can be a problem. Radiators used as condensers could also contain lead at the connections to the plumbing. Using these methods often resulted in blindness or lead poisoning in those who consumed tainted liquor.[16] In Prohibition-era United States, many died from ingesting unhealthy substances with their moonshine. Consumption of lead-tainted moonshine is a serious risk factor for saturnine gout, a very painful but treatable medical condition that damages the kidneys and joints.

Although methanol is not produced in toxic amounts by fermentation of sugars from grain starches,contamination is still possible by unscrupulous distillers using cheap methanol to increase the apparent strength of the product. Moonshine can be made both more palatable and perhaps less dangerous by discarding the "foreshot" – the first 50ml - 150ml (1.5 oz - 5 oz) of alcohol that drip from the condenser. Because methanol vaporizes at a lower temperature than ethanol it is commonly believed that the foreshot contains most of the methanol, if any, from the mash. However, research shows this is not the case, and methanol is present until the very end of the distillation run. Despite this, distillers will usually collect the foreshots until the temperature of the still reaches 80 °C (176 °F). Additionally, the head that comes immediately after the foreshot typically contains small amounts of other undesirable compounds, such as acetone and various aldehydes.Fusel alcohols are other undesirable byproducts of fermentation that are contained in the "aftershot", and are also typically discarded.

Alcohol concentrations at higher strengths (the GHS identifies concentrations above 24% ABV as dangerous) are flammable and therefore dangerous to handle. This is especially true during the distilling process when vaporized alcohol may accumulate in the air to dangerous concentrations if adequate ventilation is not provided.

The incidence of impure moonshine has been documented to significantly increase the risk of renal disease among those who regularly consume it, primarily from increased lead content.

Outbreaks of methanol poisoning have occurred when methanol is used to adulterate moonshine. 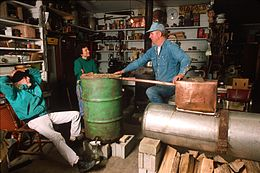 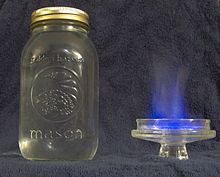 A common folk test for the quality of moonshine was to pour a small quantity of it into a spoon and set it on fire. The theory was that a safe distillate burns with a blue flame, but a tainted distillate burns with a yellow flame. Practitioners of this simple test also held that if a radiator coil had been used as a condenser, then there would be lead in the distillate, which would give a reddish flame. This led to the mnemonic, "Lead burns red and makes you dead." or "Red means dead."

Other toxic components, such as methanol, cannot be detected with a simple burn test, as methanol flames are also blue and difficult to see in daylight.

Manufacturing of spirits through distilling, fractional crystallization, etc, outside a registered distillery is illegal in many countries. A home-made alcoholic beverage that is legal to produce and consume in many countries is fermented water whose ethanol fermentation is exclusively based on sugar, yeast, and water.

Moonshine historically referred to "clear, unaged whiskey",once made with barley in Scotland and Ireland or corn mash in the United States,though sugar became just as common in illicit liquor during the last century. The word originated in the British Isles as a result of excise laws, but only became meaningful in the United States after a tax passed during the Civil War outlawing non-registered stills. Illegal distilling accelerated during the Prohibition era (1920-1933) which mandated a total ban on alcohol production under the Eighteenth Amendment of the Constitution. Since the amendment's repeal in 1933, laws focus on evasion of taxation on any type of spirits or intoxicating liquors. Applicable laws were historically enforced by the Bureau of Alcohol, Tobacco, Firearms and Explosives of the US Department of Justice, but are now usually handled by state agencies. Enforcement agents were once known colloquially as "revenuers". 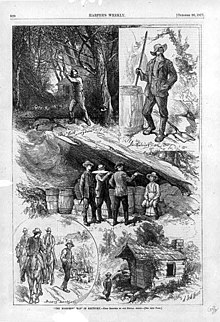 The earliest known instance of the term "moonshine" being used to refer to illicit alcohol dates to the 1785 edition of Grose's Dictionary of the Vulgar Tongue, which was published in England. Prior to that, "moonshine" referred to anything "illusory" or to literally the light of the moon.The U.S. Government considers the word a "fanciful term" and does not regulate its use on the labels of commercial products, as such, legal moonshines may be any type of spirit, which must be indicated elsewhere on the label. 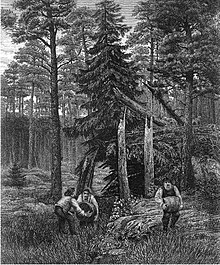 Prohibition in the United States

In Prohibition-era United States, moonshine distillation was done at night to avoid discovery. While moonshiners were present in urban and rural areas around the United States after the civil war, moonshine production concentrated in Appalachia because the limited road network made it easy to evade revenue officers and because it was difficult and expensive to transport corn crops. As a study of farmers in Cocke County, Tennessee, observes: "One could transport much more value in corn if it was first converted to whiskey. One horse could haul ten times more value on its back in whiskey than in corn."Moonshiners in Harlan County, Kentucky, like Maggie Bailey, sold moonshine in order to provide for their families. Others, like Amos Owens from Rutherford County, North Carolina and Marvin "Popcorn" Sutton from Maggie Valley, North Carolina, sold moonshine in nearby areas. Sutton's life was covered in a documentary on the Discovery Channel called "Moonshiners". The bootlegger once said that the malt (a combination of corn, barley, rye) is what makes the basic moonshine recipe work. In modern usage, the term "moonshine" still implies the liquor is produced illegally, and the term is sometimes used on the labels of legal products to market them as providing a forbidden drinking experience.

Once the liquor was distilled, drivers called "runners" or "bootleggers" smuggled moonshine and "bootleg" (illegally imported) liquor across the region in cars specially modified for speed and load-carrying capacity. The cars were ordinary on the outside but modified with souped-up engines, extra interior room, and heavy-duty shock absorbers to support the weight of the illicit alcohol. After Prohibition ended, the out-of-work driver kept their skills sharp through organized races, which led to the formation of the National Association fr Stock Car Auto Racing (NASCAR).Several former "runners" became noted drivers in the sport.

Moonshine Still Ghost from the past