Who is Zinedine Zidane?

Talk about the talismans in the soccer world and the list would be incomplete without mentioning the name of the much skilled and talented Zinedine Zidane. A magnificent professional, Zidane is one of the greatest players in the history of football. A master at the fundamentals and techniques of the game, Zidane is known for his great control and dribbling skills, in addition to his magic touch, focused vision, and great leadership traits. During his playing years, he was one of the best players when it came to receiving and controlling the ball. In his 108 international outings, he scored 31 goals. Zidane’s passion for the game started when he was young. Back then, little did people known that he would create history in the soccer world with his amazing talent and prowess. He had an amazing career graph with a win each at the ‘FIFA World Cup’ (1998) and ‘Euro’ (2000), playing for France. During his time as a player, he was the most prominent player for France. For his excellence, Zidane has been bestowed with many coveted awards and honors, including the ‘FIFA World Player of the Year’ and ‘Ballon D'Or.’ He was awarded the 2006 ‘FIFA World Cup Golden Ball’ on his retirement for his outstanding contribution to the game. 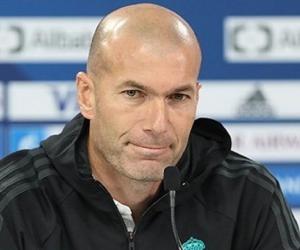 In 1991, he scored his first goal against ‘Nantes,’ securing his team a 2-1 win. With Zidane by its side, the club went on to earn its first ever European football berth by qualifying for the ‘UEFA Cup’ after finishing fourth in the league. It was the club’s highest finish in the top flight.

On the field, Zidane, along with Bixente Lizarazu and Christophe Dugarry, came up with a set of midfield combinations which went on to become a trademark for ‘Bordeaux’ and the 1998 French national team.

In 1996, Zidane moved to ‘UEFA Champions League’ winners ‘Juventus’ for a whopping £3.2 million. ‘Juventus’ not only recorded a win in the 1996-97 ‘Serie A,’ but also brought home the ‘Intercontinental Cup.’

The year 1998 was a successful one for Zidane who held the record for scoring seven goals in 32 matches. His club not only won the 1997-98 ‘Serie A,’ but retained the ‘Scudetto’ as well. ‘Juventus’ made it to the ‘UEFA Champions League’ final for the third time, but lost to ‘Real Madrid.’

Zidane joined ‘Real Madrid’ in the year 2001 for a then world record fee of 150 billion Italian lire. The investment was worth it as Zidane helped ‘Real Madrid’ gain convincing wins during his four-year contract. He scored the famous match-winning goal, a volley hit with his weaker foot, in Madrid's 2–1 win over ‘Bayer Leverkusen’ in the 2002 ‘UEFA Champions League’ final.

In the following seasons, Zidane won the 2002–03 ‘La Liga’ for ‘Real Madrid.’ Subsequently, he was honored with many awards for his outstanding performance.