In the 1970s, several experimental models of hatchback and two-door sedan were created in the USSR.

ZAZ-1102 Tavria, a 3-door hatchback released in 1987, was the first model of the range. It features independent MacPherson struts suspension at the front and a twist-beam rear suspension. The water-cooled MeMZ-245 I4 engine was a major shift forward from the air-cooled V4 used in former models.

The 1102 acquired the Tavria name in 1989. It was chosen in an internal factory contest and resembles Tauric, the ancient Greek name of Crimea.

ZAZ-1102 "Tavria" became the basis for a whole line of cars, which are both directly modifications of the base model (more than 40 different variants), and independent models on its platform, such as: "five-door liftback" ZAZ-1103 "Slavuta", "Five-door station wagon" ZAZ-1105 "Dana" and commercial pickup truck ZAZ-11055 "Pick-Up".

ZAZ-1102 Tavria Nova production started in 1999. "Tavria Nova" is a modification created jointly with Daewoo, aimed at eliminating the identified deficiencies and improving technical and operational indicators. A cosmetic modernization of the radiator grille, headlights and taillights was carried out, as well as new decorative caps on 4.5J wheel rims with tubeless tires began to be used, a third brake light was installed on the rear door. To improve the reliability of the car and increase the level of passive safety, the load-bearing and technological elements of the body were reinforced, which made it possible to reduce the noise level in the cabin.

In 2006 and 2007, the plant's management announced several times about the imminent withdrawal of the model from production. The mass production of the ZAZ-1102 "Tavria" hatchback model was completed in 2007, although at least two more batches were assembled in 2008 and 2009.

ZAZ-1103 Slavuta was a 5-door B-class liftback released in 1995 and discontinued in 2011. It featured a fuel injection engine of 1,2-1,3 liters. Due to the use of a liftback type body with an elongated roof line and rounded contours of hood and trunk lid, the movement of turn indicators onto the headlamp assemblies (increased rounding radius from 20 to 50 mm) and the removal of rain gutters from above the doors, not only was a completely new shape of created, but also the aerodynamics were improved, the luggage compartment volume increased, the loading height lowered (by 60 cm), and the dirtying of the rear glass in rainy weather was decreased. When ZAZ started the production of Chevrolet Lanos, some design elements of Chevrolet Lanos (such as seat and door parts) were added to Slavuta.

During the period of production more than 140 000 cars were produced. In January 2011 the last car of ZAZ-1103 "Slavuta" model was produced by ZAZ line, and it was sold during an online auction on February 11, 2011, for 47,020 hryvnias. ZAZ Forza became the direct descendant of Slavuta on the line. ZAZ-Slavuta and ZAZ-Tavria family were the last wholly Ukrainian cars.

In 2004 the Slavuta was awarded zero stars out of a possible four by the Russian ARCAP safety assessment program. 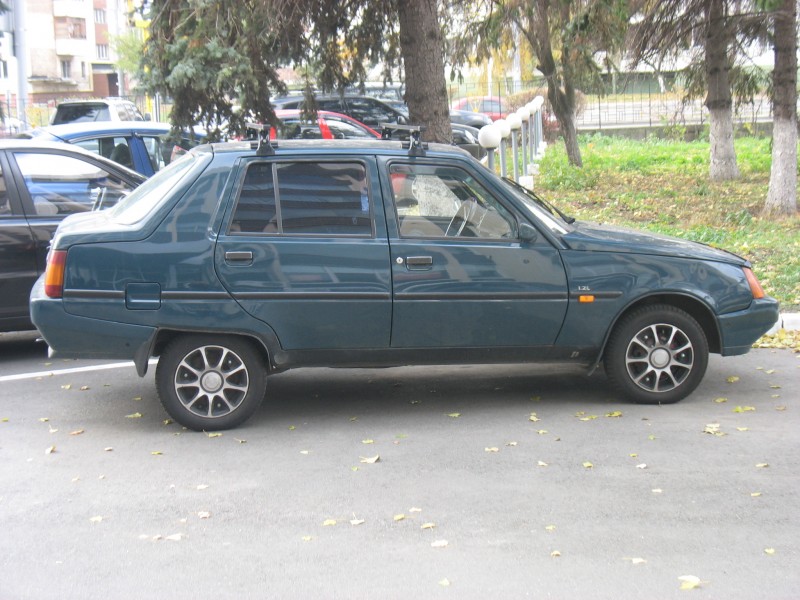