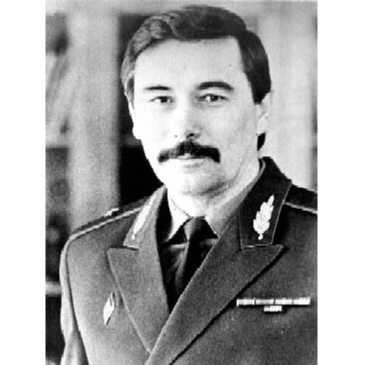 He served his military service in the Baltic Fleet.

Participated in the last congress of the CPSU. He was in the team of Alexander Lukashenko during the 1994 presidential elections.

On October 16, 1995, by Decree of President Lukashenko No. 424, he was dismissed from the post of Minister of Internal Affairs. Prior to that, the media wrote about the minister's conflict with the head of the Presidential Affairs Department, Ivan Titenkov[2].

On April 16, 1996, by Presidential Decree No. 149, Lukashenka was demoted to the rank of police colonel and dismissed from the Ministry of Internal Affairs for gross financial violations and omissions in work.

In February 1998, he joined the National Executive Committee, created by the opposition, Chairman of the Security Committee. He was a member of the National Committee of the UCP.

He went missing on May 7, 1999. According to the official version, it happened in the evening near Zhukovsky Street in Minsk, when Yuri Zakharenko was abducted with violence by unidentified persons and taken away in a passenger car in an unknown direction. Upon the disappearance of the ex-Minister of Internal Affairs, a criminal case was initiated on September 17, 1999 on the grounds of a crime under article 101 of the Criminal Code of the Republic of Belarus ("Premeditated murder", as amended in 1960).

Demonstration in Warsaw in memory of the disappeared people in Belarus

According to former GRU Colonel Vladimir Borodach, Zakharenko "captured the Lukashenkovsky death squadron, he was subjected to severe torture, beaten, and used psychotropic special means. The general was beaten out of a confession allegedly about the preparation of a coup d'etat. Realizing that he would not confirm his testimony in court, he was shot."

In his interview for Radio Liberty, V. Borodach said that he managed to get on the trail of the crime. He allegedly met with the head of the crematorium of the Northern Cemetery, who, on the orders of people from the special services, illegally burned Zakharenko's body. Later, someone attacked the head of the crematorium, beat him, doused him with gasoline and burned him. After this attack, Colonel Borodach was warned by people from the special services, and he decided to leave Belarus. Now the bearded man lives in forced emigration in Germany.

Nikolay Cherginets is sure that Zakharenko was killed, but Lukashenka is not involved in this.

In 2020, a former SOBR fighter Garavsky told about the circumstances of Zakharenko's murder.

In 2010, in an interview with American professor Grigory Ioffe, as well as in 2019 in an interview with A. Venediktov, A. Lukashenko said that Yu. Zakharenko, being a minister, borrowed a large sum of money in Ukraine, which he did not return. He also noted that five years after Zakharenko's disappearance, he was photographed in Germany and the photo was published in a German newspaper. After that, the Ministry of Foreign Affairs of the Republic of Belarus sent a request to Germany, to which no response was received. Volchek, the head of the human rights center "Legal Aid to the population", a representative of the Zakharenko family, said that Yu. Zakharenko had no business in Ukraine.

Mother - Ulyana Grigoryevna (died in 2018 at the 95th year of life), there was a brother Vladimir. Wife Olga, daughters Elena and Julia, grandson Kirill was born on November 3, 1998, and the second grandson Denis was born in 2009.

July 28, 1994 - Minister of Internal Affairs of the Republic of Belarus

October 16, 1995 - dismissed from the post of Minister of Internal Affairs of the Republic of Belarus

On April 16 , 1996 , he was demoted to the special rank of colonel and dismissed from the Ministry of Internal Affairs

"Created via: Web app"
Иван Самохвалов created this topic on 7 Feb, 2022
Edits made to:
Infobox (+2 properties)