A Xenobot is made of living heart and skin cells from Xenopus laevis and is considered both an organism and a programmable machine.

Xenobots consist of contracting heart cells and skin cells from the African clawed frog Xenopus laevis. The organisms were put together for the purpose of studying cellular communication and the correlation between cell arrangement and behavior. A xenobot is both a living thing made of living cells and a machine that is programmable based on cell arrangement. Xenobots were reported in PNAS in 2020 by researchers in the Department of Computer Science at University of Vermont and the Biology Department at Tufts University.

To construct xenobots, heart and skin cells were derived from stem cells that were harvested from Xenopus embryos. Data about the shape of each xenobot and how it mapped to behavior was analysed by computer scientists, who generated a simulated environment for digital versions of the xenobots. Evolutionary algorithms, which replicate aspects of natural selection, were used to search for designs that might affect functionality. Digital xenobots that did well at a certain task in the simulation were “bred” with others that did well to produce a next generation of xenobots. The system uses AI methods to design candidate lifeforms for desired functions. The designs that were successful in the simulation were built out of cells and tested. The research involved back and forth collaboration between the xenobots made from actual cells and digital xenobots and a scalable pipeline for creating functional novel lifeforms was presented in the paper. 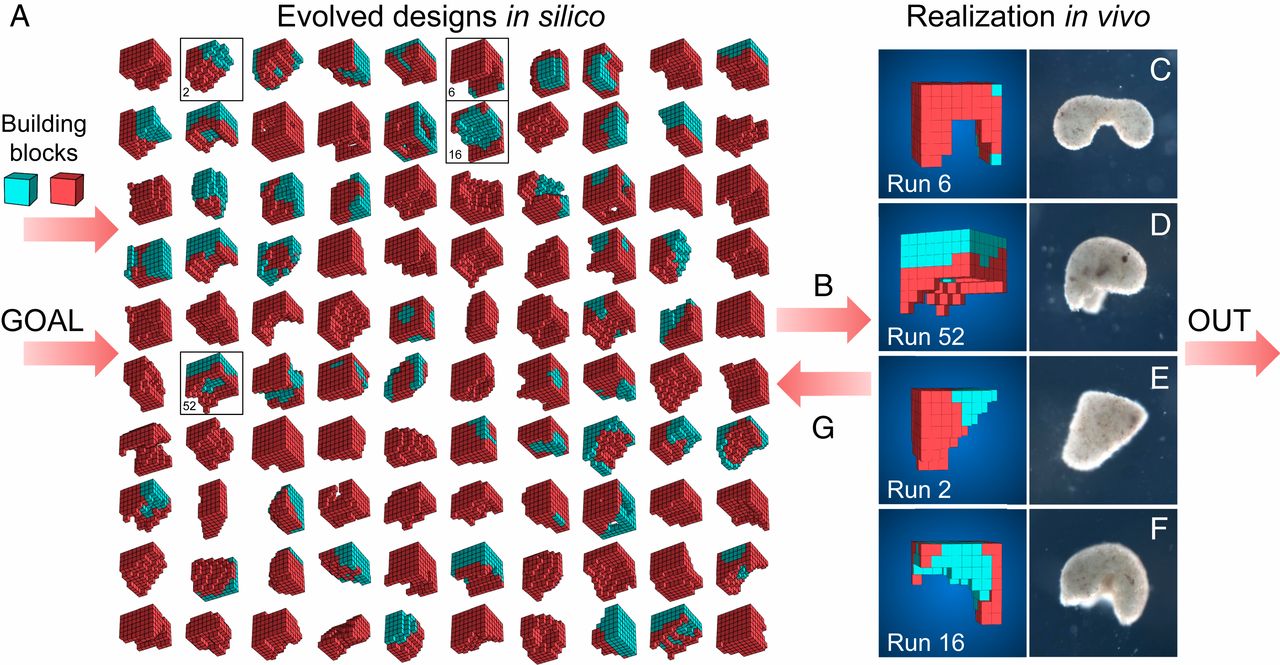 Behavior exhibited by the xenobots include changing their movement, herding loose cells into piles and pulling itself back together if sliced. Movement resulted from contractile cardiac muscle. Since movements produced by cilia were not modeled in silico, cilia movements were suppressed in vivo by microinjection of the gene transcript for Notch intracellular domain (Notch ICD). The simulation could be used to evolve certain desired behaviors. Some designs evolved a hole in the centre of their transverse plane which reduced hydrodynamic drag. This lead to the incorporation of a pouch as a design constraint for the transport of objects. Object transport was evolved in silico. Cardiomyocyte temporal coordination was modeled as random noise. Selection pressure for locomotion lead to the evolutionary improvement in shape and distribution of the passive skin cells and contractive cardiac muscle cells. The global movement produced by random actuation was derandomized.

Xenobots have applications in the construction of robots using living tissues and other living machines that could function in drug delivery inside the body or environmental remediation. Bioengineering, tissue engineering, synthetic organoids and single-cell organisms have been used design living systems but they do not allow the discovery of novel forms through automatic design. Reconfigurable organisms such as xenobots could serve as model systems for research on the evolution of multicellularity, exobiology, artificial life, basal cognition and regenerative medicine.