Wisper (Wisp2 super-enhancer-associated RNA) is a long non-coding RNA (lncRNA) with regulatory roles in cardiac fibroblasts and is a potential therapeutic target for the reduction of cardiac fibrosis.

Wisper is a cardiac fibroblast-enriched lncRNA that is upregulated after acute myocardial infarction (AMI) in mice and patients with aortic stenosis. Both of these diseases trigger cardiac fibrosis and left ventricular (LV) dysfunction. The expression of WISPER correlates with the extent of cardiac fibrosis in humans and silencing of Wisper in mice decreases the expression of pro-fibrotic genes Col1a3 and Tgfb2 in cardiac but not lung fibroblasts. Induction of Wisper boosts the expression of these genes. Mice which were treated with a modified antisense oligonucleotides (ASOs) molecule called GapmeRs that depletes Wisper after AMI developed less cardiac fibrosis and showed improved conservation of their LV function. Wisper acts by binding TIA1-related protein (TIAR) and retaining it in the nucleus, guiding it to bind to and promote processing of lysil hydroxylase 2 mRNA which is a mediator of collagen crosslinking.

Wisper (Wisp2 super-enhancer–associated RNA) was first identified by a research team led by Samir Ounzain and Thierry Pedrazzini at the University of Lausanne Medical School in research looking to identify therapeutic targets for fibrosis in the heart. Wisper is a cardiac fibroblast-enriched lncRNA identified in transcriptomic and epigenomic data sets. The authors pursued lncRNAs associated with cardiac fibroblast (CF)-specific enhancers due to their potential to modulate CF behavior. Enhancers are elements that enhance gene expression by binding activator proteins. Super enhancers (SEs) are large enhancer clusters that assemble together and exhibit cell/tissue specificity and appear to be crucial for maintaining cell identity. Active enhancers are transcribed into ncRNAs with SEs producing more RNAs than typical enhancers. Enhancer-associate lncRNAs are involved in trapping transcription factors on DNA, modifying the local chromatin environment and organizing nuclear three-dimensional topologies or the activation of target gene programs.

The SE from which Wisper was identified overlaps with the proximal gene Wisp2 in mouse and human. Wisper is distributed in the nucleus and cytoplasm. In mice Wisper was maximally expressed at a time period after myocardial infarction (MI) that corresponds to the proliferative phase when myofibroblasts migrate to the boarder zone and secrete collagen and other extracellular matrix components. Wisper depletion in mice lead to a global transcriptional reprogramming of gene networks controlling proliferation, migration, apoptosis and differentiation in cardiac fibroblasts. Depletion of Wisper also resulted in reduction of TIAR-bound Plod2 (lysyl hydroxylase 2) and a dose dependent decrease in the number of fibroblasts with nuclear TIAR staining. The treated cells showed TIAR was retained in the cytoplasm. 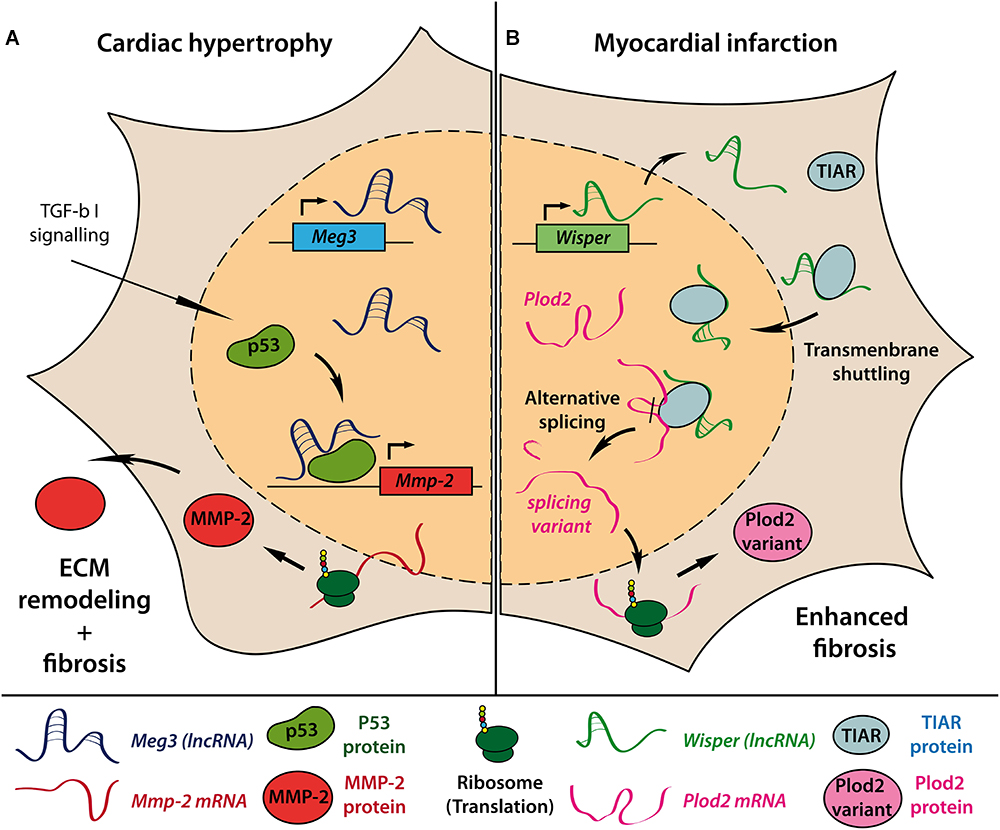 The above figure from Lisa Hobuß, Christian Bär and Thomas Thum (2019) depicts Whisper being upregulated in cardiac fibroblasts upon myocardial infarction. In the presence of Wisper, TIAR shuttles from the cytoplasm to the nucleus to interfere with RNA processing and induces alternative splicing of Plod2 mRNA. The alternative Plod2 protein variant causes enhanced fibrosis.

When lncRNAs are classified based on their mechanism of action, Wisper falls into the Guide lncRNA group. Guide lncRNAs bind to a transcription factor or chromatin modifier and carry it to the target promoter to affect the expression of a certain gene. Guide lncRNAs can work on neighbouring genes (in cis) or on distant genes (in trans).

In mice depletion of Wisper with GapmeRs prior to MI attenuated pathological fibrosis and remodelling but also negatively affected the acute wound healing process causing cardiac rupture and increased mortality. The authors suggest that a therapeutic protocol where GapmeRs is administered 2 days after infarction could prevent the detrimental effects on acute wound healing while still decreasing the pathological fibrosis.

Wisper is identified as a cardiac fibroblast-enriched super-enhancer-associated lncRNA in mice and humans. Results from Wisper depletion approaches in mouse suggest that it is an attractive therapeutic target to reducing pathological cardiac fibrosis in response to myocardial infarction and prevent adverse remodeling in the damaged heart.

Long Non-coding RNAs: At the Heart of Cardiac Dysfunction?