The Whirlpool's most striking feature is its two curving arms, a hallmark of so-called grand-design spiral galaxies. Many spiral galaxies possess numerous, loosely shaped arms that make their spiral structure less pronounced. These arms serve an important purpose in spiral galaxies. They are star-formation factories, compressing hydrogen gas and cr

The Whirlpool Galaxy Galaxy (M51), is an interacting grand-design spiral galaxy in the constellation Canes Venatici. It is estimated to be 23-million light-years away.

The Whirlpool Galaxy is located at the coordinates RA 13h 29m 53s | Dec +47° 11′ 43″. It can be spotted in a pair of binoculars by moving from the bright star Alkaid in Ursa Major, towards Cor Caroli in Canes Venatici.

Messier 51 is a northern hemisphere deep-sky object that is bright enough to observe in amateur telescopes. It is a popular choice for amateur astrophotographers during

The Whirlpool Galaxy is estimated to be about 400-million years old. It was observed and cataloged by famous astronomer Charles Messier in 1773 as Messier 51 (M51). It eventually earned the nickname “The Whirlpool” because it resembles a vortex in the water.

M51’s companion galaxy (NGC 5195) is clearly visible in photographs, and even detectable through the telescope eyepiece (with enough aperture). The Whirlpool has a supermassive black hole at its heart, thanks to the merging of M51 with its neighboring galaxy, NGC 5195.

The Whirlpool Galaxy’s fascinating structure gives astronomers a better understanding of how galaxies interact with each other and how stars form within them. This article by NASA discusses how the Chandra X-ray Observatory discovered a black hole “burping” at the center of the Whirlpool’s companion galaxy.The Whirlpool Galaxy has been highly studied and observed by professional astronomers for many years. M51 was originally thought to be “a spiral nebula” until Edwin Hubble was able to identify Cepheid variable stars in some of these spiral nebulae.

This provided evidence that these stars were so far away that they must be entirely separate galaxies.

Distance to Earth: About 23 million light-years

The Whirlpool Galaxy is an extremely satisfying astrophotography target due to its high surface brightness and impressively detailed spiral arm structure. As seen in this APOD image, there is also a subtle glow around the galaxy that is best enjoyed through long-exposure photography.

Through a telescope eyepiece, M51 is rather faint and fuzzy, although some of its structure can be observed under dark, moonless skies with enough aperture. The star chart below shows the location of the Whirlpool Galaxy in the night sky. 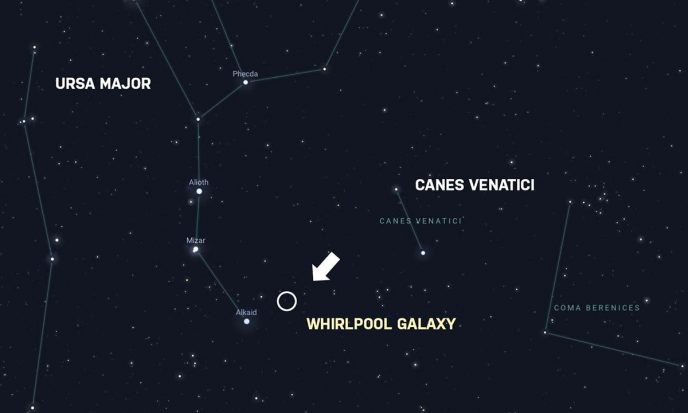 See the Whirlpool Galaxy Through the Eyes of NASA's 'Great Observatories'

Title
Author
Date
Publisher
Description
'Straight from a sci-fi movie': Nasa's Whirlpool Galaxy sonification wows people
April 9, 2021
Hindustan Times
The space agency shared that they used data from several NASA telescopes, including Hubble, in this sonification of the Whirlpool Galaxy.
A New Map of the Milky Way
Mark J. Reid
March 17, 2020
Scientific American
Scientific American is the essential guide to the most awe-inspiring advances in science and technology, explaining how they change our understanding of the world and shape our lives.
esahubble.org/images/opo0110a/