Wife of edward viii of the united kingdom

Vanity Fair's The Best-Dressed Women of All Time: Wallis Simpson

The Duchess of Windsor.

Wallis in Love: The Untold Life of the Duchess of Windsor, the Woman Who Changed the Monarchy.

Noblesse Oblige: The Duchess of Windsor As I Knew Her.

The Last of the Duchess.

Before, during, and after the Second World War, the Duke and Duchess of Windsor were suspected by many in government and society of being Nazi sympathizers. In 1937, they visited Germany and met Adolf Hitler. In 1940, the Duke was appointed governor of the Bahamas, and the couple moved to the islands until he relinquished the office in 1945. In the 1950s and 1960s, the Duke and Duchess shuttled between Europe and the United States, living a life of leisure as society celebrities. After the Duke's death in 1972, the Duchess lived in seclusion and was rarely seen in public. Her private life has been a source of much speculation, and she remains a controversial figure in British history.

The King's desire to marry a woman who had two living ex-husbands threatened to cause a constitutional crisis in the United Kingdom and the Dominions, ultimately leading to his abdication in December 1936 to marry "the woman I love".[2] After abdicating, the former king was made Duke of Windsor by his brother and successor, King George VI. Wallis married Edward six months later, after which she was formally known as the Duchess of Windsor, but was not allowed to share her husband's style of "Royal Highness".

Wallis, Duchess of Windsor (born Bessie Wallis Warfield; June 19, 1896 – April 24, 1986), known as Wallis Simpson, was an American socialite and wife of the Duke of Windsor, the former King-Emperor Edward VIII. Their intention to marry and her status as a divorcée caused a constitutional crisis that led to Edward's abdication.

Wallis grew up in Baltimore, Maryland. Her father died shortly after her birth, and she and her widowed mother were partly supported by their wealthier relatives. Her first marriage, to United States Navy officer Win Spencer, was punctuated by periods of separation and eventually ended in divorce. In 1931, during her second marriage, to Ernest Simpson, she met Edward, the then Prince of Wales. Five years later, after Edward's accession as King of the United Kingdom, Wallis divorced her second husband to marry Edward. 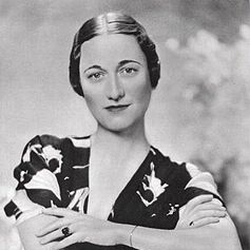 Wife of edward viii of the united kingdom