The period of european history characterised by viking raids and trading

The Viking Age (793–1066 CE) was the period during the Middle Ages when Norsemen known as Vikings undertook large-scale raiding, colonizing, conquest, and trading throughout Europe, and reached North America. It followed the Migration Period and the Germanic Iron Age. The Viking Age applies not only to their homeland of Scandinavia, but to any place significantly settled by Scandinavians during the period. The Scandinavians of the Viking Age are often referred to as Vikings as well as Norsemen, although few of them were Vikings in the technical sense.

Voyaging by sea from their homelands in Denmark, Norway and Sweden, the Norse people settled in the British Isles, Ireland, the Faroe Islands, Iceland, Greenland, Normandy, the Baltic coast, and along the Dnieper and Volga trade routes in eastern Europe, where they were also known as Varangians. They also briefly settled in Newfoundland, becoming the first Europeans to reach North America. The Norse-Gaels, Normans, Rus' people, Faroese and Icelanders emerged from these Norse colonies. The Vikings founded several kingdoms and earldoms in Europe: the kingdom of the Isles (Suðreyjar), Orkney (Norðreyjar), York (Jórvík) and the Danelaw (Danalǫg), Dublin (Dyflin), Normandy, and Kievan Rus' (Garðaríki). The Norse homelands were also unified into larger kingdoms during the Viking Age, and the short-lived North Sea Empire included large swathes of Scandinavia and Britain. In 1021, the Vikings achieved the feat of reaching North America- the date of which was not specified until exactly a millennium later.

Several things drove this expansion. The Vikings were drawn by the growth of wealthy towns and monasteries overseas, and weak kingdoms. They may also have been pushed to leave their homeland by overpopulation, lack of good farmland, and political strife arising from the unification of Norway. The aggressive expansion of the Carolingian Empire and forced conversion of the neighboring Saxons to Christianity may also have been a factor. Sailing innovations had allowed the Vikings to sail further and longer to begin with.

Information about the Viking Age is drawn largely from primary sources written by those the Vikings encountered, as well as archaeology, supplemented with secondary sources such as the Icelandic Sagas. 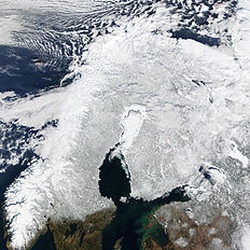 The period of european history characterised by viking raids and trading