azgen Zaveni Sargsyan was an Armenian military commander and politician. He was the first Defence Minister of Armenia from 1991 to 1992 and then from 1995 to 1999. He served as Armenia's Prime Minister from 11 June 1999 until his assassination on 27 October of that year. He rose to prominence during the mass movement for the unification of Nagorno-Karabakh with Armenia in the late 1980s and led Armenian volunteer groups during the early clashes with Azerbaijani forces. Appointed defence minister by President Levon Ter-Petrosyan soon after Armenia's independence from the Soviet Union in late 1991, Sargsyan became the most prominent commander of Armenian forces during the First Nagorno-Karabakh War. In different positions, he regulated the military operations in the war area until 1994, when a ceasefire was reached ending the war with Armenian forces controlling almost all of Nagorno-Karabakh and seven surrounding districts.

In the post-war years, Sargsyan tightened his grip on the Armed Forces of Armenia, establishing himself as a virtual strongman. After strongly supporting Ter-Petrosyan to retain power in 1996, he forced the president out of office in 1998 due to the latter's support for concessions in the Nagorno-Karabakh settlement negotiations, and helped Prime Minister Robert Kocharyan to be elected president. After his relations with Kocharyan deteriorated, Sargsyan merged the influential war veterans group Yerkrapah into the Republican Party and joined forces with Armenia's ex-communist leader Karen Demirchyan. In the May 1999 elections, their reform-minded alliance secured a comfortable majority in the National Assembly. Sargsyan became prime minister, emerging as the de facto decision-maker in Armenia with effective control of the military and the legislature.

Sargsyan, along with Demirchyan and several others, was assassinated in the Armenian parliament shooting of 27 October 1999. The perpetrators were sentenced to life in prison. However, the distrust toward the trial process gave birth to a number of conspiracy theories. Some experts and politicians argue that their assassination was masterminded by Kocharyan and National Security Minister Serzh Sargsyan. Others have suspected the possible involvement of foreign powers in the shooting.

Despite his mixed legacy, Sargsyan is now widely recognized as a national hero across the political spectrum and by the public. Given the honorific Sparapet, he made significant contributions to the establishment of Armenia as independent state and ensuring its security as the founder of the Armenian Army. He has also been criticized by human rights organizations for being undemocratic, especially for his role in elections. Sargsyan was awarded the highest titles of Armenia and Nagorno-Karabakh—National Hero of Armenia and Hero of Artsakh. 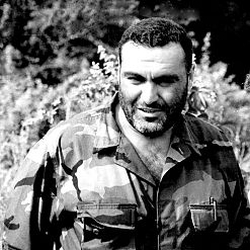