Silvia Vanessa Ponce de León Sánchez (born 7 March 1992), known simply as Vanessa Ponce, is a Mexican model and beauty queen who was crowned Miss World 2018. She is the first Mexican to be crowned as Miss World. In the history of the Miss World competition, she holds the record for being the oldest winner thus far.

She speaks basic English, in addition to her mother tongue Spanish.

During the Miss World 2018 competition, she promoted her project called "Na Vili", whose objective is to help the children of the indigenous Mexican day laborers who emigrated from the State of Guerrero, Mexico to the State of Guanajuato. She also works in a school called Nenemi dedicated to the intercultural education for indigenous people.

At the age of 22, she participated in the fifth season of Mexico's Next Top Model, which ran in 2014. At the end of the reality show, she was eventually declared as the winner. Her prize package included a cash prize of Mex$300,000, an appearance at the New York Fashion Week, $50,000 worth of Mary Kay cosmetics, a modeling contract with Queta Rojas management, a Volkswagen Tiguan, $125,000 worth of Tommy Hilfiger apparel and an editorial spread in Glamour magazine. 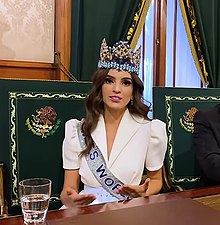 She represented Mexico at the 68th edition of Miss World. During the final question and answer round of the contest, she was asked - “How would you use your influence as Miss World to help others?” she replied by stating:

“I would use my position just as I have been doing for the past three years, by being an example. We all can be an example of good in the world. We all have to care, we all have to love and we all have to be kind. It doesn't cost a thing and helping is not that hard. You just have to go out there and there will always be someone who needs what you have to offer. So, help anyone you can guys.”

At the end of the event, she won the title and was crowned Miss World 2018, on 8 December 2018 in the city of Sanya, China. She was crowned by the outgoing titleholder, Manushi Chhillar of India.

Vanessa Ponce de Leon is the oldest Miss World as of now. She won the contest when she was 26 years and 276 days, surpassing the previous record of Miss World 1989, Aneta Kręglicka, who was 24 years old and 244 days old at the time of her victory

During her reign as Miss World, she lived in England and visited China, Thailand, Indonesia, India, Uganda, the Philippines, Ghana, Singapore, Poland, Tanzania, the Bahamas and various cities in her home country Mexico.

At the end of her reign, Ponce crowned her successor Toni-Ann Singh of Jamaica as Miss World 2019 in London on 14 December 2019.

On 19th August 2019, she gave an interview in Women Fitness about her exercise routine, diet, workout, skincare and hair care, under the title 'Miss World Vanessa Ponce de León: An Unmatched Beauty