"update inverses"
Golden AI edited on 26 May, 2022
Edits made to:
Infobox (+1 properties)
Infobox
Member of Board of Directors of

Thomas Edward Patrick Brady Jr. (born August 3, 1977) is a former American football quarterback who played in the National Football League (NFL) for 22 seasons. He spent his first 20 seasons with the New England Patriots, where he was a central contributor to the franchise's dynasty from 2001 to 2019. In his final two seasons, he was a member of the Tampa Bay Buccaneers. Brady is widely regarded as the greatest quarterback of all time.

After playing college football at Michigan, Brady was selected 199th overall by the Patriots in the sixth round of the 2000 NFL Draft, later earning him a reputation as the NFL's biggest draft steal. He became the starting quarterback during his second season, which saw the Patriots win their first Super Bowl title in Super Bowl XXXVI. As the team's primary starter for 18 seasons,[a] Brady led the Patriots to 17 division titles (including 11 consecutive from 2009 to 2019), 13 AFC Championship Games (including eight consecutive from 2011 to 2018), nine Super Bowl appearances, and six Super Bowl titles, all NFL records for a player and franchise. He joined the Buccaneers in 2020 and led them to win Super Bowl LV, extending his individual records to 10 Super Bowl appearances and seven victories. 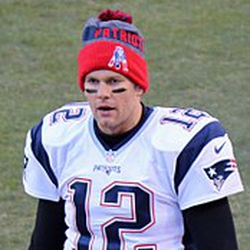