In the mid-1960s, Nhất Hạnh co-founded the School of Youth for Social Services and created the Order of Interbeing. He was exiled from Vietnam in 1966 after expressing opposition to the war. In 1967, Martin Luther King Jr. nominated him for a Nobel Peace Prize.

Nhất Hạnh established dozens of monasteries and practice centers and spent many years living at the Plum Village Monastery, which he founded in 1982 in southwest France near Thénac, travelling internationally to give retreats and talks. Nhất Hạnh promoted deep listening as a nonviolent solution to conflict and sought to raise awareness of the interconnectedness of all elements in nature. He coined the term "engaged Buddhism" in his book Vietnam: Lotus in a Sea of Fire. 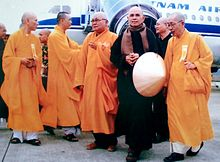 Nhất Hạnh combined a variety of teachings of Early Buddhism, Mahayana Buddhist traditions of Yogācāra and Zen, and ideas from Western psychology to teach mindfulness of breathing and the four foundations of mindfulness, offering a modern perspective on meditation practice. His presentation of the Prajnaparamita in terms of "interbeing" has doctrinal antecedents in the Huayan school of thought, which "is often said to provide a philosophical foundation" for Zen

Nhất Hạnh completed new English and Vietnamese translations of the Heart Sutra in September 2014. In a letter to his students, he said he wrote these new translations because he thought that poor word choices in the original text had resulted in significant misunderstandings of these teachings for almost 2,000 years.

Nhất Hạnh has also been a leader in the Engaged Buddhism movement (he is credited with coining the term), promoting the individual's active role in creating change. He rephrased the five precepts for lay Buddhists, which were traditionally written in terms of refraining from negative activities, as committing to taking positive action to prevent or minimize others' negative actions. For example, instead of merely refraining from stealing, Nhất Hạnh wrote, "prevent others from profiting from human suffering or the suffering of other species on Earth" by, for example, taking action against unfair practices or unsafe workplaces. He credited the 13th-century Vietnamese Emperor Trần Nhân Tông with originating the concept. Trần Nhân Tông abdicated his throne to become a monk and founded the Vietnamese Buddhist school of the Bamboo Forest tradition

Thích Nhất Hạnh was born in Socialist Republic of Vietnam.

Village Ventures
Known for
Engaged Buddhism, father of the mindfulness movement
Educated at