A class of wearable robots that augment their users by providing them with an additional set of robotic limbs, which can be controlled independently from the natural limbs.

A class of wearable robots that augment their users by providing them with an additional set of robotic limbs, which can be controlled independently from the natural limbs.

In the last decade, research in neuroscience has shown that subjects can incorporate additional limbs in their body schema. In the right hand illusion experiment, synchronous stimulation of a subject’s hand and of a rubber hand placed besides it leads the subject to feel like the artificial hand is a part of their own body. These experiments are performed using passive extra limbs, and deceiving the sensorimotor system with carefully designed stimuli.

Supernumerary Robotic Limbs are a class of wearable robots consisting of additional robotic limbs which are wearable, powered and under the direct control of their user. Such systems provide both extra inputs (haptic and visual feedback) and extra outputs (new degrees of freedom) to the subject’s sensorimotor system.

The devices currently employed to increase the skills or performance of the human body can be divided into two broad categories: tools and wearable systems.

Tools can be passive (e.g. hammer) or actuated (e.g. power drill), and are designed to be manipulated and controlled with the extremities of the natural limbs. Tools are

not attached to the body, and when they are used they reduce the number of active degrees of freedom available to the human. These active motions are employed to control the tool. For example, while operating a power drill the degrees of freedom of the arm and hand are devoted to positioning the tool, and (in the case of the index finger) to controlling the spinning speed of the drill bit.

Wearable systems, on the other hand, are attached to the human body and provide direct assistance to natural joints. They can be unpowered (e.g. cushioned shoes, passive exoskeletons) or powered (e.g. active exoskeletons, exosuits). They are designed to assist or enhance the function of specific joints, such as ankle, knee or hip flexion/extension in the case of leg exoskeletons. Wearable systems do not reduce nor increase the number of active degrees of freedom available to the human. Since they are focused on supporting the natural movements of the body, they tend to mimic its kinematic structure and control strategies. Supernumerary Robotic Limbs are a third kind of augmentation device, which increases the number of active degrees of freedom available to the human user. Since the coordinated use of multiple limbs is essential for performing advanced tasks, the new active degrees of freedom are provided through additional powered limbs under the direct control of the human. This augmentation strategy is employed to expand the skill range of its users. 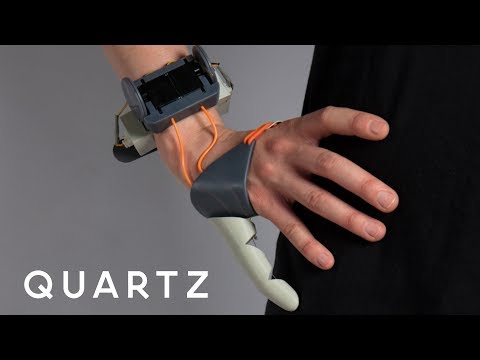 The illusion of owning a third arm