Subaru is an automobile manufacturing company founded in 1953 by Nakajima Aircraft Company. 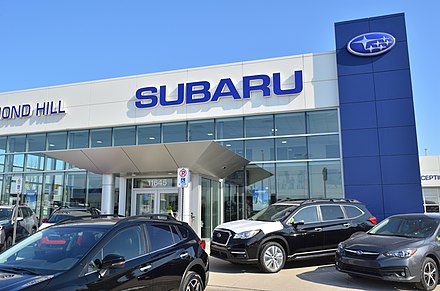 Subaru cars are known for their use of a boxer engine layout in most vehicles above 1500 cc. The Symmetrical All Wheel Drive drive-train layout was introduced in 1972. Both became standard equipment for mid-size and smaller cars in most markets by 1996. The lone exception is the BRZ, introduced in 2012 via a partnership with Toyota, which pairs the boxer engine with rear-wheel-drive. Subaru also offers turbocharged versions of their passenger cars, such as the WRX, Legacy and Outback XT, Ascent, and formerly the Legacy GT and Forester XT.

In Western markets, Subaru vehicles have traditionally attracted a small but devoted core of buyers. The company's marketing targets those who desire its signature engine and drive train, all-wheel drive and rough-road capabilities, or affordable sports car designs.

Subaru is the Japanese name for the Pleiades star cluster M45, or the "Seven Sisters" (one of whom tradition says is invisible – hence only six stars in the Subaru logo), which in turn inspires the logo and alludes to the companies that merged to create FHI. 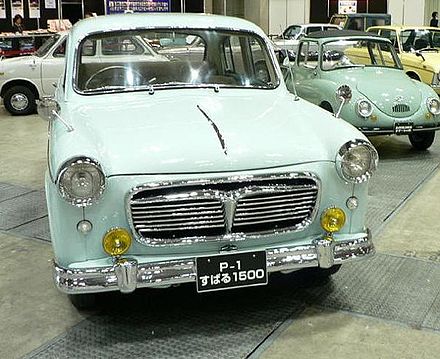 Fuji Heavy Industries started out as the Aircraft Research Laboratory in 1915, headed by Chikuhei Nakajima. In 1932, the company was reorganized as Nakajima Aircraft Company, Ltd and soon became a major manufacturer of aircraft for Japan during World War II. At the end of the Second World War, Nakajima Aircraft was again reorganized, this time as Fuji Sangyo Co, Ltd. In 1946, the company created the Fuji Rabbit, a motor scooter, with spare aircraft parts from the war. In 1950, Fuji Sangyo was divided into 12 smaller corporations according to the Japanese government's 1950 anti-zaibatsu legislation, the Corporate Credit Rearrangement Act. Between 1953 and 1955, five of these corporations and a newly formed corporation decided to merge to form Fuji Heavy Industries. These companies were: Fuji Kogyo, a scooter manufacturer; coachbuilder Fuji Jidosha; engine manufacturer Omiya Fuji Kogyo; chassis builder Utsunomiya Sharyo and the Tokyo Fuji Sangyo trading company.

Nissan acquired a 20.7% stake in Fuji Heavy Industries, Subaru's parent company, in 1968 during a period of government-ordered merging of the Japanese auto industry in order to improve competitiveness under the administration of Prime Minister Eisaku Satō. Nissan would utilize FHI's bus manufacturing capability and expertise for their Nissan Diesel line of buses. In turn many Subaru vehicles, even today, use parts from the Nissan manufacturing keiretsu. The Subaru automatic transmission, known as the 4EAT, is also used in the first generation Nissan Pathfinder. While under this arrangement with Nissan, Subaru introduced the R-2 (1969), the Rex and the Leone (1971), the BRAT (1978), Alcyone (1985), the Legacy (1989), the Impreza (1993) (and its WRX subtype), and the Forester (1997).

Upon Nissan's alliance with Renault, its stake in FHI was sold to General Motors in 1999. Troy Clarke of General Motors served as representative to Fuji Heavy Industries on their corporate board. During that time, Subaru introduced the Baja (2003), and the Tribeca (2005). The Subaru Forester was sold as a Chevrolet Forester in India in exchange for the Opel Zafira being sold as a Subaru Traviq in Japan. Also, the Chevrolet Borrego concept was presented in 2002, a crossover coupe/pickup truck being derived from the Japanese-market Legacy Turbo platform. During the brief General Motors period, a badge engineered Impreza was sold in the United States as the Saab 9-2X. An SUV (Subaru Tribeca/Saab 9-6X) was also planned but the Saab version did not proceed, and styling was recycled in the 2008 Tribeca refresh.

GM liquidated their holdings in FHI in 2005. Nearly all Saab-Subaru joint projects were dropped at that time, other than Subaru supplying parts for the Saab 9-2x. Toyota Motors bought a little over 40% of GM's former FHI stock, amounting to 8.7% of FHI. (The rest of GM's shares went to a Fuji stock buy-back program.) Toyota and Subaru have since collaborated on a number of projects, among them building the Toyota Camry in Subaru's Indiana U.S. plant beginning in April 2007. Subaru introduced the Exiga in 2008.

Toyota increased their share of FHI to 16.5% in July 2008. Subsequently, Toyota and Subaru jointly developed the Subaru BRZ, first sold in January 2012. Toyota sold the BRZ as the Scion FR-S until 2018, where it was renamed to the Toyota 86 due to the discontinuation of Toyota's Scion brand. Around the time of Toyota's increased ownership, Subaru also declared that they would no longer develop their own Kei cars and trucks, instead selling rebadged products from Toyota's Daihatsu subsidiary. This also allowed Subaru, a small manufacturer, to focus on their core of boxer-engined family cars. The last of Subaru's own kei vehicles to be built was the sixth generation Subaru Sambar, which was taken out of production in March 2012 after 54 years of continuous manufacturing in this category.

Some of the advertising slogans Subaru has used in the past include: "Inexpensive, and built to stay that way" (USA 1970s – early 1980s), "The World's Favourite Four Wheel Drive" (in the UK), "Plus on y pense, plus on a le goût de la conduire" (French: "The more you think about it, the more you want to drive it.") in French Quebec, "We built our reputation by building a better car", "What to Drive", "The Beauty of All-Wheel Drive", "Driven by What's Inside", "Think, Feel, Drive", "Love. It's what makes Subaru, a Subaru" (USA early 2010s) and currently "Confidence in Motion" in North America, "All 4 The Driver" in Australia, "Uncommon Engineering, Uncommon Stability, Uncommon Roadholding, Uncommon Sense" in the UK and "Technology that gives you Confidence in Motion" in Southeast Asia.

In the 1990s, an ad firm hired by Subaru found the all wheel drive cars were popular among lesbians. The company started including subtle marketing to this demographic.

According to Automotive Lease Guide, Subaru ranked second place in vehicles that have the highest overall predicted resale values among all industry and all luxury vehicles for MY 2009. The awards are derived after carefully studying segment competition, historical vehicle performance and industry trends. According to a study done by J.D. Power and Associates for the 2008 Customer Retention Study, Subaru ranked at 50.5%, which was above the national average of 48%.

Subaru launched an animation series Wish Upon the Pleiades Hōkago no Pleiades (放課後のプレアデス, Hōkago no Pureadesu, lit. 'After School Pleiades') developed jointly with Gainax. The 4-part mini episode series was released on YouTube on February 1, 2011. It featured a magical girl plot with Subaru as a leading protagonist.

Subaru Rally Team Japan led by Noriyuki Koseki (founder of Subaru Tecnica International, STI) ran Subaru Leone coupé, sedan DL, RX (SRX) and RX Turbo in the World Rally Championship between 1980 and 1989. Drivers for individual rallies included Ari Vatanen, Per Eklund, Shekhar Mehta, Mike Kirkland, Possum Bourne and Harald Demut. Mike Kirkland finished 6th overall and won the A Group at the 1986 Safari Rally. That year Subaru was one of the only manufacturers combining 4WD and turbo after Audi's successful quattro system had been introduced in 1980, but Audi withdrew from the WRC after safety concerns and Ford's serious accident early in the 1986 season. Subaru changed the rally model to Legacy RS for the 1990–1992 period and took part in the first complete season in the World Rally Championship with the same model in 1993.

Modified versions of the Impreza WRX and WRX STi have been competing successfully in rallying. Drivers Colin McRae (1995), Richard Burns (2001) and Petter Solberg (2003) have won World Rally Championship drivers' titles with the Subaru World Rally Team and Subaru took the manufacturers' title three years in a row from 1995 to 1997. Subaru's World Rally Championship cars are prepared and run by Prodrive, the highly successful British motorsport team. Several endurance records were set in the early and mid-nineties by the Subaru Legacy. The Subaru Justy also holds the world record for the fastest sub 1.0L car without a turbo: 123.224 mph average, it was set in 1989.

Subaru was briefly involved in Formula One circuit racing when it bought a controlling interest in the tiny Italian Coloni team for the 1990 season. The Coloni 3B's 12-cylinder engine was badged as a Subaru and shared the boxer layout with the company's own engines, but was an existing design built by Italian firm Motori Moderni. The cars were overweight and underpowered and the partnership broke down before the season finished. With the rise of rally racing and the Import scene in the US, the introduction of the highly anticipated Subaru Impreza WRX in 2001 was successful in bringing high-performance AWD compact cars into the sports car mainstream. Subaru supplies a factory-backed team, Subaru Rally Team USA for Rally America and has won the driver's title six times, most recently in 2011 with David Higgins. Grassroots Motorsports awarded Subaru with the Editors' Choice Award in 2002.

Since 2005, Cusco Racing have entered an Impreza and a BRZ in the Super GT championship. In 2008, the Impreza was the first 4-door and first 4WD vehicle to win a race.

Starting in 2006, Subaru of America (SOA), as the official distributor of Subaru vehicles in the United States participates in the Subaru Road Racing Team (SRRT) with a Subaru Legacy 2.5 GT Spec-B in the Grand-Am Street Tuner class. In 2010, SRRT campaigns a Subaru Impreza WRX STI in the Grand Sport class. In 2011, SRRT switched from the hatchback to a 2011 Subaru Impreza WRX STI sedan.

On 16 December 2008, it was announced that Subaru would no longer be competing in the World Rally Championships. The decision was made by Subaru's parent company, Fuji Heavy Industries (FHI), partly as a result of the economic downturn but also because it was felt Subaru had achieved its sporting and marketing objectives. Mr Ikuo Mori denied that alterations to the WRC technical regulations in 2010 or a rumored deterioration in the working relationship with Prodrive had any impact on the decision. He also said that the possibility of a Subaru car back in the top category of WRC in the future is not zero, but for this moment there can be no assumption of a comeback.

In 2011, Mark Higgins used a stock Impreza to set a lap record at the Isle of Man TT course. In 2016, Higgins again broke the record in a modified WRX STI. 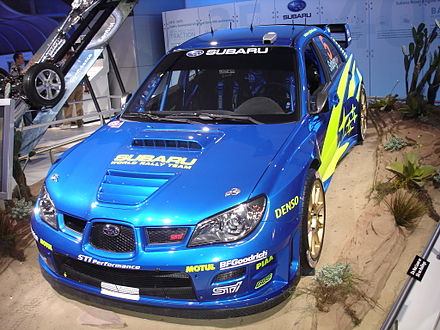 The Impreza has won hillclimbs such as the Silverstone Race to the Sky and Mount Washington Hillclimb Auto Race.