From the perspective of earth, (outer) space is a zone that occurs about 100 kilometers (60 miles) above the ground where there is no appreciable air to breathe or to scatter light.

Outer space, also known as space, is the expanse existing beyond Earth and other celestial bodies. Space is a hard vacuum containing various particles of low density, primarily consisting of plasma of hydrogen and helium. Other things existing in space are:

The average temperature of space is extremely cold and unfit for human survival, and is a result of background radiation caused by the 'Big Bang.' Space at baseline sits at 2.7 kelvins, or −270.45 °C; −454.81 °F. 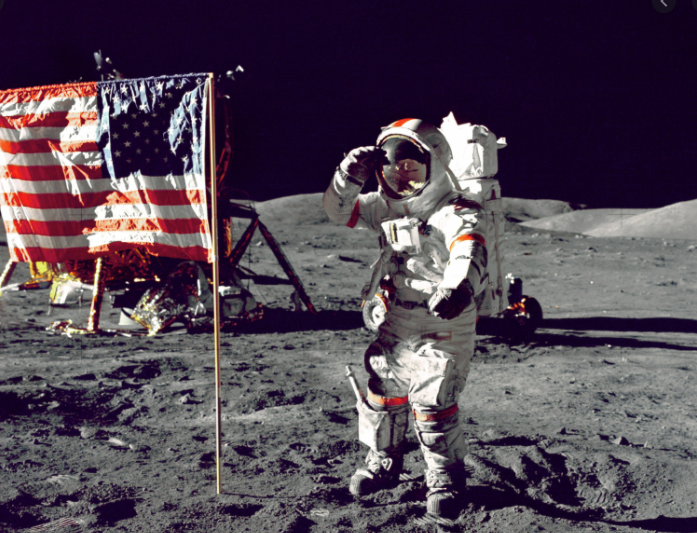 Human exploration of space began in the 20th century, after the invention of high-altitude balloon flight. Later, crewed rocket flights were launched and the first successful crewed space mission took place in 1961. The mission was completed by a Soviet Union astronaut Yuri Gagarin. In 1969, Neil Armstrong was the first person to set foot on the moon, during NASA's Apollo 11 mission. Due to the high costs of human space travel, human space exploration has been limited to low Earth orbit and the moon; however, uncrewed spacecraft have landed on all known planets in the solar system.

Launchers, also known as launch vehicles or carrier rockets, are rocket-propelled vehicles used to carry payloads from the surface of Earth into orbit or outer space. A launcher is actually a full launch system comprised of various parts, including:

Cislunar travel and exploration references travel or explorations occurring in the spaces between Earth and the moon. Cislunar travel is becoming more popularized by the private and public sectors due to the rising demand to commercialize space travel. The commercialization of space travel is aimed at making low-orbit space a premier destination for vacationing, cargo transport, and expansion in space-capable technologies.

Satellite control and data ingestion is a function of AWS Ground Control, an arm of Amazon that allows satellite communication, control, and collection of satellite data from a fully staffed station on Earth. The service is provided to allow companies to scale operations without having to manually manage systems themselves.

Weather tracking is the action of predicting weather based on various technologies like satellites, radiosondes, weather radar, and other ground-based technology. Satellite weather tracking is based in space and provides weather reporting services, like the National Weather Service (NWS), with a global picture of potential incoming weather patterns. The ground-based methods provide NWS with more localized weather information.

Space communications is made up of six different parts:

The concept is similar to wireless internet, in which the router will send information from the internet and transmit the message on the user's computer, providing the data the user was looking for. Space communications are performed on a maximized scale, in comparison.

Space vehicles with habitats provide living spaces for manned space crafts. Habitats include sleeping quarters, bathrooms, and other living comforts. Space habitats are also being built to have humans inhabit outer space. Space settlements would have more advanced living spaces than space stations or spacecraft as they are intended for more permanent living scenarios.

Space vehicles for transportation can include ships transporting humans or payloads. Payloads are often times shipped into space in unmanned spacecraft. Other space vehicles transport humans to various locations like the international space station, or to the moon for lunar exploration.

Title
Author
Date
Publisher
Description
Amazon bolsters delivery, fulfillment network ahead of festival season
Madhurima Nandy
October 1, 2021
mint
Amazon has increased its storage capacity by 40% with more than 60 fulfillment centers in 15 states, offering 43 million cubic feet to its sellers
We must subsidize and regulate space exploration
Annie Saunders
September 8, 2021
TechCrunch
Space can and should be about much more than giving the 1% another Instagrammable moment and increasing the wealth of the billionaires who provide the service.
Now, avail Aadhaar services via SMS, check process to generate virtual ID or lock Aadhaar
Zee News
August 25, 2021
Zee News
Aadhar card, which is issued by the Unique Identification Authority of India (UIDAI), has become one of the most important documents for Indian citizens.
French Astronaut Shares Images of Venice from Space and they are Mesmerizing
Trending Desk
August 19, 2021
News18
French astronaut Thomas Pesquet, who is presently aboard the ISS, recently showed a few beautiful images of Italy's floating city Venice.
Space conference at MSOE highlights student prototype that could one day see Mars - Space Bollyinside
August 13, 2021
Bollyinside - US Local News & Breaking News Stories
A rover is a vehicle that drives through extraterrestrial terrain. Stroupe drives Curiosity a rover on mars that takes images and collects different
SHOW MORE