Shawarma — what is it?

Shawarma is meat fried on a vertical grill in lavash, thin pita, unleavened flatbread, seasoned with vegetables and sauces. The word shawarma is an Arabic transcription of the Turkish word çevirme [tʃeviɾˈme], which translates as "to turn around". Here we are talking about a rotating grill. And most importantly — vertical.

First, aged and marinated meat is placed on the spit alternately with strips of fat. Considering the religious dietary preferences of the country of origin of the dish, all types of meat except pork are used. Most often — chicken or beef.

Sometimes onions, lemon and tomatoes are skewered on top of the meat - just for beauty. The spit rotates around its axis, the meat is slowly fried from all sides at the electric grill. Previously, a cage with burning coals was used as a heat source. From the total meat mass, slices of meat are shaved off in portions with a large knife or a small circular saw from top to bottom. 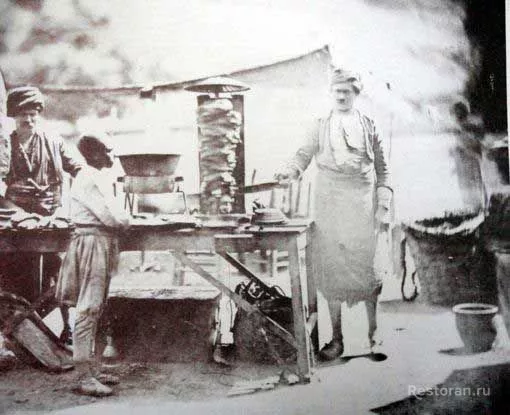 Cooking the first shawarma on the streets of Istanbul

The technique of horizontal roasting meat on a spit has its roots in ancient times. All over the planet, meat impaled on skewers and skewers has been fried for thousands of years. But the vertical grill, from which the shawarma began, appeared in the first half of the 19th century on the territory of the Ottoman Empire, modern Turkey. The birthplace of the vertical grill is often called the city of Bursa, and the author is its native Iskander Effendi, who fried lamb on a vertical grill and together with the dish had a stunning success. The vertical kebab was named döner kebab. Innovation has crept across the countries of the Middle East. Wrapping it in pita bread, pita bread, sandwiches and other types of bakery products began much later.

A hundred years later, doner kebab began to be served in the Istanbul meat restaurant Beyti by restaurateur Beiti Guler. By the way, very successful! In the 50s, local hard workers, top managers, touring movie stars and prime ministers flocked to the 20-seat restaurant for the best kebab in the city.

In the mid-60s, Turkish migrant workers "took away" from Istanbul the technology of cooking meat on a vertically standing spit to Europe. The first kebab shop in London opened in 1966. And in the early 70s, a shawarma appeared in Berlin, which we know today - dürüm or dürme, translated from Turkish — "roll". Sliced pieces of meat with a flatbread were transformed into a bundle with abundant stuffing, salad and sauces at a minimum price. 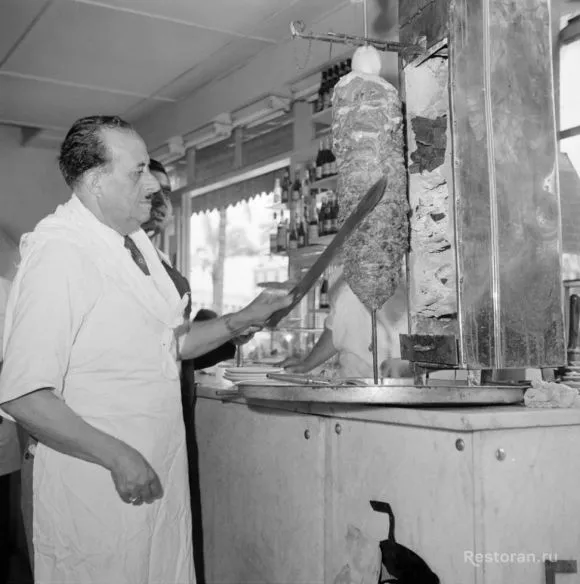 There are even more styles and varieties of shawarma than there are names in different languages. Every tent in Europe, America or Asia turns weighty edible bundles with its own set of ingredients, type of bread and sauces. Food of this format is invariably the most affordable, simple and convenient for tourists and locals in any region.

In Greece, giro or gyros is prepared - from Greek. "turn". Along with slices of meat, an elongated cutlet of minced lamb or beef is often used for filling. Lula in our way. In the filling - tomatoes, onions, sometimes French fries and necessarily zaziki sauce. Everything is wrapped in Greek pita bread.

The wave of Lebanese immigrants who poured into Mexico in the late 19th and early 20th centuries brought with them the vertical grilling technique. The new residents had no religious dietary restrictions, so they fried pork. This is how al-pastor meat appeared. In the 1960s, the Mexican descendants of these immigrants began to open their own restaurants and combine their gastronomic heritage with Mexican cuisine: meat marinated in local spices is served in tacos.

Burrito - a bundle stuffed with tortilla corn tortilla - first appeared in the Mexican states at the beginning of the 20th century. The name itself translates as "little donkey": the variety of filling indicates the endurance of the animal - the donkey can carry a lot of things. But authentic Mexican burritos are usually small and thin, stuffed with just a few ingredients: meat or fish, potatoes, beans, soft cheese and chili. 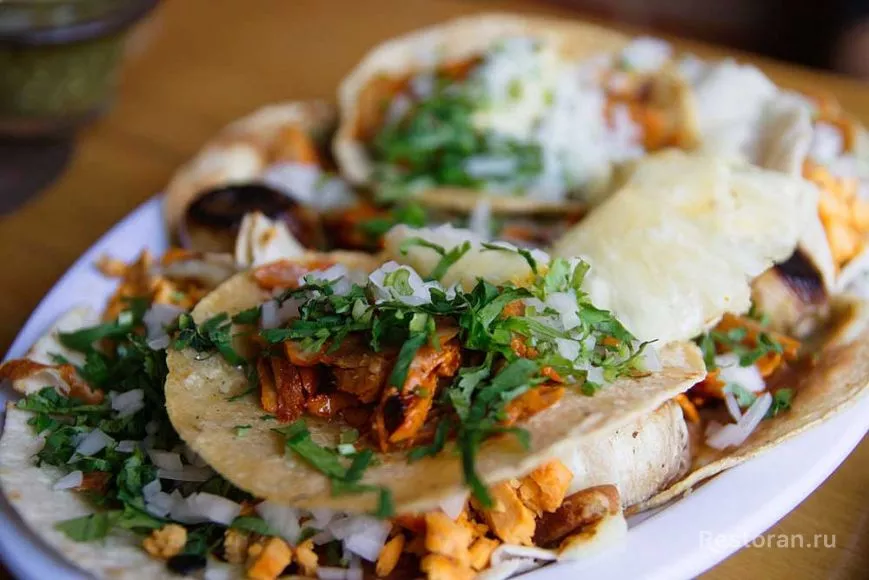 Below are photos of shawarma from restaurants in Moscow 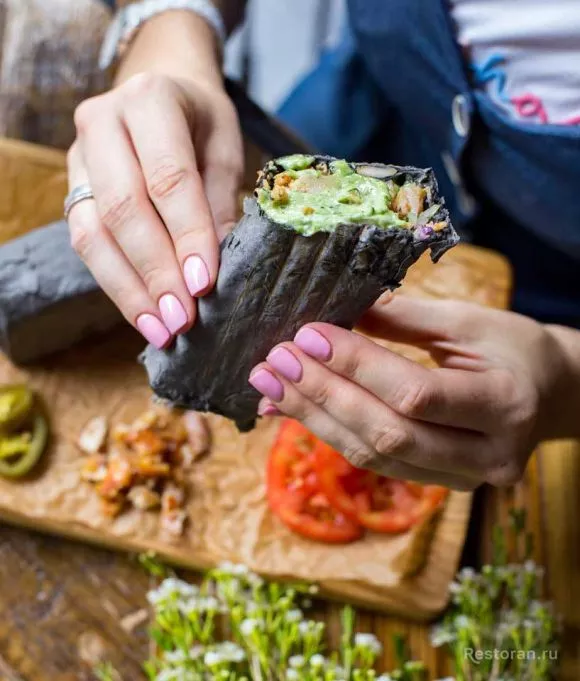 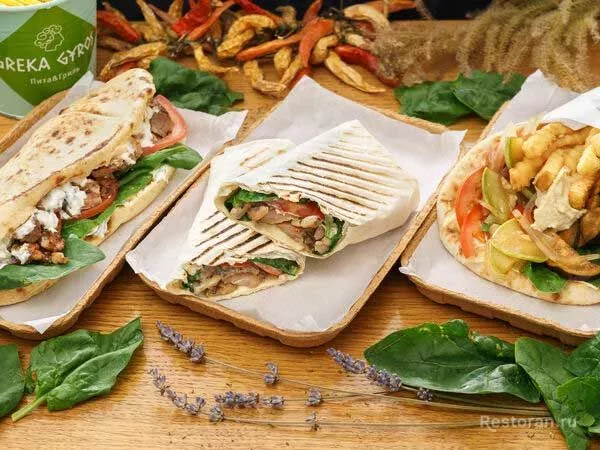 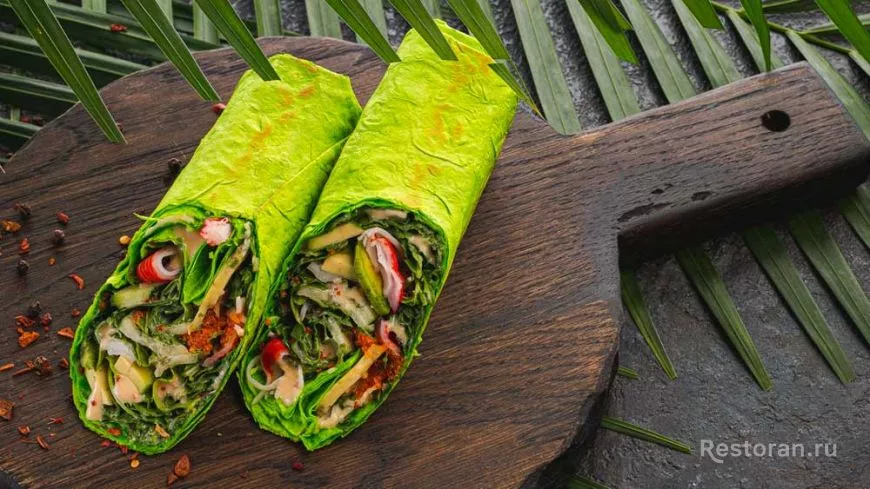